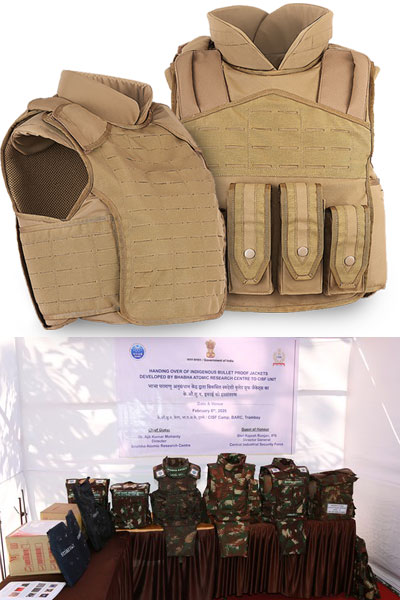 As India came under attack by the Covid-19 virus, reports started surfacing of doctors not having adequate protective gears. The World Health Organisation (WHO) had instructed every country to stockpile medical equipment rather than export it. This scenario, familiar across the medical world presently, found resonance among the Indian Army and paramilitary forces. Lack of adequate safety gear is a common complaint among the forces.

From bullet-proof jackets to eye protection and helmets, there is a list of primary armour that the Indian forces need while tackling different operations. Recently, in February 2020, the Comptroller and Auditor General (CAG) of India alerted the government regarding the “huge shortages and grossly inadequate reserves of specialised winter clothing, snow goggles, multi-purpose boots and other equipment for Army troops deployed in high-altitude areas like Siachen, Ladakh and Doklam.” This report also suggested how the forces were not even getting the requisite amount of calories from their meals. The CAG had also added in its report that delayed procurements led to a shortage of essential clothing. Also, other items like face masks, jackets and sleeping bags were of out-dated specifications because of delayed procurement process.

There have been multiple cases in India that have proven at some point in time the fact that forces and state police have had to face combat operations without body armours. In 2015, in Punjab’s Gurdaspur a group of terrorists forced their way into a police station and turned it into a shelter. For 11 hours, the police fought the opponents without having helmets and bullet-proof jackets. It was, for many, a stark reminder of the older lethal incidents.

A two-member High Level Enquiry Committee aka the Pradhan Inquiry Commission was set up by the Maharashtra government post 26/11 attacks in Mumbai to determine the loopholes on part of the security forces. While there were a slew of things that the committee pointed out, it also mentioned the inadequacy of the protective gear like bullet-proof jackets to withstand grenade attacks. It was also later reported that jackets worn by many of the deceased police personnel were not built to protect them from AK-47s. They were an older version ordered in 2001 and could only resist the 9mm pistol. In fact, the Mumbai police had bought 110 defective jackets, a Public Interest Litigation (PIL) found later.

In the past, more than once it was brought to light that Indian security personnel had to change bullet-proof jackets and equipment. It was also pointed out that the jackets are often heavy and bulky which restrict the mobility of personnel. Year after year, security personnel complained of body armour shortage. In January 2016, while a Right to Information (RTI) plea revealed that the Gurgaon police had only 17 bullet-proof jackets for its 4,000 personnel and that they had not made a single purchase of the safety gear in the past 10 years, in February the same year, the Central Reserve Police Force (CRPF) complained of a “significant shortage” of bullet-proof helmets. A whopping 98 per cent were actually required.

Ironically, India is considered number one supplier of body armour technology. In fact, the country was supplying advanced body protection like bullet-proof jackets and helmets to more than 230 forces in over 100 countries. The users of these were the British, German, Spanish and French armies and police forces in Japan and the US.

Back home, at a time when companies such as MKU were looking for global recognition, Indian forces were struggling with limited body armour. Often, the Indian acquisition process is blamed for the delays.

In 2009, the army had identified a shortage of bullet-proof jackets. The ministry of defence (MoD) had then, in fact, shortlisted and concluded price negotiations and had decided to buy 25,000 pieces. This deal, which was being made as an emergency procurement, finally came through in 2016. At that time, the army needed 3.5 lakhs of vests. The procurement of 50,000 vests was done in 2016. According to the government, the earlier tender of procuring more than 1.86 lakh jackets was scrapped because the vendors who were shortlisted failed to clear field trials and meet modern requirements. Various sections of the society expressed disappointment over India’s arduous and dull procurement process.

After a long wait of nine years, in April 2018, the government finally signed a contract and gave the order of producing body armour to SMPP Pvt Ltd, an Indian firm, under its ambitious Make in India programme. The deal was signed at Rs 639 crore. After signing the contract, the company revealed that it would use Boron Carbide Ceramic to make bullet-proof jackets. The army had released a statement saying that these jackets would provide “immense protection and flexibility to soldiers operating in different operational situations ranging from long distance patrolling to high risk room intervention scenarios”. When the contract was signed, SMPP had already supplied bullet-proof products to the Indian Air Force (IAF), Naval Commandos, paramilitary forces like the Border Security Forces (BSF), CRPF, Central Industrial Security Force (CISF), Indo-Tibetan Border Police (ITBP), National Security Guard (NSG) and state police forces in Gujarat, Uttar Pradesh, Maharashtra, Jammu and Kashmir, Telangana and West Bengal.

Later it was found and even agreed to by the company that at least 40 per cent of its raw material including the fabric and carbide powder came from China. However, this was not agreed upon during the selection process. The jackets at that time were presented with raw material obtained from Europe and the US. The company had clarified to an Indian newspaper that it had in fact brought down costs by giving the order directly to the manufacturer instead of western countries who, too, were getting them from China. In October 2019, the company made its first delivery of 40,000 jackets to the troops carrying out anti-terror activities in Kashmir.

In a bid to modernise weapons and weapon systems, companies manufacturing them have invented newer and lighter versions of equipment so they are easy to carry. Similarly, bullet-proof jackets used to be heavy, making it difficult for soldiers to move. However, now various global and Indian manufacturers have come up with lighter and comfortable vests and these are at least 50 per cent cheaper than what the soldiers used earlier.

Ordnance Factory Board (OFB) along with Mishra Dhatu Nigam (MIDHANI) and transfer of carbon-nanomaterial technology from Bhabha Atomic Research Centre (BARC) have developed state-of-the-art bullet-proof jackets called Bhabha Kavach (Light weight Ballistic Resistant Armour Panel). These can withstand eight 7.62×39 mm bullets fired from an AK-47 rifle from a distance of 5-10 metres, which is now the specification of almost all newly produced Indian bullet-proof vests. It can also withstand the 5.56 mm bullet of the INSAS or even the 7.65 mm bullet of self-loading rifle (SLR). The jacket is based on indigenous hot-pressed boron carbide and carbon nanotube technologies. It is being seen as a notable development as the older, steel-armoured jackets weighed at least 10-17 kg and these weigh 9.2 kgs (6.6-6.8 is said to be its nominal weight). Bhabha Kavach offers Level III plus bullet-proof jackets in India and has cleared all the ballistic tests required as per the National Institute of Justice (NIJ) and the Bureau of Indian Standards (BIS).


MKU Systems, a defence company with manufacturing facilities at Kanpur in India and Germany, has come up with lighter bullet-proof jackets. The company is, in fact, one of the firms that has been exporting international standard bullet-proof jackets to a number of foreign countries. MKU Systems was chosen to supply more than 1.58 lakh ballistic helmets to the Indian Army and navy over a span of three years in 2017. This was the company’s first-ever defence order. Out of these, nearly 6,000 helmets would be used by the navy. These helmets provide protection against fragments and 9 mm ammunition and weigh 1.2-1.4 kg as opposed to the earlier Patkas that the army used.

Apart from body vests, MKU also offers P-1602 Armour Insert for rifle protection at less than one kg of weight and Foldable Ballistic Shields and Ballistic Briefcase that could be used during counter-terrorism, insurgency and riot control. MKU’s Demining Suit designed to tackle landmine threats offers overall protection including front, back, collar, shoulder, arms, groin and legs. Foldable Ballistic blanket is another product that can act as a shield in ‘high-risk areas’ and can be ‘thrown over windows, doors, walls and cars to act as shields.’

BAE Systems have developed Liquid Armour that is lighter and flexible. The liquid hardens when it is struck by a speedy projectile and absorbs the energy or the shockwave that is generated. The liquid used in the vests is Shear Thickening Liquid (STF), a gel-like substance.

The STF in bullet-proof armour is being pursued seriously and a few countries like the US, the UK and Poland have been experimenting with it. The latest experiment has been carried out by researchers at Moratex Institute, where they have developed ‘super-light and flexible’ STF that turns solid until a bullet strikes. It can safeguard the soldier by stopping the bullet fired at 450 metres.

Honeywell offers Spectra Shield and Gold Shield ballistic materials that are ‘high-performance’ composites that offer comfort and flexibility. These vests have in them Honeywell’s patented technology by the name ‘Shield’. According to its official website, ‘Gold Shield materials provide a balance of performance and value’ and ‘Spectra Shield contains Honeywell Spectra fibre, which is pound for pound up to 15 times stronger than steel yet light enough to float’.

Protective gear is a right that every military personnel should have. The government should speed up its procurements and at the same time invest in R&D to manufacture user-friendly gears. Progress has been made, but since we have huge demands to fulfil, it is not sufficient. It’s time that all agencies concerned and involved put their heads together to better protect our forces.