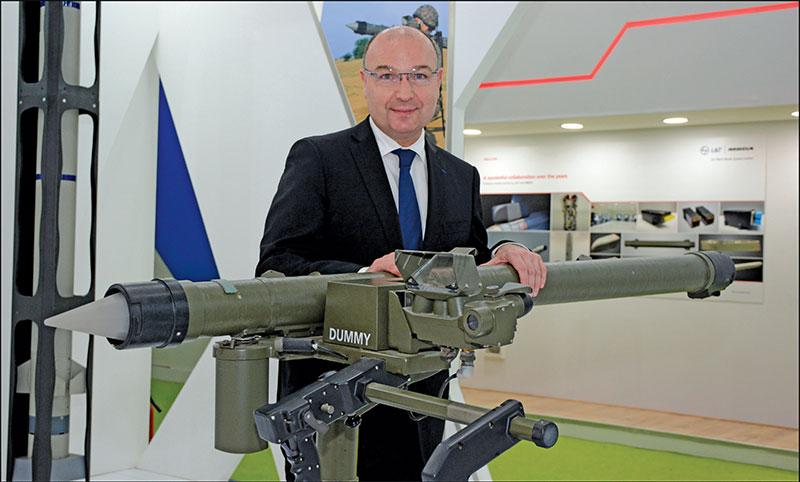 Loïc Piedevache, Country Head, India, MBDA, spoke to FORCE about the plans of the company in strengthening the defence industrial capabilities of India. Piedevache says MBDA has been actively working in partnership with India’s government and industry to build India’s defence industrial capabilities for over 50 years. He said the company is recognised world-wide as an absolute leader in the field of missile technologies.

“We are also recognised as being the only truly integrated multinational company in the defence sector – cooperation is in our DNA in a way that is unique in the defence sector, and particularly in the field of missiles. This makes us uniquely able to partner with India, to work with the DRDO and to support the development of India’s public and private defence-industrial capabilities. We have the technological know-how needed to transform India’s industry, we have the experience of making partnerships work for the long-term, but most importantly we also have the right attitude. We view our relationship as one of true partners, not of buyer and seller,” he says.

According to Piedevache, MBDA has a dedicated and strong industrial cooperation and offset (ICO) team that works solely on partnerships with India. “This MBDA ICO team has delivered extensive and significant transfer of technology to develop India’s defence-industrial capabilities. This includes the extensive manufacturing by Indian industry of 15 major sub-assemblies of MICA missile covering various complex technologies such as mechanical, electrical, electromechanical and pyrotechnic items. Similar transfers to build India’s defence-industrial capabilities has also occurred on the Mistral and ASRAAM missiles, including ToT for setting up industrial capabilities, complete missile integration and final assembly and test,” he explains.

MBDA’s joint venture with Larsen & Toubro – L&T MBDA Missile Systems Limited – is already active, and has responded to several requests for information (RFIs) for major procurement programmes for the Indian armed forces. And the company is planning to open a dedicated new facility for the JV in due course.

Speaking about the significance of the company’s partnership with L&T, he says L&T MBDA Missile Systems Ltd will develop Indian defence capabilities in the missile sector. “Larsen and Toubro is already part of our global supply chain on several missiles, and now we look to build further through engagement in a major new missile programme for the Indian armed forces. L&T MBDA Missile Systems Ltd is currently focusing on three main programmes for the Indian armed forces, namely: our offer of ATGM5, the world’s only true 5th Generation Anti-Tank Missile as an Indian Designed Developed and Manufactured (IDDM) product under the ‘Make in India’ programme; offering Exocet MM40 Block 3 for the Indian Navy’s Medium Range Anti-Ship Missile (MRAShM) requirement; and the JV’s offer of Sea Ceptor for the Indian Navy’s Short-Range Surface to Air Missile (SRSAM). We look forward to further positive developments on these and other programmes in the future, which should give us a good platform to the JV to export.


On being asked how the MBDA ventures in India will eventually help make India self-sufficient in missile production, Piedevache says MBDA is a world leader in the field of missiles and missile systems, and naturally this is the focus of the company for both industrial partnership and for joint research & production. “Missiles and missile systems, however, covers a very broad array of technological areas, which has relevance for many wider fields of defence production and self-sufficiency. An excellent example of this is the bid of L&T MBDA Missile Systems Ltd of ATGM5, the world’s only true 5th Generation Anti-Tank Missile. ATGM5 is being offered as IDDM product under the ‘Make in India’ programme, the highest level of indigenisation under the programme. ATGM5 may be a missile, however, if you look at its unique features – network enabled with datalink, high-performance electro-optical seeker, multipurpose warhead with selectable effects – you can see that many of these technologies have relevance to India beyond purely the missile domain,” he adds.

MBDA has an extensive network of business partners throughout India, which is increasing year on year. The company says the extensive Indian supply chain will be able to support its JV initiatives and it is ready to fulfil ‘Make in India’ requirements through this JV with L&T. “We are in an on-going dialogue with a large number of Indian enterprises over partnerships on missile technologies that would support the ‘Make in India’ programme. In addition, we will continue to work with Indian public sector entities for local production, development and partnership, says Piedevache.

“If you look at the history of MBDA and India, whether it is the 40,000 MILAN anti-tank missiles built in India with BDL, or us opening our global supply chain to Indian partners on the MICA and ASRAAM missiles, our defence industrial relationship with India has always been one of partnership. This is something we plan only to continue, and our joint venture with L&T – L&T MBDA Missile Systems Limited – is a brilliant example of this,” says Piedevache.