Indian Army will be getting the latest BRAHMOS Block III variant

The land-launched land-attack variant of the BRAHMOS, the Block I, was first inducted into the Indian Army in June 2007 after a series of successful test launches, proving the missile’s manoeuvring power, precision hitting of the target, and other operative capabilities. In this defence developmental milestone of India, the then President Dr APJ Abdul Kalam handed over a replica of the mobile autonomous launcher (MAL) of the BRAHMOS land variant to the then Chief of Army Staff, General J.J. Singh, symbolising the commencement of delivery to the Indian Army 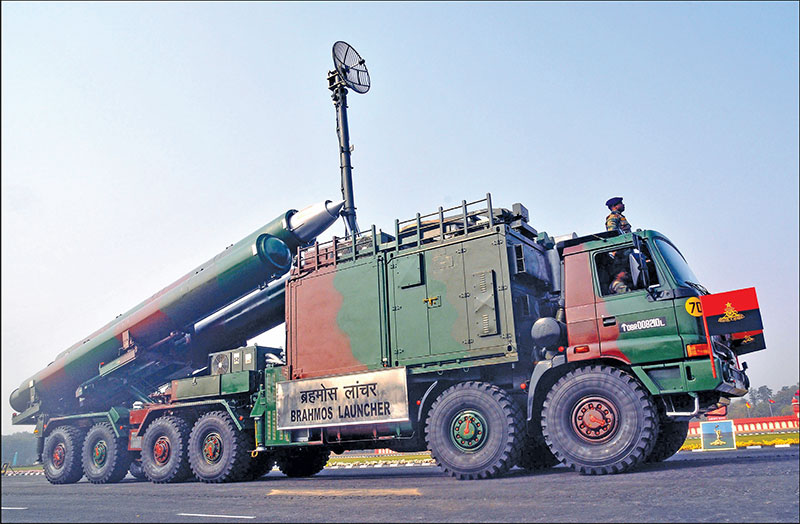 The land-launched land-attack variant of BRAHMOS utilises a Land-based Weapon Complex System. The system comprises 4 to 6 Mobile Autonomous Launchers (MAL) controlled by a Mobile Command Post (MCP), and a Mobile Replenishment Vehicle (MRV). Three BRAHMOS land-attack missiles placed in three independent containers are installed on the MAL. The indigenously-developed launcher is built on an all-terrain high-mobility TATRA vehicle. The missiles can be fired in single or salvo of 2 to 3 seconds within four minutes of receiving the command, depending on the commander’s input it can fire towards a single or three different targets.

In March 2008, the more advanced Block II version of the BRAHMOS Land Attack Cruise Missile (LACM) was successfully test launched by the Indian Army at the Pokhran firing ranges. In 2009, after 2 more tests with the Block II, under the supervision of founder-CEO and MD, BrahMos Aerospace, Dr A Sivathanu Pillai, the Indian Army green-lighted the induction of the more advanced Block II variant into two more regiments. The Block II version of BRAHMOS introduced target discrimination and steep-dive capabilities. The complex trajectory manoeuvres and steep dive capabilities of the BRAHMOS Block II were successfully tested in September 2010 wherein BRAHMOS Block II made history as the first cruise missile to achieve supersonic steep-diving capabilities. The latest version of BRAHMOS, the Block III + variant, was first tested by the Army in December 2010 wherein the Block III successfully demonstrated its mountain warfare capability with upgraded software and a new advanced guidance scheme incorporating large scale manoeuvres and steep dive capability in high-altitudes coupled with precision strike capability. The Block III’s land attack version was successfully tested for its deep penetration capabilities by the army in November 2013. By this time, the Indian Army had regiments already inducted and operationalised.


BrahMos Aerospace crossed another developmental milestone in March 2017 when an enhanced version of the BRAHMOS, the BRAHMOS ER (Extended Range), was successfully test fired by the army from the Integrated Test Range Chandipur. In this historical first, the BRAHMOS ER was able to accurately hit targets at ranges much further than the current range of 290 km with a supersonic speed of 2.8 mach. This was a significant moment for the entire country because this was the first time India tested a longer range cruise missile after having joined the Missile Technology Control Regime (MTCR) in 2016.

In March 2018, the Indian Army, along with DRDO and BrahMos Aerospace, successfully flight tested the latest land-attack variant of BRAHMOS fitted with an indigenous seeker. The new ‘made-in-India’ seeker used in the test was designed by BrahMos Aerospace in partnership with the Defence Research & Development Laboratory (DRDL) and made by Electronics Corporation of India Ltd (ECIL). Recently in July 2018, BRAHMOS was successfully test fired by the army as part of its service life extension programme. At present, the Indian Army has regiments of BRAHMOS Block I and Block II and is currently in the process of inducting the latest Block III variant.