In his last press conference as COAS, Gen. M.M. Naravane stands by the reforms started by the CDS

In his last press conference, the Chief of Army Staff, Gen. M.M. Naravane, due to retire on 30 April, said that there were positive developments along our northern and western borders. India has continued to maintain the highest levels of operational preparedness on the northern borders, at the same time engaging in dialogue with the People’s Liberation Army (PLA), resulting in mutual disengagement at many locations.

Even as the virtual press conference was going on, 14th round of Corps Commander-level talks were under way between India and China in Chushul-Moldo on disengagement at Patrolling Point 15 (Hot Springs) in eastern Ladakh. Gen. Naravane said that while partial disengagement had taken place, the threat by no means had reduced, though the force-levels were nearly the same. Threat assessment and internal deliberations resulted in reorganisation and realignment of forces in view of PLA’s forces and infrastructure. Up-gradation and development of infrastructure along the northern borders is being carried out in a holistic and comprehensive manner. This includes roads, tunnels, all-weather connectivity, strategic railway lines, additional bridges across the Brahmaputra River, storage facilities for fuel, lubricants and supplies. He called this an ‘all-round, holistic development’. Efforts are also being made to ensure the availability of dual-use infrastructure in the civil domain. 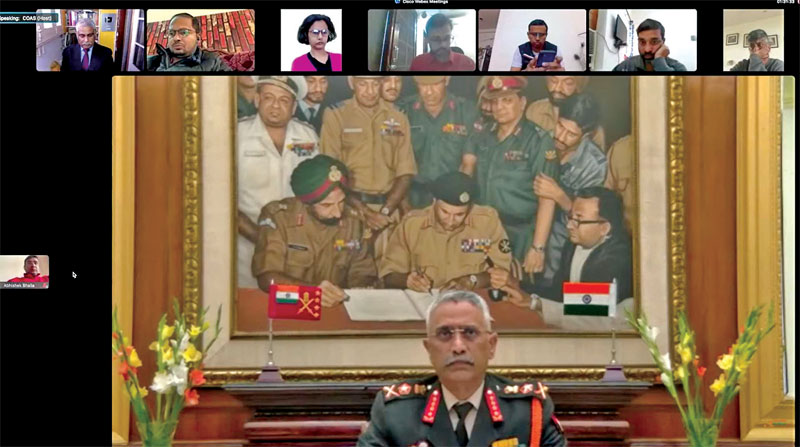 Along the Line of Control (LC) on the western front, the understanding between the Director Generals of Military Operations of India and Pakistan in February 2020, has resulted in marked improvement. Still, “there is an increase in concentration of terrorists in various launch pads and repeated attempts at infiltration across the LC, exposing the nefarious designs of our western neighbour. But we show zero tolerance for terror and have committed ourselves to extract dire costs.” Although the ceasefire violations have come down at the LC, he said that the proxy war is continuing and nearly 350-400 terrorists are present at various launchpads or training camps across the border.

On the security situation in Jammu and Kashmir, he stated that there is a progressive improvement, though there have been efforts to give an indigenous hue to terrorism by setting up a façade of proxy terror Tanzeems, but without any public support. Various other hostile elements re-energised their attempts at disrupting peace mainly by targeting minorities, non-locals and migrant labour, though we have been able to counter these challenges.”

Speaking about the north-eastern theatre, he said that the overall security situation was under control there. Robust security posture significantly curtailed the operation space for terrorists. There has been a graduated de-induction of Army units,  and  they are now free to concentrate on their primary task. On the India-Myanmar front, which is an important facet of India’s security calculus, he said that a new impetus was being given to the border-guarding role by Assam Rifles, progressively increasing the number of  battalions deployed for border guarding.

Calling the Oting incident in Nagaland ‘regrettable’, where 13 civilians were killed by the 21 Para Special forces on 4 December 2021, he said that the Army remained committed to the security of countrymen even during the conduct of operations. “We have SOPs that encapsulate our operational experience which has been refined over a period of time and appropriate action will be taken and corrective measures instituted to further refine peace, based on the outcome of the investigation,”. Reiterating that the Nagaland incident was highly regrettable he said, “I would like to clarify that the law of the land is paramount, and we would always uphold that and take action as required.”

Overall, in line with the Army’s operational realities, the force has undertaken reorganisation and rebalancing of the forces. Reorientation of additional forces to the northern borders has been carried out, while retaining our capability for punitive strikes on the western front. ‘IBGisation’ along the western and northern borders will soon come to fruition. ‘IBGisation’ is a term used for ICADIC Battle Groups (IBG), which is one of the war-fighting transformations by the Indian Army.

He said the Indian Army stands fully committed to synergy with the other two services, which was one of the recommendations of the Kargil review committee. It was for this that headquarter IDS was formed and the post of CDS created.

He said that the crisis on the northern border had given the Army an opportunity to fast-track infrastructure development and undertake doctrinal reviews and plug various operational voids through emergency and fast track procurements. He said in case of procurements, the Army was acting in line with Atmanirbhar Bharat by ensuring that the maximum number of orders go to the Indian industry. In the current financial year, he said, out of the 20 Acceptance of Necessity (AoNs), 19 were in the ‘Buy Indian’ category. Regarding inclusion of new technologies in the Army, he said, “We have taken significant steps to leverage artificial intelligence (AI), 5G, quantum technology to gain an edge over our likely adversaries and better management of forces.”

In response to a question on women officers, he said, “In order to provide equal opportunities to them, they have been granted permanent commission and can aspire to attain higher ranks within the armed forces and shoulder higher responsibilities too.” “Grant of permanent commission,” Gen. Naravane added, “to the officers is also underway as are the preparations to induct women cadets to the National Defence Academy (NDA) from June 2022.” After completing training, the first batch of women officers in the Corps of Military Police have also joined the units and are performing ‘exceedingly well’.

As far as preparedness along the northern borders was concerned, he said, “In the last year-and-a-half, our capabilities have increased manifold as far as our northern front is concerned.” Regarding the ongoing series of talks with China, he said that this mechanism is very important as it shows that the differences could be resolved by talks. He said that India and China have to keep talking to each other. “Every time we talk to each other, we understand viewpoints, perceptions and differences. Every time we have this dialogue, those differences keep getting narrowed down and then we reach consensus and agreement.” Despite this, he added that it was unreasonable to expect that every round will have an outcome.

Regarding the new Chinese border law that came into force from January 1, he said that it was not legally binding on India. “This law will have no bearing on our bilateral relations, and we do not accept it as such.” He added, “India and China have many other agreements and protocols which pre-date this new law that they have passed. And any new law which is not binding on other countries, and which is not legally tenable and is not in keeping with the agreements that we have had in the past, obviously cannot be binding on us.” As far as the military ramifications are concerned, he said, should there be any fallout in the military domain, we are adequately prepared to deal with it.

Regarding China’s constructions within Indian territories, he said, “The MEA has amply clarified our position. This is arising because the LAC is not demarcated and there are different perceptions on where the border lies.” He added, “As long as the boundary question remains unresolved, such issues will keep cropping up. The long-term solution for this is to resolve the border question once and for all rather than every now and then this becoming a point of difference and a pinprick in our bilateral relations.”

Regarding demilitarisation of Siachen Glacier, where India has deployed troops for over three decades against Pakistan, he said, “We all know the situation at Siachen Glacier occurred because of unilateral attempts by Pakistan to change the status quo.” He added, “We are not averse to demilitarisation of the Siachen Glacier (where Indian and Pakistani troops are face to face all along the glacier), but a precondition of that is to accept the Actual Ground Position Line (AGPL). Pakistan has to accept what are their positions as well as our positions and both the sides have to sign on the dotted line before any kind of disengagement takes place.” He said that this was quite parallel with what was happening in Eastern Ladakh.

He said that India has to stay abreast of emerging technologies like drones for operational preparedness. “We will not be found wanting in drone warfare should the need arise.” Quantum technology is another emerging technological field that the Army is actively engaged in.

The Army Chief also stated that the army is at the stage of formulating the mission objectives of the Integrated Capability Development plan holistically as a border specific threat and not as individual service or in specific numbers.