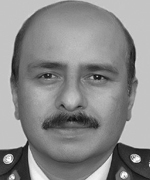 One of the first comments made by the recently instituted Chief of Defence Staff (CDS) was the need for establishment of an Air Defence Command (ADC) in the country. This has been a surprising development for an arm, neglected since the early Nineties in India, and the think tanks in the media have started speculating as to what should be the structure of ADC in India.

Although Operation Desert Storm established the superiority of a well-established air force running through a weak air defence of Iraq post suppression of whatever air defence it had, the point for a much-needed air defence and missile defence was not lost on the gulf countries and China. The result was the shooting down of the US Navy RQ-4A high altitude Remotely Piloted Aircraft (RPA) by Iran in June 2019. Although, the US RPA was a subsonic, non-stealth aircraft, the fact still remains that it cannot fly freely in a designated zone where advanced surface to air missiles (SAM) have proliferated. That brings us to the issue of the need for an efficient air defence system as a country.

The Union War Book in India clearly states that the overall responsibility of the defence of the Indian air space is that of the Indian Air Force (IAF), although the execution of this defence would be within the core competency of each Service to operate in its own battlefield. This owes to the uniqueness of each Service. For air defence (AD) the entire country is divided into Air Defence Zones and Areas controlled by Air Defence Control Centres and Direction Centres.

Till now, individual Services have been responsible for training and procurement of equipment which they feel is required for protecting their assets. With the authority for prioritisation of acquisition being the responsibility of the CDS, it makes sense to optimise the AD resources, procurements and have common training and equipment philosophy. This would ensure that spending is rationalised. Presently, each Service has a wide array of AD weapons sourced from different countries. The Indian Army is equipped with vintage guns sourced from Swedish Bofors (L70), erstwhile Soviet Union (Zu-23, Zsu-23-4 Schilka, Tunguska) and missiles from Soviet Union (Strella, Igla 1M, Strella 10M, Kvadrat, Tunguska and OSA-AK), indigenous missiles like Akash and recently contracted Medium Range SAM (MRSAM), a joint effort by India and Israel. The radars come from indigenously made updated USFM, Fly Catcher, tactical control radar (ADTCR) and low-level light weight radar (LLLR) and the Soviet origin radars with the missile systems. This is based on the army’s idea of protecting small and large assets by fixed systems.


The IAF has no guns and till it procures its own Close-in Weapons System (CIWS), a combination of guns and radars, the Army AD gives the IAF assets the much-needed point defence. It also has missiles from Soviet origin (SAM-2, Igla 1M and OSA-AK), Israel (SPYDER and MRSAM) and the indigenous Akash missiles. The navy also gets point defence for strategic assets from Army AD and each ship is equipped with its requirements of large, medium and small range of guns and missiles needed for its self-protection from aerial threat.

With such a wide variety of equipment located widely over areas in this vast country, it is a no brainer that the common requirement is of control and coordination of these resources against a common enemy aerial threat. However, this aspect is also diverse with the Army AD still using its semi-automatic control and reporting system as against the fully automatic and modern system called the Integrated Automatic Command and Control System (IACCS) of the IAF.

The air threat that the country is facing today is multifarious and seeks an integrated AD system that needs to work as a part of a network. The sad incident of downing of an IAF helicopter by its own SPYDER missile in 2019 only highlights this need for a common thread of control and coordination. The proliferation of air defence equipment in the tactical battel area (TBA) led to the need for precise control of the fire of these systems to overcome the danger of fratricide and also to ensure maximum utilisation of these resources.

This led to the requirement for a centralised and joint control of the systems by the IAF and the Indian Army. This in turn created the ad hoc Joint Air Defence Centres (JADC) concept at the TBAs as it remains only effective during joint exercises between the IAF and the army. The downing of a Malaysian airline over eastern Ukraine and the recent crash in Iran of a Ukrainian airline are attributed to air defence missiles fired in the fog of war situations or mistakenly fired. It only emphasises the dire need for an automated and coordinated AD Control & Reporting System (ADC&R) with centralised control. This probably has led the CDS to be given the task of putting together an ADC. How and when it would come about in India is something which is still evolving and under wraps. It is not my endeavour here to speculate and give any organisational structure or concept but it is to highlight the necessity of components which constitute an integrated AD system and why the need for integration and common training is the need of the hour.

AD today definitely needs to be more integrated and work as an Integrated AD System (IADS) than be utilised as a weapon for point to point defence. It needs to have a seamless activity of inputs from a chain of radars acting as the eyes. The communication for these inputs should be passed to a command & control centre which would analyse and prioritise the threat and pass the control orders to the appropriate weapon/weapons to take on the aerial threat.

In the future, passive AD would play an equally important role. China is learnt to have developed CETC DWL 002 emitter based on Tamara Series which gives out three-dimensional location of the emitter. It is also said to be highly mobile and difficult to locate. In conjunction with anti-stealth radars and the futuristic Quantum radars, these would be real game changers. However, this kind of IADS is far more complex. It needs to integrate different types of weapon systems (of different countries and capabilities) using a common language with the help of persons and procedures. The important aspects of this IADS would be the following:

The IADS would mean detection of targets using radars, track the feeds obtained, and identify the tracks. The BMS would have functions of threat evaluation, engagement decision, weapon selection and engagement authorisation. The entire IADS would be dependent on a robust communication system with multiple communication channels utilising the landlines, fibre optic networks, and radio frequency and electromagnetic spectrum links.

Every country has its own philosophy and not one approach is suited to an entire country and could be different for a different theatre of operation. The Russians depend on self-propelled system to cater to various air threats in a combined arms concept with weapons of various ranges and mounted on different platforms. Russians field their AD across all the Services and the differentiation of tactical and strategic weapons is as per value of the asset to be protected. The US Air Force uses range and altitude to create tactical and strategic missile systems correlating between range and role of a system.

Weapon systems like S 400 (India is soon to get five squadrons for the IAF) are game changers. These firstly cater for different threats from the same platform being equipped with missiles of various ranges; secondly, they free the air force aircraft from interceptor roles and finally, an S 400 comes along with its own BMS, weapons etc. The Russians use a Pantsir (a mix of short-range missile and gun system) along with a S 400 in an integrated concept rather than separate point defence weapons to deter massive air threats or swarms.

Indian AD should, therefore, look at the entire country being covered in an intelligent network of radars which provide early warning supported by various weapons of all the Services. These operate in a method to defeat suppression of enemy AD (SEAD) and therefore, must be mobile and possess electronic counter counter measures (ECCM). Changes in air threat due to stealth, precision attack and beyond visual range (BVR) capability forces the deployment into large area AD than key point defence. These must be complemented with mobile AD weapons systems which would plug holes in the AD coverage and also be useful in mobile and ambush roles. The IADS would then be able to provide offensive and joint AD in the newly thought about ADC. All these measures would, of course, be complemented or supported by use of frontline aircraft thus being capable of taking on multiple threats at the same time.

A new threat in the horizon which stares in the face of AD is the emergence of drones as a potent aerial threat. The drones started as Unmanned Aerial Vehicles (UAVs) and went on from reconnaissance to attack roles. The precision strike on General Qassim of the Kuds Force of Iran is one such role of these UAVs. The precision kill weapons or loitering ammunition are other roles assigned to these aerial platforms. Today, a cheap drone manufactured in the garage of a house can be used to carry an explosive which could be used by non-state and state actors. The recent reports of terrorists utilising these drones even to drop weapons in Punjab are the future utilisation of these mass-produced aerial threats.

The AD against such a threat has to be solutions which are cheap and in plenty like the science fiction movies of Star War series. These have to be based on hard kill options like laser or electromagnetic waves which can destroy or cripple these drones. Alternately, fast firing guns like BAE L-70 Mark IV with 3P ammunition in conjunction with pencil beam fire control radars could be used. An alternative is also the use of soft kill AD weapons like the CLOUD or GRIF of Ukraine. No one weapon can be utilised against such threats. It has to be a solution which has to have a combination of small range, varied spectrum capable soft and hard kill options, all entwined into an IADS located as a grid to resolve the dangerous threat from UAVs.

Hopefully, the ADC would be addressing these issues by having a single point agency to assess the requirements of AD, procure appropriate weapons and integrate the existing resources including training for maximum optimisation.