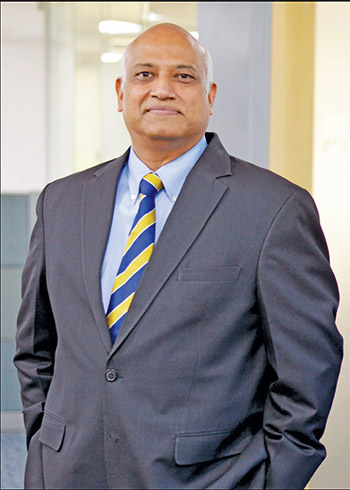 New show, new city. What are your expectations from DefExpo 2020?

This year has begun with shifting geo-political equations around the world and the region, necessitating greater preparedness on part of the countries’ military establishments. India is also witnessing continuing tensions along its borders. In all, we have a new landscape of combat emerging around the world in 2020.

DefExpo 2020 against this backdrop assumes special importance, as India continues to re-evaluate its military needs  and pursues modernisation of its warfare technologies. This is a platform for global players like us to showcase our capabilities as well as learn about the developing needs of our customers. We look forward to this year’s Def-Expo as a great forum to interact, share and take feedback from our partners and customers.

We look forward to good discussions, particularly in the naval marine segment, where we would like to showcase capabilities from both our defence business and the MTU brand. The MT30 marine gas turbine engine for naval combat vessels is a state-of-the-art product that has a proven track record of stellar performance. On the other hand, the integrated bridge system from MTU offers advanced capabilities for managing efficient ship operations.

We hope these world-class, highly reliable and efficient solutions will find interest among our Indian customers.

What new systems and technologies will you showcase at the Show?

From our Rolls-Royce Power Systems portfolio, we hope to familiarize our Indian defence customers with the MTU

Marine Automation EM 50-2 Integrated Bridge System. The modern integrated bridge forms the central point of access to all information that is crucial to safe and efficient ship operation. With the new MTU solution, information previously scattered over diverse displays is now collated at a standardised display using a single graphic interface which enables faster overview using an ultra-modern visuals concept.

By making all data available centrally, the information coming from the various sub-systems can be combined and processed using digital analysis. These findings can then be used, for example, to increase availability, reduce life-cycle costs and further enhance operational reliability.


We would also like to highlight the MTU 8V199 engine suitable for tracked and wheeled military vehicles. It is a highly compact, turbocharged and water-cooled machine which can be easily adapted to the customer demands.

The Series 199 engines have established themselves in various armoured vehicles, including the Boxer (in service with the German, Dutch and Lithuanian armed forces and ordered by Australia and Great Britain) and ASCOD family (including the Austrian ULAN , the Spanish Pizarro and the British Army’s Scout SV Armoured Fighting Vehicle).

Both Boxer and the ASCOD family are among the most advanced and successful armoured vehicles in the world.

From our defence portfolio, we will be presenting the capabilities of the Rolls-Royce MT30 engine for navy vessels. Designed for the 21st century and derived from aero Trent technology, MT30 is the world’s most power dense marine gas turbine in service today. The MT30 offers excellent power density and reliability that allows the ship to   operate anywhere in the world without loss of performance or power, with reduced through-life maintenance.

2008 marked the entry into service for the MT30 powering the US Navy’s first Littoral Combat Ship, USS Freedom, and the engine has demonstrated excellent performance in service, powering the ship to speeds in excess of 40kts. One of the key strengths of MT30 is that it has the power for today and also tomorrow. With growing demand for electrical power MT30 will meet those future demands.

This is one of the reasons that in just over a decade, the MT30 is operating or has been selected in all conceivable propulsion arrangements across seven ship types – mechanical, hybrid and integrated-electric, with power delivered to water-jets, controllable and fixed-pitch propellers, depending on application.

Rolls-Royce is firmly committed to serve the needs of the Indian Navy and is keen to customise its advanced technology products to best serve the Navy’s power needs.

Do you have plans to explore the new location of theShow, in terms of tourism?

Certainly. Lucknow is a historic city, well known as a melting pot of cultures and cuisines. A visit to Lucknow would be incomplete without sampling the delights of the city’s cultural and gastronomic attractions!