The inauguration of DefExpo2020 combined superlatives with dazzling statistics

As the audience sat in wonderment, two ladies presented Prime Minister Narendra Modi with a tablet. He pressed a button on it and the giant stage lit up. A man dressed in some sort of a mufti appeared doing a kind of dance move – closer to basic acrobatics than dance really, as words – Elements That Connect Us – lit up the stage. For the next few minutes, as the perplexing dance continued, the screen filled with words like Fire, Earth, Cy­berspace, Water… This was followed by another sequence listing path-breaking innovations like Aadhaar, Bhim, A-Sat, BRAHMOS, helicopters, LCA etc. Called invocation, this routine set the tone for the rest of the ceremony, that was more fanciful than illuminating. 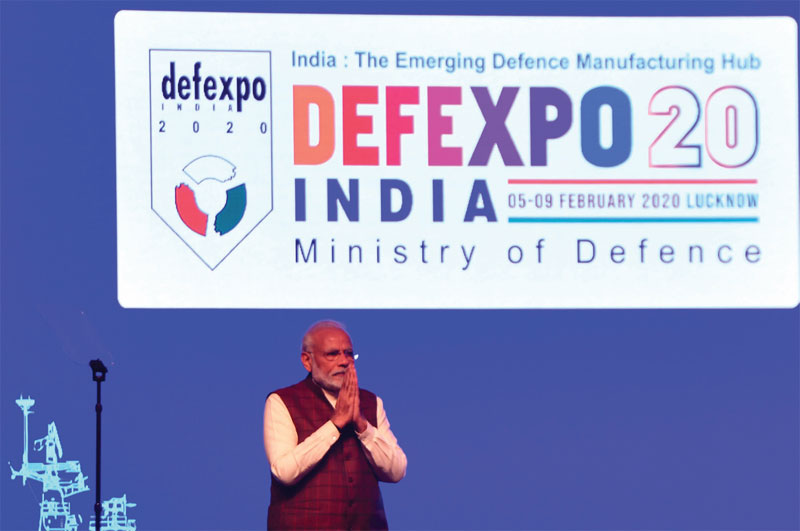 So, here’s the thing. Since nothing about the Indian Prime Minister Naren­dra Modi is small, nothing that he choos­es to associate himself with can be small either. The evidence on the ground be damned. Hence, not only ‘DefExpo2020 is the biggest edition of the show so far, it has also become one of the biggest “DefExpos” in the world.’ Never mind that DefExpo is an Indian show.

In the similar vein, not only is India already among the leading defence ex­porting countries of the world, in the next five years it will be among the top defence exporters because, we are ‘not only creating state of the art systems and technologies for our needs, we are exporting it too.’

At the inauguration of DefExpo, Prime Minister Narendra Modi employed su­perlatives with statistics to weave a magical web in which India and Indian defence industry was the cynosure of everyone’s attention – a place unparal­leled, where the world was converging for its own sake. This was evident from the ‘unprecedented global participation’ at DefExpo2020. “Reflects the world’s confidence in India,” he said succinctly.

Speaking in Hindi with a smattering of select English words like ‘Artificial Intel­ligence’, ‘Augmented Reality’, ‘Internet of things’, ‘defence manufacturing hub’, ‘3-D Printing’, ‘Data Analytics’, he told the audience comprising his ministerial colleagues, defence ministers of several African countries, representatives from global defence industry and select me­dia that how despite being a powerful defence manufacturing hub for hun­dreds of years, India’s policies post-In­dependence made it dependent upon defence imports.

‘How can a country rise if it is depen­dent on defence exports?” he asked his audience rhetorically.

To overcome this shortcoming, his government crafted the policy of ‘Make in India – for India and for the world.’ Towards this end, in five years, his gov­ernment has doubled the number of licenses issued for defence manufactur­ing, from 217 in 2014 to 460 now. What’s more, his government envisages taking the volume of defence exports to USD 5 billion in the next five years.


“We have created the roadmap,” he announced. “We are launching several prototypes today. The aim is to develop at least five new AI-driven products in the next five years.”

However, the prime minister — fre­quently referred to as dynamic, vision­ary, world famous, beloved, inspiring – by those who spoke before him, said that his vision cannot be realised until private sector has equal participation in defence manufacturing. To facilitate this even further, Indian industrialists can now avail of transfer of technology from the DRDO. What’s more, they can use DRDO patents for free.

“The country is moving forward,” he said. “Make in India will not only strengthen India’s defence but also cre­ate jobs.”

Prime minister’s grandiose vision was shared by his defence minister Ra­jnath Singh, who speaking before him said that his government’s strategy for defence manufacturing hinges on 3Ps – policy, production and partnership. In this, the policy includes creation of a single window clearances for defence businesses, construction of defence corridors, the thrust on Make in India, Start-up India and Skill India.

The production part of the strategy in­cludes efforts toward becoming net ex­porter of defence goods from being the net importer. “We are already exporting equipment worth Rs 10,000 crore,” de­fence minister Rajnath Singh said. As far as partnership is concerned, he said that the government was conscious of the fact that cooperation was very import­ant for defence manufacturing. Hence, his ministry’s effort has been to trans­form India’s buyer-seller equation into partnership. “India is now a part of the global supply chain. 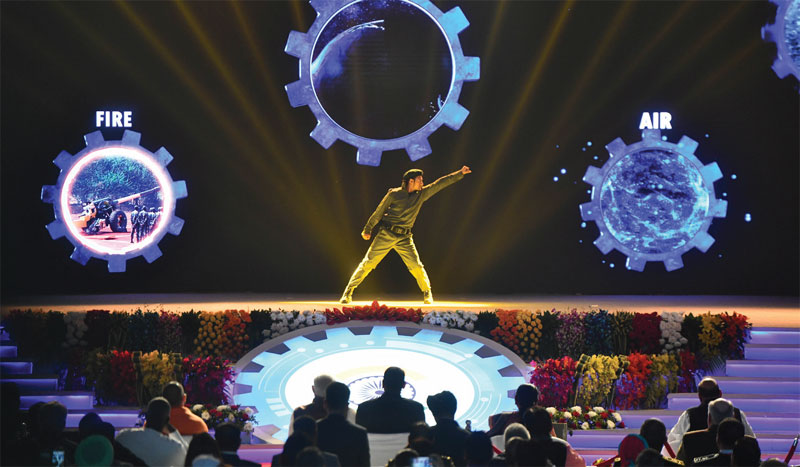 Singh said that by combining techno­logical innovation with defence equip­ment manufacturing, India has been able to successfully leverage its capabil­ities. And is poised to realise the vision of the prime minister to make India a powerhouse of defence manufacturing.

Earlier in his welcome address, Singh called DefExpo the biggest show in 10 years. What’s more, he added, it is a very different show from the previous edi­tions.

In nearly an hourlong inaugural cer­emony, in which several leaders were caught napping on the giant screen, this was the single most profound statement of the afternoon. DefExpo2020 is very different from all the previous shows for four reasons.

One, it is much smaller show. There is a sharp gap between the foreign and the In­dian participants. In fact, to make up the numbers, space has been given to vendors selling food preserves like jams, pickles and chavanprash in the hall dedicated to showcase industry from Uttar Pradesh.

Two, there is absence of interest. No press conferences are being held during the show, neither by the defence minis­ter nor by the DRDO chief or any other senior government functionary. As far as OEMs are concerned, they are happy hopping from one seminar/ conference to another. And those who are engaging with the media are repeating the oft-re­peated messages. After all, when there are no programmes in the offing, what is there to talk.

Three, there is lack of optimism in the Indian potential. And this is reflected in the money exhibitors are spending on the show. Not only is there fewer advertising in the trade publications, exhibitors have refrained from public advertising as well. All that one sees as a sign of a big show in Lucknow are hoardings by ministry of de­fence, department of defence production and the UP government.

And four, this has been the most po­litically-driven show, where trade may or may not happen. The focus of the organ­isers has been on presenting an image of India to the Indians, not the world. Right from the publicity banners in the cities to the inaugural ceremony, everything screams, ‘Indians look at India, aren’t we the best!’