The recent delivery of the 30th KC-46A Pegasus aircraft to the US Air Force (USAF) is a testament and success of the air-refueling platform by Boeing which is enabling the USAF to provide in-flight refueling services to bombers, fighters, airlifters, surveillance aircraft, and other aircrafts flown by the US military. 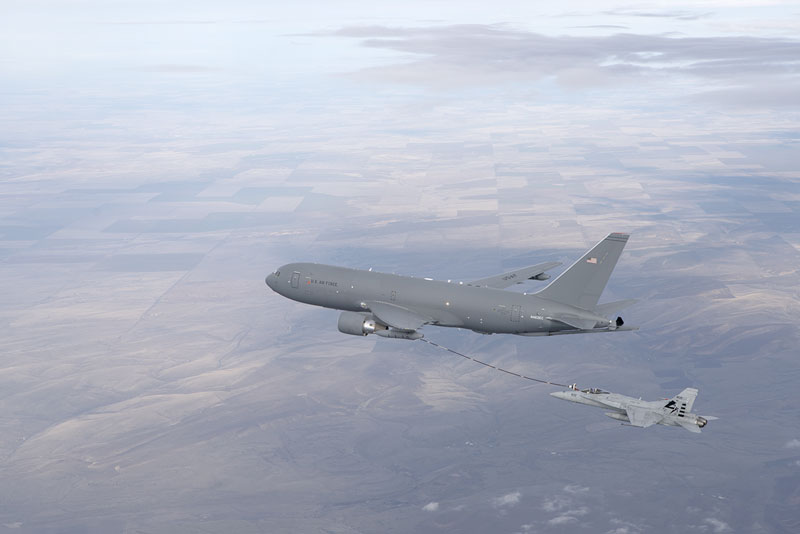 With the KC-46A Pegasus, a new era of aerial refueling and mobility capabilities has dawned and Boeing plans to build 179 of the 767-based refueling aircraft for the air force to replace its legacy tanker fleet.

Boeing is on contract for 71 tankers for the USAF and has 50+ aircraft in assembly, build or test. The KC-46 is going through a comprehensive testing schedule to ensure that each system and sub-system is performing as expected. The Pegasus is undergoing rigorous testing throughout all aspects of the refueling envelope and in all conditions, including day, night and covert.

Recently, the USAF certified the KC-46A’s transition into Initial Operational Test and Evaluation (IOT&E), which marks the next step in fielding the multi-role tanker.

During IOT&E, the air force will evaluate the KC-46A’s systems in numerous operational scenarios, a requirement prior to the aircraft being used operationally in combat.

In addition to the official start of IOT&E testing, KC-46A test aircraft at Edwards Air Force Base in California recently completed receiver certification with the F-22 Raptor and RC-135 Rivet Joint aircraft to increase the pool of certified receiver aircraft. Receiver certification testing continues in the coming weeks with the B-2 and B-1 bomber aircraft, among others.

The KC-46 has the lowest life-cycle costs of any of its current competitors in the market, making it the most efficient and effective tanker available today.

The aircraft can be rapidly reconfigured in two man-hours for any mission – carrying passengers, cargo, aeromedical or any combination of the three, while still performing its main air refueling role. With its unique main cargo deck door, the KC-46 has 7,800+ square feet of cargo space to accommodate up to 18 full-size 463L pallets, which is more than any other tanker aircraft. It also has a fully integrated capability that enables crews to perform aeromedical evacuation on any flight.

The KC-46 is delivered with a robust suite of defensive systems and self-protective measures. It is electromagnetic pulse-hardened for missions in a nuclear environment for the high-end fight as well as incorporates flight-deck armour for protection against small arms. Additionally, the KC-46 is equipped with chemical-biological protective systems. All of these systems are incorporated into the aircraft as it is being produced, not as a retrofitted modification. The KC-46 also has the ability to launch from a ‘ready state’ within 10 minutes and coupled with its threat awareness and avoidance system, allows the Pegasus to truly fuel the fight.

It can refuel both hose-and-drogue as well as boom receptacle receiver aircraft on any sortie. It utilises 21st century centreline and wing-mounted hose and drogue systems as well as an advanced sixth-generation fly-by-wire boom. Simultaneous air refueling of two fighter aircraft is supported through wing air refueling pods (WARPS). All of these systems are built to international refueling standards. That means the KC-46 can refuel the IAF fleet now, on day one. From refueling India’s front-line fighter force to direct support of its C-17 fleet, the KC-46 enables allied and coalition refueling of all fixed-wing receiver aircraft anytime, on every mission, including simultaneous multi-point refueling.

With the Indian Air Force (IAF) intending to convert itself into an expeditionary force, the air refueler is believed to be a necessity in the coming years. The IAF has already taken decisions to increase its operational reach by deciding to enable all its aircraft and helicopters for combat and support role for mid-air refueling.

The most reliable and economical tanker to operate, the KC-46 will provide India with the combat capability it needs for sovereign operations and will also serve as an aircraft to move men and material. Pegasus is the best choice for today and the decades to come.