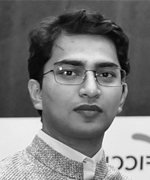 India is a maritime nation. Geographically, it owns an EEZ of 2.02 million sqkm dotted with over 1,300 islands, has seabed rights over 75,000 sqkm, a coastline of 7,516 km and 14,500 km of inland waterways. From a political economy perspective, 77 districts across nine coastal states and four coastal Union Territories are home to 18 per cent of India’s population. From a commerce perspective the maritime sector accounts for 95 per cent of India’s trade by volume and 77 per cent by value. Its maritime infrastructure assets include 12 major and 187 non-major ports. Our oceans and water bodies produce about 12 million metric tonnes of fish every year and hold 46 per cent and 61 per cent of recoverable reserves of crude oil and natural gas respectively.

Geopolitically, India is a key player in the Indian Ocean Region (IOR) which is home to about 33 per cent of the world’s population across 38 sovereign states. India also has research territories and outposts in the Arctic and the Antarctic and has made sizeable investments for hydrocarbon exploration in various countries. In the wider Indo-Pacific region, India is on every high table of international associations and groupings where trade, commerce and maritime affairs are always on the agenda.


However, when evaluated against global indicators India’s record as a maritime nation is not encouraging. India ranks as the 16th largest maritime nation. With a share of about 3.2 per cent of global GDP and about 4.5 per cent of global EXIM trade our shipping and shipbuilding credentials do not yet make the mark. On a positive note, we have plenty of headspace to grow. Clearly, the current situation must be recalibrated to be aligned with India’s target of becoming a USD five trillion economy.

History informs us that every great power possessed a vibrant shipbuilding industry and operated best in class ships that helped maintain a continued and unimpeded access to resources, commodities and markets which are the vital pillars of a nation’s economy. A vibrant shipbuilding industry contributes significantly to the economy and security of a nation as it directly impacts national GDP, generates demand in various upstream industries such as steel, aluminium, electrical machinery and equipment etc., and downstream sectors such as infrastructure and marine services. The multiplier for job creation is upward of 36-50 times the shipyard strength. These domestically built ships, in their voyages are a living testimony to a nation’s industrial capability and might.

Yet, only seven per cent of Indian export-import (EXIM) cargo is carried on Indian ships. India’s mercantile fleet amounts to only 0.1 per cent of the global fleet. Further, India is forced to relax cabotage as indigenous capacity to carry the potential cargo of more than 300 MMTPA coastal cargo is very limited. As a result, India pays out about USD50-60 billion for imports on foreign hulls.

Whilst India has developed a national capability to design and build nuclear submarines and aircraft carriers unfortunately it does not yet design or build Car Carriers, VLCC Products and Crude carriers, Container ships, LNG ships, Dredgers, Deep Sea Fishing Vessels, Oceanographic vessels and modern riverine transports which are vital for the balanced growth of the economy and national security. A long-term streamlined approach to procurement and maintenance of 45 ships would have been transformative for the Indian shipbuilding industry.

The Indian Navy worked its acquisition plan around a long-term well-articulated shipbuilding strategy and thus nurtured and built a national capability in construction of warships over the years. The principal strategy developed comprised a triumvirate where the user (Indian Navy), the buyer (ministry of defence) and the builder (public sector shipyards) were all government. The strategy paid off and Indian shipyards today are not only building all naval ships but have also achieved success in the export of ships. A snapshot of the Indian Navy induction plan over the period 1997-2018 is placed below. Out of 103 ships, 93 were ordered on Indian shipyards. These include everything from Patrol boats to Carriers! 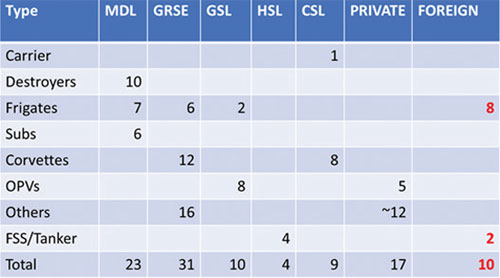 The shipbuilding industry has immense potential for a rapidly growing economy targeting a GDP of USD five trillion by 2025 provided it receives greater support from the various user ministries and departments of the government, is recognised as a national necessity and is elevated to a strategic industry.

Shipping and shipbuilding is required to be conjoined so that both sectors are developed holistically and synergistically as there are common and competing interests, opportunities and challenges. A strategic 30-year National Shipbuilding and Shipping Strategy needs to be drafted to energise this sector. This should include a long-term national programme on building of VLCC, LNG Carriers, Car Carriers and Container Ships as a strategic necessity even at some economic costs. Such a strategy must adopt a Pipeline Ship Production Model for standard ships and replicate the highly successful Liberty Ship Production Model rather than the ‘batch production’ of a few ships at a time. Pipeline production will ensure that the supply chain is also energised together with core shipbuilding.

Replace End of Life Ships and Crafts: Ships, crafts and vessels, who have failed to obtain a certificate of seaworthiness should be paid off. Strict pollution criteria must be enforced on existing vintage ships. By operationalising and enforcing these two provisions, industry estimates are that 128 cargo ships amounting to about 616,000 gross tonnes are due to be ‘laid off’ as shown in the table below. The replacement orders for these ships should only be placed on Indian shipbuilding industry. With India’s ascension to the Hong Kong Convention and the passing of the Recycling of Ships Act, 2019 these ships should also be encouraged to be recycled in India. Therefore, such a scheme would benefit multiple industries in one go in the sector.

In the case of service ships, as per industry estimates, there are an estimated 387 ships amounting to about 3,54,000 GT, which are also by age and condition, fit to be laid off. The replacement of these ships would create business worth an estimated Rs 11,000 crores over a five-seven year horizon. It would also introduce the latest in shipbuilding technology, MARPOL compliant ships, and generate the scale and size required to create a vibrant supply chain.

Sunset Clause on Cabotage: Cabotage must be capped with a clear sunset clause so that all goods shipped between Indian Ports are to be transported on ships that are built, owned, and operated by Indian citizens or permanent residents. Proposed sunset for Cabotage may be 31 December 2025 to enable Indian or foreign shipping companies to procure Indian Built Ships for coastal trade. This would also boost the shipbuilding industry but also the upstream industries of steel, aluminium, machinery etc.

Incentivise Coastal Cargo Traffic: The aspiration should be to increase coastal trade — for its obvious economic, environmental, social and technological benefits — to about 12 per cent of the total national cargo traffic in 10 years. This would generate cargo shipping requirements to the tune of 300-450 million metric tonnes per annum on the short sea shipping route.

Converting the cargo into ship build requirements the above table predicts that a requirement for 524 ships worth about Rs 56,412 crore over a five-seven year time horizon exists. The ships would be a mix of the 10,000 DWT and 26,000 DWT for commodities and a few 50,000 DWT ships for ores.

Combining the replacement and new build market provides an excellent opportunity for India to leverage its requirements for multi modal low cost logistics to achieve its aspiration of reaching the USD 5 trillion mark, improving its manufacturing content in GDP, energising the shipbuilding industry with state of the art technologies and creating a vibrant long term supply chain capable of addressing both domestic and global markets. It would also reduce the load on the Road and Rail logistics network.

Further, if the government makes the strategic decision to build its own fleet of LNG carriers, car carriers and container ships, India can leapfrog to be amongst the foremost shipbuilding countries of the world. During industry discussions several shipbuilders from the world have reached out for shifting production to India and bring in the technology. This initiative will also drive the FDI mechanism and create a larger market for Indian built ships. On the downside, India may have to pay a higher price for building in India compared to direct imports but when seen as a holistic national investment that will create national capability, capacity and skills it is evident that strategic requirements must override pure economic considerations.

Reservation for SME shipyards: For construction of tugs, dredgers, barges, crafts, inland transportation vessels, preference should be given to SME shipyards. Similarly, yard craft, certain warships and Coast Guard vessels, as may be decided by the ministry of defence, should also be reserved for SME shipyards. All interceptor craft requirements of the Central Armed Police Forces (CAPFs) and customs should only be built in SME shipyards. This will revive the smaller shipyards and distributing these projects would also ensure faster delivery and quality ships.

This model will only work if there is buy in from all government stakeholders in the sector, and hence must be driven by the Prime Minister Office (PMO) to integrate, coordinate and harmonise the programs and plans of the various sub-sectors of the industry to avoid duplication, resolve conflicts, optimise investments, synergise efforts and resources to the common purpose of nation building through shipbuilding.

Combining the replacement and new build market provides an excellent opportunity for India to leverage its requirements for multi-modal low cost logistics to achieve its aspiration of reaching the USD5 trillion mark, improving its manufacturing content in GDP, energising the shipbuilding industry with state-of-the-art technologies and creating a vibrant supply chain that can also serve the global market.

Given that there is national design capability to build highly complex vessels such as aircraft carriers and nuclear submarines, designing and building these ships is a challenge that Indian ship designers can be tasked to achieve. This initiative will also drive the foreign direct investment (FDI) mechanism and create a larger market for Indian built ships.

As former Chief of the Naval Staff Admiral Robin Dhowan said, “For more than 50 years, our Indian naval designers have been designing and our indigenous shipyards have been building ships for the navy, resulting in our transition from a ‘Buyer’s Navy’ to a ‘Builder’s Navy’. The blueprint of the future Indian Navy is firmly anchored on self-reliance and indigenisation and today it is a matter of great pride that nearly 50 ships and submarines under construction for the Indian Navy are being built in Indian shipyards, both public and private. This is one of the finest examples of ‘Make in India’. This shipbuilding capability of India needs to be extended to commercial shipbuilding sector as well and the potential of all our 28 shipyards optimally exploited. To achieve this objective, we need to draw up a long-term national shipbuilding plan, as shipbuilding and related maritime sectors could play a vital role in the nation’s economic growth. India’s shipbuilding potential needs to be exploited to build ships of the future in accordance with the energy efficiency design index and propelled on environment friendly fuel.”