The Indian Army is accelerating its efforts to catch-up with global militaries in Unmanned Ground Vehicles (UGV). It would appear that the rapid pace of progress with UGVs has largely passed the army by and it is now accelerating efforts to ensure that it is not left behind in a technology race.

Unmanned systems could deliver significant benefits. However, the DRDO which is tasked with undertaking cutting-edge defence research has proved unequal to the task of delivering the armed forces with UGVs of operational utility. This has resulted in an unmatched opportunity for Indian private sector defence industry and start-ups to deliver on the army’s requirements for unmanned systems.

The army is already seized of the imperative of inducting UGVs into service and ‘UGV Experiment-2021’, an interaction organised by the Army Design Bureau (ADB) with firms developing such systems in December last year can be considered as a landmark event and highlighted the army’s strong intent to induct autonomous military vehicle technology. The event was held at the Babina Field Firing Ranges December 9-13 and brought both the user and developers together on a single platforms to allow an exchange of ideas with the industry.

More than two dozen Indian firms showcased 35 UGVs of varying sizes and capabilities in systems for surveillance, tactical receive, intelligence, kinetic effect, and evacuation. This allowed army personnel present to gauge their effectiveness and suitability for military use. Amongst some of the UGVs for which the army has a requirement is one that can carry a load of 250-500kg and operate for a duration of 12 hours. In another significant achievement announced in late January, Tata Advanced Systems Limited (TASL) announced that it had conducted successful trials in Ladakh with its Wheeled Armoured Platform 8X8 (WhAP), which is an indigenously developed amphibious wheeled Infantry Combat Vehicle (Wheeled). The development of military vehicles of such capability (albeit manned) also augurs well for the development of smaller UGVs in the years to come.

Amongst the UGVs showcased to the army in December was the Enhanced Collaborative Autonomous Rover System (ECARS) which is available in 4X4 and 6X6 configurations.  Developed by the Kalyani Group, the ECARS 6X6 is a multi-terrain vehicle and has a plethora of sensors for positioning, mapping, path planning & obstacle detection, allowing operation on all types of terrain. It can perform surveillance, security, safety and rescue missions and operate in temperatures ranging from -20 degree C to +50 degree C.

Growing Indian innovation is also on display with young start-ups such as Tamil Nadu based Torus Robotics which is working on UGVs, robotics and indigenous & disruptive power-train technologies. The company has already received recognition from Start-up India (DIPP 51485) and inked an MOU with Bharat Earth Movers Limited (BEML) at Aero India 2021 for development of Artificial Intelligence (AI) based UGVs.

The Chennai based company has designed, developed and delivered a fully electric, one tonne UGV, fitted with a six Degrees of Freedom (DOF) robotic arm for detection, identification and disposal of explosive ordnance and Improvised Explosive Devices (IED). The vehicle can be operated by its controller from a distance of one km and can also be used to explore hazardous areas. It can also be used to carry heavy loads at high altitudes. The company got in touch with the Army Design Bureau (ADB) towards the end of 2018 to understand the requirement for this type of UGV. Development of a prototype began in 2019 and was ready before the end of the year. With the support of the army and DRDO, Torus partnered with BEML to develop the AI based 750kg UGV. It will be used to carry heavy equipment at high altitudes and production could commence as early as 2023.

Another Chennai based start-up, Combat Robotics, is developing the Arista Unmanned Ground Vehicle (UGV), which it terms as the world’s first chassis-less UGV. The innovative platform features an integrated motor drive and a modular design which makes it portable and easily deployable. The Arista UGV offers high manoeuvrability in varied terrain and has a three hour endurance. Combat Robotics is also well advanced in the development of a smart spherical robot which has been selected for further development by the army.

The 2.5 year old company is developing ‘TOTA’ which is a smart technical throwable robot featuring AI-based vision with a thermal feed and two-way communication. It can be used as a surveillance and reconnaissance tool to help plan high-risk missions or even aid in searching and rescuing individuals in confined spaces. Combat Robotics is being supported by the Indian Army’s College of Military Engineering and trials are also slated to take place at Pulwama. The company is now developing a real-time data transfer system, which can stream videos at low latency and is at a prototype stage.

CVRDE has scaled up to the development of a tele-operated modified BMP Nag Missile carrier (NAMICA) and subsequently took up the technology demonstrator project ‘Conversion of BMP into Tele-operated and Autonomous vehicle’, later named as Mission Unmanned Tracked (MUNTRA). CVRDE states that it has completed development of the MUNTRA series of tracked UGVs with three vehicles being completed and configured for Surveillance, NBC Reconnaissance and Mine Detection and Marking. The UGVs have successfully completed rigorous validation trials conducted in summer/ winter conditions at the Mahajan Field Firing Ranges (MFFR), Rajasthan, few years ago. 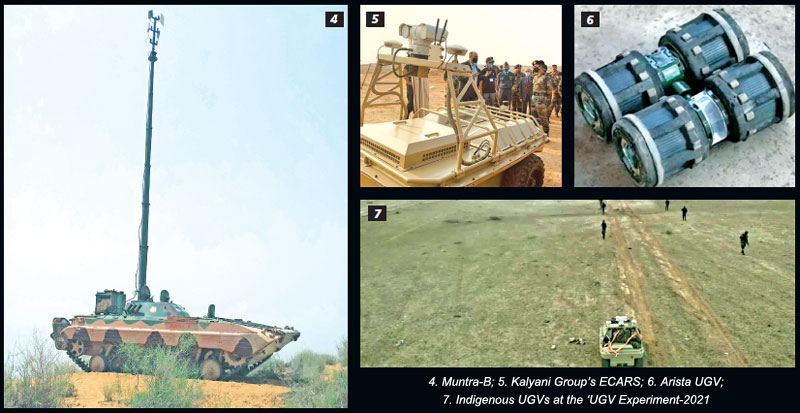 VRDE, Ahmednagar has developed the CBRN Mini UGB which can traverse through confined areas and is a tracked platform with four flippers. It was designed to facilitate CBRN detection, digital marking of contaminated zones and soil/liquid sample collection using a robotic arm, thereby reducing the risk of exposing personnel. This Mini-UGV has stair climbing, water fording and ditch crossing capabilities. The hand-held operator control unit facilitates tele-operation of driving & payload operations using wireless communication link. It has an endurance of two hours and a wireless communication range of 500m in near Line of Sight (LoS) mode and 1,000m in LoS mode.