With several projects in the pipeline with both Russia and Ukraine, the Indian military is feeling the pinch

When Russia attacked Ukraine and a full-fledged conflict between the two countries began, the reverberations were deeply felt in India. Nearly a month later, two major events had to be ‘postponed’. The Defence Exposition (DefExpo) that was to be held in Gandhinagar, Gujarat, in March was postponed just days before its inauguration citing ‘logistical problems with participants’. Neither Russia nor Ukraine were mentioned.

Two days later, the Indian Air Force’s Exercise Vayu Shakti that was to happen at the Pokhran range in Rajasthan the same month, was also cancelled on short notice. No reasons were given. Sources however said that the exercise was cancelled in order to preserve the equipment and conserve the ammunition that the IAF currently holds as the supply chain from both Russia and Ukraine would remain disrupted for a long time. Of course, the US and its allies-imposed sanctions against Russia also loomed.

Ahead of the Vayu Shakti event, during a press conference by Vice Chief of Air Staff (VCAS) Air Marshal Sandeep Singh maintained that the sanctions would not hamper India severely. But since the situation is still unfolding, he added, “We are evaluating. There will be certain difficulties. That’s about all. It won’t affect us significantly.” In case of spares from Russia he acknowledged that even though India has gone through similar issues earlier, this will be a little more serious. “It will not affect us critically but in the case of spares, there will be difficulties initially, no doubt,” he said.

In a world as globalised as this, calamities that strike one part of the world are bound to have an effect on other parts directly or indirectly. India’s long standing cooperation with the USSR and then with Russia mainly in the defence sector will evidently impact India in more ways than one. Knowingly, India abstained on every resolution introduced with regard to Ukraine at the United Nations.

India has formed an inter-ministerial panel to scrutinise economic sanctions imposed by the West on Russia and the impact it may have on the country’s economy. Led by economic affairs secretary Ajay Seth, the high-level panel also includes top bureaucrats of the ministries of food and consumer affairs, fertilisers, commerce, external affairs, agriculture and petroleum. This was an important step to take for India because the Rupee has been going through upheavals since the time the war began. In the first week of March, the rupee declined 81 paise to 76.98 against the US dollar in opening trade.

According to a Stockholm International Peace and Research Institute (SIPRI) report released this year, Russia is still tops Indian arms purchases. As per the report, in the period between 2017-2021 Russia was India’s largest supplier of arms, accounting 46 per cent of India’s imports.

‘The overall drop in Russian arms exports between 2012-16 and 2017-21 was almost entirely due to decreases in arms exports to India (-47 per cent) and Vietnam (-71 per cent),’ it mentioned. Russia’s share of arms imports to India fell from 69 per cent in 2012-17 to 46 per cent in 2017-21. However, despite this, there is a long way to go for India to cut its dependence on Russia, if it wishes to, because, according to Stimson Centre, currently, 85 per cent of India’s military arsenal is of Russian origin and India continues to rely upon Russia for maintenance, spare parts, and other support for its existing arsenal. The SIPRI report, giving an overview of India’s current projects stated that while a number of arms export contracts signed over the past 10 years had been completed by the end of 2021, several large Russian arms deliveries to India are still pending and include eight air defence systems, four frigates and one nuclear-powered submarine .

For India, Russia remains a key partner when it comes to importing state-of-the-art weapon systems for the simple reason that only Russia has been willing to offer India its latest cutting-edge technology. In fact, SIPRI data shows that Russia has been India’s most preferred source for defence purchases since the 2000s. So much so that, India’s sole aircraft carrier, INS Vikramaditya that was commissioned in 2013 was bought from Russia. A number of critical technologies such as the S-400 air and missile defence system, naval nuclear propulsion are some of the deliveries India awaits from Russia.

Regarding India’s dependence on Russia, AVM Manmohan Bahadur (retd) said, “We can expect delays in supply of spares and armament as the Russians would be replenishing their stocks and losses in the war. This implies that we should conserve equipment  and spares till the situation stabilises.” 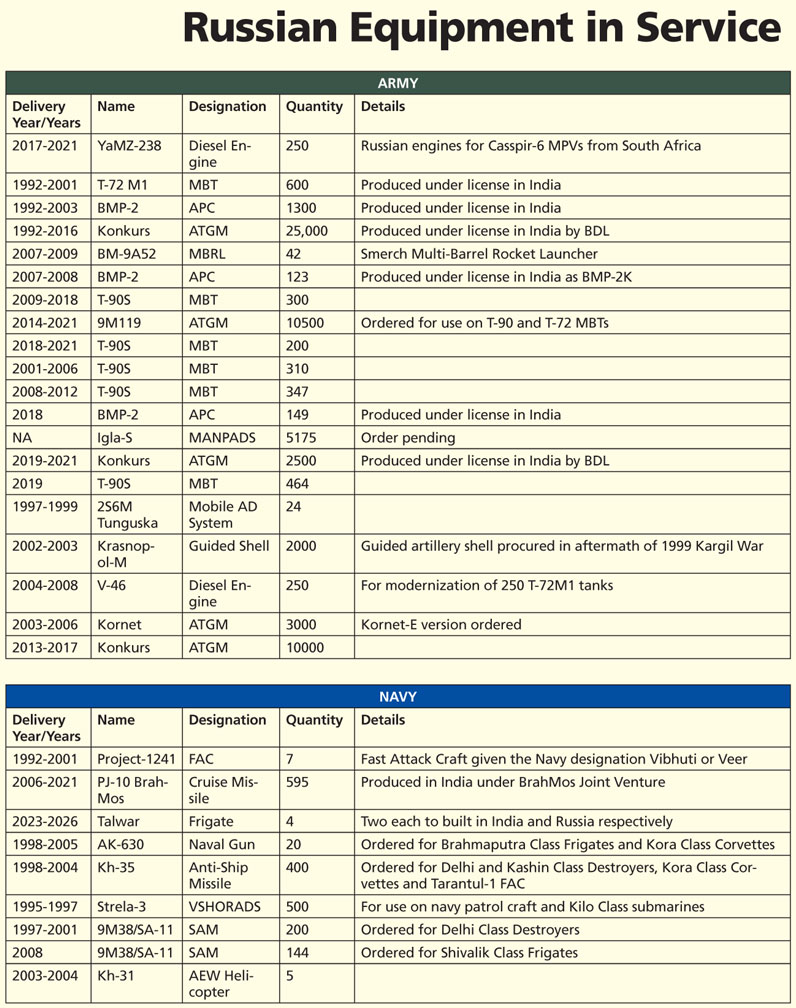 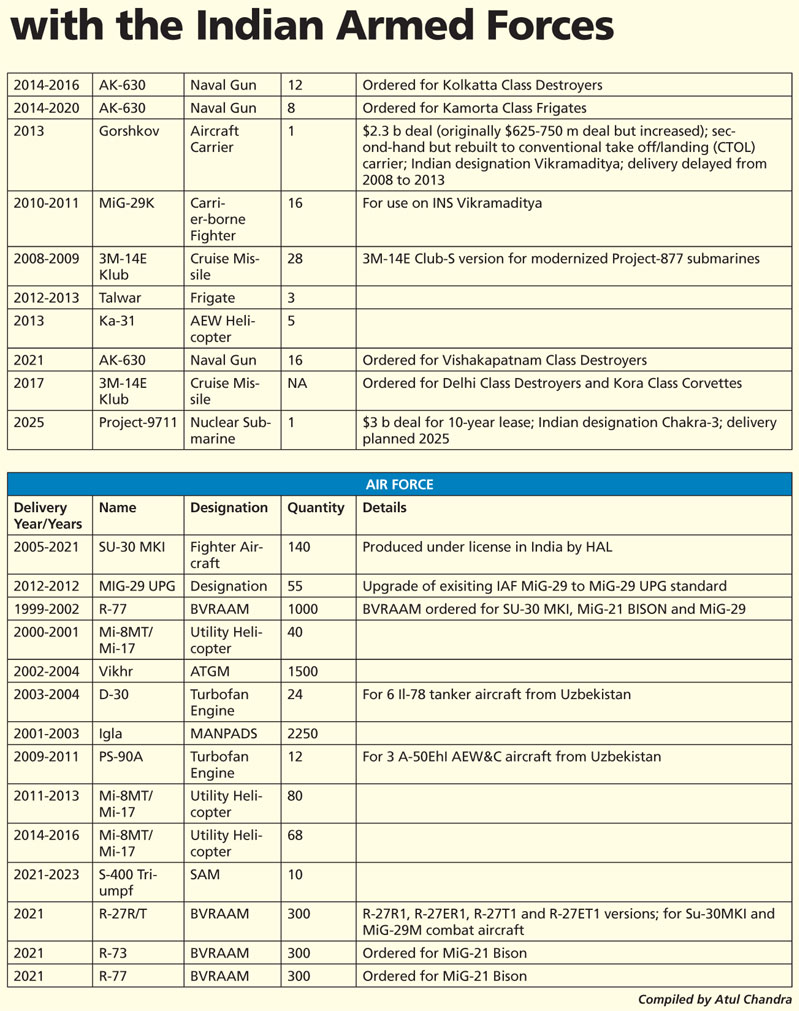 The Impact of War

While India imports major weapon systems from Russia, there are several spare parts that India continues to buy from Ukraine, as, after the USSR disintegrated, the manufacturing of some of the Russian equipment remained in Ukraine. The IAF and the Navy rely on Ukraine for spare parts. Between 2016-2020, India’s defence exports accounted for 0.5 percent from Ukraine. As a matter of fact, the ongoing situation in Ukraine which has badly damaged Ukrainian cities and towns, will have an impact here, in India.

The IAF operates 100 An-32 aircraft that are manufactured by Antonov in Ukraine. At the press conference, VCAS Air Marshal Singh, while addressing this concern said that this was not the first time that a situation like this has arisen and that after Crimea when Ukraine was pressured, the IAF indigenised a lot of products that required an upgrade. “There is progress when it comes to AN-32. It is nearing completion. It got delayed because the items that were being imported from there for up-gradation had to be indigenised,” he said.