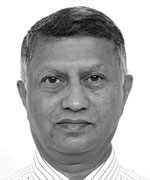 Within the quantity and quality of equipment provided to it, the Indian Air Force continues to perform all tasks given to it with great aplomb. Its field units have some of the most capable and motivated personnel anywhere in the world. It is for the higher defence management to seriously introspect over whether the wherewithal planned to be provided to the Indian armed forces generally and the IAF specifically, will really meet the requirements of deterrence in the evolving geopolitical situation.

In spite of all the bluster one reads about and hears, it is a no brainer to realise that India is far from being a match to China in terms of its capability to project credible deterrence. While India may be able to hold its own and even come out better in small border skirmishes, an all-domain total war with China will have grave consequences for India. Deterrence only works if the adversary believes that one has the resources, capabilities and the will to fight and win.

Overdependence on diplomacy without being backed by military strength, could cost India dearly in case the northern adversary decided to adopt hawk-type behaviour. In order to bolster its military strength, the identified gaps in the IAF’s fixed wing offensive capability need serious debate.

The IAF, therefore, has rightly made the Advanced Medium Combat Aircraft (AMCA) programme, its number one priority. The problem, however, is in the way it is supposed to be brought to fruition—a possible repetition of the Tejas saga. Keeping in mind the pace at which technology is advancing, such time frames would be unaffordable on any parameter. Ideal path would have been to run a R&D competition between the government/ public sector and, Indian private sector with a foreign partner; similar to what the Innovation for Defence Excellence (IDEX) organisation does for small ticket items.

Unfortunately, such courage is seen to be lacking as the Defence Acquisition Procedure 2020 does not provide for such R&D competition in fighter aircraft programmes. Second option is to bring in a competent partner with a financial stake in the programme. The aim of such partnership must be to essentially induct technology including Model Based Systems Engineering (MBSE) to optimise design & development (D&D); manufacturing and sustainment methods; adoption of agile software development techniques to enable ease of hardware and software upgrades; and to bring in open mission system architecture that would enable application software upgrades even on the fly.

MBSE is a key element of Industry 4.0 which even the Prime Minister has been talking about. Our aircraft manufacturing facilities are far from being Industry 4.0 compliant. The fastest way for Indian aviation industry to be forced to change over to Industry 4.0 is to open a new factory with the business process reengineered. Reengineering is beginning again with a clean sheet. It is about rejecting conventional wisdom and received assumptions of the past. It is about inventing new approaches to process structures that bear little or no resemblance to those of the 20th century. Otherwise, all we are doing is embedding outdated processes in hardware and software. We are not using the power of modern information technology to radically redesign our business processes in order to achieve dramatic improvements. An entirely new facility would also provide an opportunity to start with new HR policies that will be required for use in an industry 4.0 facility because of aspects like skill requirements and willingness to work as cobots, for example.

With the help of a partner, AMCA could be built to be optionally manned; to be specifically configured either as a weapons carrier or as a sensor platform; to operate unmanned wingmen with different capabilities; or, to operate as an airborne command and control post. Ability to employ hypersonic weapons and directed energy weapons could be built into the concept. As an alternative to partnership, mere consultancy is of little use as the management is not bound to act on observations made by the consultant.

It has been found that stealthy airframes are expensive to build and maintain. While some numbers are essential as brought out before, airframes that are not so stealthy would also be required. It is understood from press reports that a single engine 16.5 T Medium Weight Fighter (MWF) is also being developed under the Light Combat Aircraft (LCA) Mark 2 programme.

If the MWF is just a variant of the LCA, it will come up short of next generation requirements. Next generation aircraft would be expected to employ long range weapons and hypersonic weapons, both of which are expected to be large. They would be expected to have adequate spare power for many critical high power consuming applications including Directed Energy (DE) weapons. This would require much larger aircraft which in turn would essentially need two engines. Two engines would require more fuel. So, a ballpark figure would be a 24 T aircraft including about 6,000kg of internal fuel. While a single engine aircraft may have a better Instantaneous Turn Rate, a twin-engine aircraft would be expected to have better Sustained Turn Rates, capacity to sustain higher ‘g’ forces and most significantly, more Specific Excess Power that would be necessary to carry large payloads. Moreover, every next generation fighter platform, be it American, British, European, Turkish, Chinese, South Korean or Japanese; all are projected to be twin engine platforms.

If a twin-engine core is built, it could be wrapped around with an airframe suitable for AMCA, another for a not so stealthy fighter for the IAF and a third one suitable for the Indian Navy’s Twin Engine Deck Based Fighter (TEDBF). Savings in cost, time and effort would be enormous. The single engine MWF programme needs to be repurposed.

The second capability gap, according to me, is the lack of stealthy long-range bombers. The massive Tibet Autonomous Region (TAR) has to be crossed before we can target what can be called centre of gravity targets in mainland China. Such targets are 1,500 to 2,000 kilometres away. None of our present aircraft have such radius of action.

Even if one were to consider Air Launched Cruise Missiles (ALCM), such missiles would need to have a range of more than 1,000km and such weapons can only be carried by bomber class of aircraft. Use of surface-to-surface missiles (SSM) would be prohibitively expensive and their effectiveness with conventional warheads would be insignificant. In contrast, multiples, in terms of weight, attack, greater accuracy and reusability would be possible with long range stealth bombers, at a fraction of the cost of SSM. Planners would do well to consider acquiring a couple of squadrons.

In the meantime, meaningful conventional strategic air campaigns against China would not be possible and offensive counter air operations would be restricted to, airfields and airfield infrastructure in Tibet, and enemy aircraft operating from these airfields.

Close Support to the Army

In case of a war with China, although the IAF would be contributing significantly to the maritime air operations’ campaign, intense battles are likely along the northern borders which are almost completely in mountainous terrain. The adversary is likely to be quite sensitive to attrition in human resource due to its current demographic profile.

The agile Hawk is one aircraft that is ideally suited to fill a perceived gap in availability of Counter Surface Force Operations (CSFO) aircraft best suited for operations in mountainous terrain. It would be wise to upgrade Hawk aircraft with suitable mission systems and permitted anti-personnel weapons. Upgrade of propulsion system and airframe system is also possible. Production lines at HAL must be reopened and a couple of squadrons inducted specifically for this purpose.

Merely redeploying training aircraft when required for this role would not serve the purpose. Intense CSFO training and constant practice are essential to operate along with land forces in such inhospitable terrain. Use of existing multirole fighters for CSFO would be either sub-optimal or an overkill.

One way to counter China’s string of pearls noose is to build few ‘unsinkable aircraft carrier’ on our island territories to the east and west. To the east, we have one fighter/ bomber aircraft capable airfield at Car Nicobar and the runway at Port Blair is being extended. There is not much scope for extending the runway at Campbell Bay.

The Lakshadweep Islands to the West, however, is a different story. There is no runway other than a short one (1 km long) on Agatti island. Only way to build airfields capable of warfighting would be to do so after reclaiming land as China has done in the South China Sea. Such a process is going to be very expensive and necessary funding will be hard to come by.

There is another way to send troops, tanks and missiles quickly across seas. This is by large Wing-In-Surface-Effect (WISE) aircraft. These are aircraft that take off from water, trap a cushion of air between the aircraft body and surface of the Earth, and ride this cushion before again landing on water. They also produce lower induced drag, thus increasing efficiency. They are way faster than ships and also do not require elaborate airfield infrastructure.

The US Defence Advanced Research Projects Agency (DARPA) released an RFI for such aircraft on 18 August 2021. Requirement is, the ability to take off and land in water, ditching traditional runways. This would also help it land on islands and coastlines without airport facilities. DARPA also wants the craft to be able to fly high enough to avoid obstacles in the water. Importantly, a good WISE design should also allow the craft to fly in rough waters (waves up to 4 feet high) and weather.

Finally, the agency wants the craft to be able to carry at least 100 tons of cargo (a C-17 Globemaster III transport, by comparison, can carry 141 tons). DARPA envisions the new WISE design supporting floating bases at sea, connecting geographically disparate land bases over a very wide area. It also sees WISEs leading supply runs in combat zones, helping in combat search-and-rescue (SAR) missions, aiding in amphibious warfare, acting as a mothership for uncrewed robotic vehicles, and working long-distance patrols. India would do well to participate through the Defence Technology and Trade Initiative (DTTI).

There are significant gaps to be filled in enabling the IAF to act as a credible deterrent against China. While these are spread across the spectrum of conflict, gaps specifically in offensive fixed wing air forces have been addressed here. The assessment brings out the essentiality of twin-engine fighters for future operations, some of which need to have stealthy airframes.

To ensure flexible configuration, ease of manufacture, upgradability, maintainability and sustainability, these aircraft must be designed and developed in 21st century factories. The only way to bring China’s centre of gravity targets under credible threat is to procure long range stealthy bombers. Lastly, there remains an undeniable need to bolster IAF’s capability to be an effective contributor to counter surface force operations.

(The writer took premature retirement from the IAF after 33 years of service of which 11 were as test pilot for different fighter aircraft. Thereafter he joined HAL in 2014 as the Chief of Test Flying [Fixed Wing]. In this capacity, he carried out the maiden test flights of the first production standard Tejas IOC standard aircraft and also maiden test flight of the first Tejas FOC standard aircraft. He superannuated in March 2020.)