Paris Air Show 2019 lives up to its reputation

Le Bourget: Leaving a streak of thick white smoke, an emerald green flying object disappeared into the clouds that flanked the sun on the otherwise clear, first day of the 53rd edition of Paris Air Show. And then it was overhead; the roar of the engine deafening. But what transfixed the visitors was the belly of Pakistan Air Force’s (PAF) JF-17 Thunder. Painted on the deep green fighter were the white crescent moon and a star. 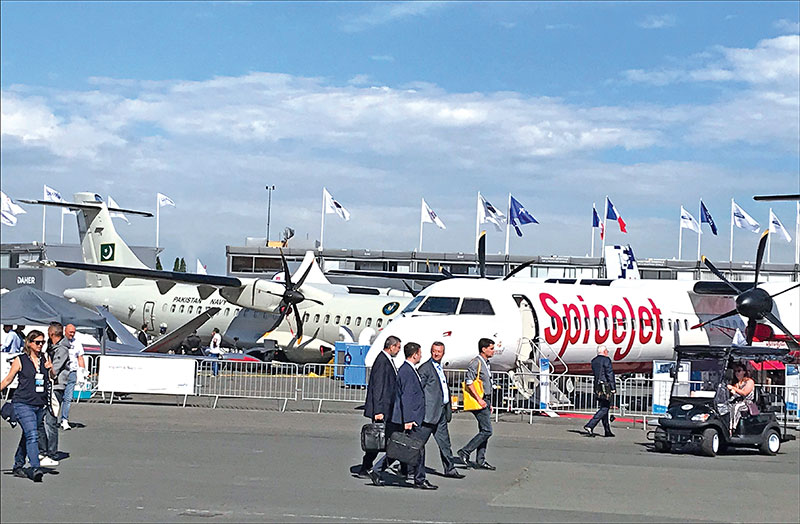 One of the Pakistan Air Force’s pilots manning the JF-17’s static display along with its weapons load grinned, a tad sheepishly. “We decided to paint one of our demonstration aircraft in the national colours”.

“We have brought three of them here,” he said. “Today, the one in conventional livery (grey) will fly.”

Given that JF-17 Thunder was the only fighter apart from Dassault Aviation’s Rafale to carry out daily flying duties at the show, perhaps, it made logistical sense to have three of these at Le Bourget. While JF-17 was brought to the Paris Air Show by the CATIC (China National Aero-Technology Import & Export Corporation)-PAC (Pakistan Aeronautical Complex) consortium, the fighters were from the PAF. Hence, the air force officers at the show — pilots, as well as the administrative staff — were from the PAF.

The PAF team included a woman officer too for good measure. That this officer, kitted in PAF’s overalls complete with a headscarf was one half of the pair that engaged with the media, communicated more than the press release she was handing out could. The backend support was provided by the marketing team comprising officials from both CATIC and PAC. But on the ground, green ruled.

The fighter pilots at the static display were understandably busy. Irrespective of its capabilities, the presence of a Pakistani fighter — a product of China-Pakistan collaboration — amidst state-of-the-art equipment was a matter of great curiosity. At any given point, there were onlookers with requests for a lookover of the aircraft.

“Sir, I am afraid you will have to wait. There are two more people before you who want to step inside the fighter,” a pilot told a visitor who looked like a photo-journalist.

You seem to be enjoying yourself at the show, FORCE remarked.

“Yes, this is a great exposure for us,” he said shyly.

The full weapon load of the fighter was displayed on either side of the aircraft, which has seven hard points including one on its belly. The missiles on display, all made in China, included a short-range air to air missile (AAM), a beyond visual range AAM, an air to ground missile, an anti-ship missile and a targeting pod.

Will you be able to integrate other missiles on the fighter?

“I think we can, but we don’t want to,” he said. “These are Chinese missiles. We are happy with them and we are now making them in Pakistan. There is no reason why we should look for other missiles.”


PAC located in a northern town of Punjab, called Kamra, is a wholly-owned manufacturing facility of the PAF. Hence, posting of PAF personnel to PAC Kamra is akin to a regular posting to an air force unit. It is not tantamount to deputation and does not impinge upon the flying career of the posted officers. This, according to the young fighter pilot in Paris, has two consequences, one positive and one negative. On the positive side, the PAF pilots get exposed to technology and its incubation. This gives them a better understanding of the machines they fly. They are also able to appreciate other platforms better which they encounter because of their friendly ties with other countries.

On the negative side, being a PAF entity, the progress at PAC has not led to a cascading effect on aerospace industry in Pakistan. “Had PAC been outside the PAF, even if government-controlled, it would have sparked a process of aeronautical industrialisation. The learning base would have widened and the industry in Pakistan would have benefitted from the consequent spin-offs,” said the pilot, who clearly understood more than just flying the fighter.

Russia’s Day in the Sun

Despite its small presence — United Aircraft Corporation (UAC), Russian Helicopters and United Engine Corporation (UEC) were the only participating companies — Russia managed a splash on the first day of the show itself through a combination of timing, imagination and craft.

Buoyed by the success of its multirole, multi-utility, twin-engine Ansat helicopter, which was unveiled last year at the Zhuhai Show in China and has already bagged two orders (from China and Vietnam), Russian Helicopters showcased it to the western world for the first time at the Paris Air Show.

Since Ansat is made by the Tatarstan-based Kazan helicopter plant, Russian Helicopters brought Tatar gymnasts to the show for the unveiling ceremony. The red and white livery of the two Ansat helicopters — one each in a VIP and heli-ambulance version — matched those of the gymnasts who performed before the static display. The official press release stated that the lithe and rhythmic movements of the gymnasts represented the grace of the Ansat helicopters!