It is now a foregone conclusion that the Indian Air Force’s (IAF) cherished goal of possessing the sanctioned strength of 42 combat aircraft squadrons (leave alone the required 55 for catering to a two-front limited warfighting scenario) will remain unrealised at least for the following three decades.

To make matters worse, the IAF’s force-mix will remain lop-sided, with 60 per cent of its combat aircraft force comprising heavy-multi-role combat aircraft (MRCA) and the remaining 40 per cent medium-MRCAs. And to top it all, the list of required force-multiplier combat-support platform-types (like aerial refuelling tankers, AEW & CS platforms, ISTAR battlespace surveillance platforms and turbofan-powered high-altitude/medium endurance unmanned aerial vehicles) keeps growing with every passing year. 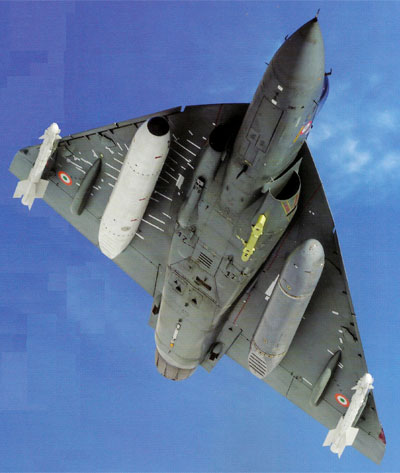 Several reasons exist for such a dismal state of affairs, the foremost of which is the IAF’s institutional inability to foresee by the late Eighties itself that the category of light-MRCA would be superseded in the coming decades on a global scale by that of the M-MRCA. Consequently, the homegrown Tejas Mk.1 and Mk.1A variants as they exist today (designed and built to the two successive air staff qualitative requirements (ASQR) that were released by the IAF between 1983 and 1995) remain severely sub-optimal in terms of performance parameters, while the ASQR for the projected LCA-AF Mk.2 variant has yet to be finalised.

As a result, the IAF will at best possess only 32 Tejas Mk.1 single-seaters and eight Tejas Mk.1 tandem-seaters (with 20 built to initial operational configuration standards and the other 20 to final operational configuration standards, with the latter expected by the year’s end), while the projected 73 Tejas Mk.1A single-seaters and 10 tandem-seaters (for four squadrons) is unlikely to be available for at best another five years due to the 300+ design changes mandated by the IAF (which starkly illustrates the professional ineptitude of the L-MRCA’s designer/developer, the DRDO-owned Aeronautical Development Agency, or ADA), which in turn will require the Mk.1A variant to undergo at least 200 hours of flight-tests in order to obtain its certificate of airworthiness.

And all these, in turn, will make it almost impossible for the IAF to place orders for the projected 201 LCA-AF Mk.2s (for equipping 12 squadrons), whose developmental period will now have to be stretched till 2030. And while ADA has brazenly showcased several designs and scale-models of the LCA-AF Mk.2 since 2013 despite the IAF’s still-elusive ASQRs, the IAF in turn continues to expand its wishlist for incorporating new-generation technologies into the LCA-AF Mk.2’s airframe, like a cockpit hosting panoramic active-matrix liquid-crystal displays, an airframe hosting a 1-metre fuselage stretch, nose-mounted infra-red search-and-track sensor, an internally-mounted wide-band self-protection jammer, four integrated digital radar warning receivers-cum-active jamming transmitters, four laser warning receivers, six missile approach warning sensors in a distributed-architecture layout in order to ensure all-aspect hemispheric coverage, a new-generation jet-fuel starter and on-board oxygen generation system, a combined HF/VHF/UHF-band software-defined radio, a combined air-to-air/air-to-ground software-defined tactical data-link, a SATCOM receiver/transmitter, and finally, a two-axis thrust-vectoring nozzle for the turbofan, all of which will — on paper — transform the LCA-AF Mk.2 into a fourth-generation M-MRCA.

Only two such remedies are available as viable options to arrest the IAF’s declining combat aircraft squadron strength: the procurement of another 44 Rafales off-the-shelf in the following decade in order to give the IAF an 80-aircraft strong fleet of dedicated deep-strike interdictors; and the off-the-shelf procurement of an initial 70 Super Su-30MKI H-MRCAs from Russia, with the remaining in-service Su-30MKIs of the IAF being upgraded in successive tranches by state-owned Hindustan Aeronautics Ltd (HAL) into Super Su-30MKIs (FORCE October 2018).


While these two steps will enable the IAF to wage short-duration strategic air campaigns, they will by no means fulfil the IAF’s need for additional tactical interdiction/defensive counter-air M-MRCAs and it is for this reason that the IAF is mulling the need for importing 114 single-engined M-MRCAs equipped with fourth-generation mission avionics, for which Lockheed Martin’s offer of licence-assembled F-16IN Block 70 aircraft is by far the most serious, cost-effective and common-sensical option presented so far.

However, the downside of this is that the ADA will be denied the funding required for financing the developmental processes of both the LCA-AF Mk.2 and the projected stealthy, fifth-generation advanced medium combat aircraft (AMCA). Hence, while on paper, the AMCA is due to replace the Jaguar IS, Mirage 2000Ns and MiG-29UPGs from 2040 onwards, in reality the AMCA’s developmental process is likely to conclude by 2050 at best and that too if funding is made available (a most unlikely proposition) to ADA.