The indigenously developed Tejas Mk-1A, Medium Weight Fighter and AMCA could finally free the IAF from its import dependency

It could be termed as a problem of plenty for India’s military aerospace industry which has three advanced fighter aircraft programmes currently underway in the Tejas Mk-1A, MWF and AMCA. While the Tejas Mk-1A and MWF are essentially 4th generation platforms with advanced sensors and weapons and based on the Tejas Mk-1 programme; the AMCA is an ambitious effort to develop a 4.5+ generation fighter aircraft with stealth features to meet Indian Air Force (IAF) requirements post 2030. If successfully developed and inducted into the IAF, the indigenous types could equip more than half of the IAF’s fighter Squadrons. 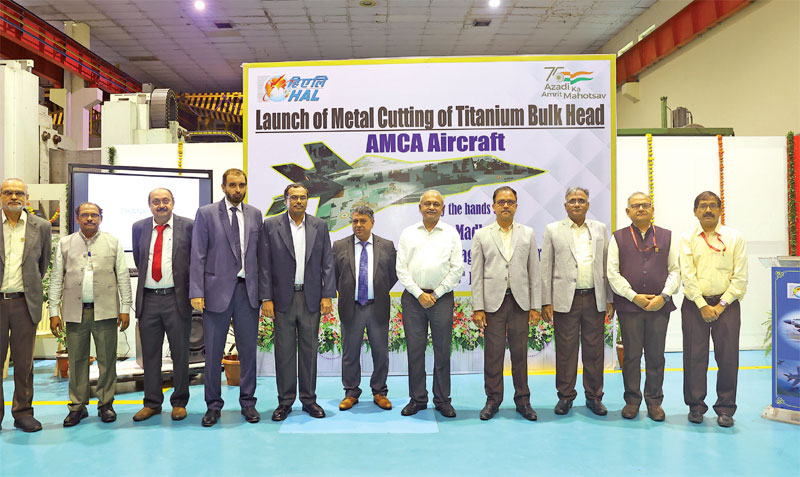 The ability to concurrently develop three fighter types will be a test of the maturity of India’s military aerospace design, development, certification and manufacturing ecosystem. In addition to these aircraft Hindustan Aeronautics Limited (HAL) is continuing with the Hindustan Jet Trainer 36 (HJT-36) ‘Sitara’ Intermediate Jet Trainer (IJT) and is close to receiving production orders for the Hindustan Turbo Trainer 40 (HTT-40) basic trainer.

2023 will mark three decades since the Tejas programme actually began in earnest when Government sanction was given to build two Technology Demonstrators (TDs) in 1993. The first prototype Tejas aircraft made its maiden flight in January 2001 and many would not have expected that in the two decades since then, only two Tejas Mk-1 squadrons would have entered operational service. “The time taken for these developments is due to complex technological challenges and due to the gradual development of the necessary eco-system. The technical challenges were faced in areas such as advanced avionics, digital fly-by-wire, composites, weapon simulation, testing and integration facilities and non-availability of raw materials,” the ministry of defence (MoD) stated in a 2019 parliament statement. The IAF had originally planned to induct two Tejas squadrons from 2012-2017 (12th Plan) and six additional squadrons from 2017-2022 (13th Plan).

Despite the myriad challenges associated with the programme, it has resulted in the creation of extensive infrastructure for design, development, testing, certification and production of a modern fighter aircraft. At the start of the LCA programme, India did not have many of the technologies required to develop a 4th generation fighter aircraft such as the ability to computationally evaluate the aerodynamics of complex configurations. Today however, DRDO has access supercomputing resources that allow it to compute flows around complex aircraft configurations.

The most positive aspect of the Tejas programme was the establishment of a nationwide network of Indian industries for the supply of aeronautical sub-systems and creation of a highly skilled workforce. The entire design and development cost of the programme is under Rs 10,000 crore. However, there are no realistic estimates available in the public domain on the development costs of the MWF and AMCA.

The AMCA programme is the most ambitious aviation programme ever undertaken in India and aims to develop two distinct fighter types for the IAF and Indian Navy (IN). Hindustan Aeronautics Limited (HAL) has entered into MoU with the Aeronautical Development Agency (ADA) for design and development of AMCA. As per Ministry of Defence (MoD) information released in March, the process for obtaining Cabinet Committee on Security’s (CCS) approval for design and prototype development of AMCA has been initiated.

A dedicated carrier borne naval fighter called the Twin Engine Deck Based Fighter (TEDBF) will also be developed. Officials state that the AMCA will be costlier than 4th generation fighter types. However, they say that since AMCA is an indigenously designed 5th Generation aircraft, it will be cheaper than similar aircraft available outside. Other nations developing advanced fighters in a similar class are Russia (Sukhoi Su-75 ‘Checkmate’), Turkey (Turkish Fighter Experimental ‘TF-X’) and South Korea (KF-21 ‘Boramae’).

Both AMCA and TEDBF are twin-engined fighter aircraft but feature significant design differences. The AMCA is a stealthier design (with an internal weapons bay) with a twin-tail layout and can achieve a top speed of Mach 1.8.  Interestingly, on its website ADA mentions that the aircraft will also carry the Joint Direct Attack Munition (JDAM). In addition to being fitted with an indigenously developed Active Electronic Scanning Array (AESA) radar, the AMCA will also be equipped with an Infra-Red Search & Track (IRST) sensor.

Roll-out of the first AMCA prototype is expected to take place in the 2023-24 timeframe and first flight is expected to take place in 2025. The AMCA programme has been underway for over a decade and the Draft Preliminary Services Qualitative Requirement was issued by the IAF for the new fighter type in late 2014. The AMCA can be considered as a replacement for the IAF’s fleet of Sukhoi Su-30 MKI fighter aircraft. The navy TEDBF on the other hand will replace the Russian made MiG-29Ks. Unlike the AMCA, the TEDBF concept has been showcased with a single tail and a conventional delta wing (with folding capability) and canard configuration. Both TEDBF and MWF will share the same engine--GE Aviation GEF414 INS6s.

Over the last few months, there have been several developments associated with the AMCA programme. In July, Hindustan Aeronautics Limited (HAL) which is the production agency for the future Indian fighter, announced that it had launched the ‘Metal Cutting for Titanium Bulkhead of AMCA aircraft’ as part of technology development at its Aircraft Manufacturing Division, Nashik. HAL will produce the AMCA at Nashik, now that production of the Sukhoi Su-30 MKI under license from Russia has been completed.