The Indian Navy’s modernisation plans are hampered by inadequate funds

The shift of the Indian Navy’s focus from its Western seaboard to the Eastern seaboard has brought about a sense of alarm on its ability to counter the People’s Republic of China’s dramatic naval build-up. The Indian Navy, however, remains a battle tested force and has extensive experience in operating a mix of indigenous, western and Russian origin naval equipment in addition to being able to exercise with the strongest maritime forces in the region. That said, it still needs to hasten its acquisition of modern war-fighting assets to contain the People’s Liberation Army Airforce Navy (PLAAN) in any future conflict. 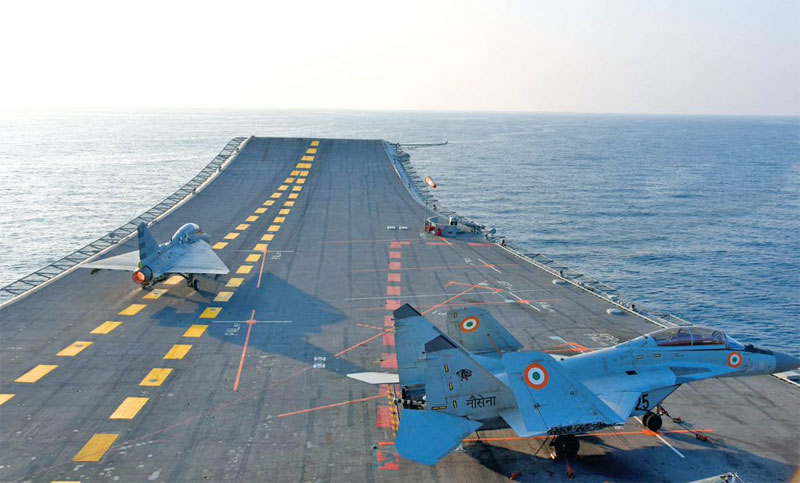 According to data shared by the ministry of defence, the navy’s revenue budget increased from 6.1 per cent in 2014-15 to 7.28 per cent in 2019-20, while its capital budget declined from 10.41 per cent in 2014-15 to 7.58 per cent in 2019-20. The pace of procurement of additional warships and submarines, carrier-borne fighters, naval helicopters and much more remains a matter of concern and could fall prey to competing inter-service requirements. Mindful of budgetary constraints, the navy has made a conceptual shift in its perspective-planning to focus on force levels as compared to the earlier focus on the number of platforms.

The navy receives the smallest share of defence spending amongst the three services, despite having to safeguard a 2.02 million square km Exclusive Economic Zone (EEZ). In addition to this it needs to patrol a large coastline of 7,516 km along with 1,197 offshore islands. Thirty-three per cent of the world’s bulk cargo and 66 per cent of its oil transit through the Indian Ocean Region (IOR), while 95 per cent of India’s trade by volume and 68 per cent by value are transacted by sea. Thirty per cent of India’s trade alone passes through the South China Sea.

The navy’s current ‘Maritime Capability Perspective Plan’ places a focus on capability acquisition instead of procuring greater numbers of maritime assets. The navy has plans to emerge as a 170 warship force by 2027 but this looks like a tall order, considering it has only 130 warships at present. There also remains a severe capability gap of Mine Counter Measure Vessels (MCMVs), Landing Platform Docks (LPDs) for expeditionary operations, survey ships and Diving Support Vessels, in addition to long overdue requirements to induct modern helicopters.

The navy’s fourth Scorpene Class submarine, INS Vela was commissioned into the Western Command in November. The fifth Scorpene is slated for commissioning in October 2022 with the sixth and final submarine of the P-75 programme, to be commissioned by end 2023. The P-75 Scorpene submarine programme is emblematic of the delays experienced in important defence programmes. Construction of six Scorpene class submarines by Mazagon Dock Shipbuilders Limited (MDL) was first approved by the Cabinet Committee on Security (CCS) in September 2005 and all six submarines will now be fully operational only by 2024, two decades after CCS approval. The P-75I programme to build six additional submarines also continues to inch along since 2008. MDL and L&T have been selected as the Indian Strategic Partners. Companies from five nations are competing for the tender - Naval Group (France), ROE (Russia), ThyssenKrupp Marine Systems (Germany), Navantia (Spain) and Daewoo Shipbuilding and Marine Engineering (South Korea).

The navy presently operates just 15 conventional submarines (4 Shishumar Class, 8 Sindhughosh Class and four Kalvari Class), along with a single indigenously developed nuclear submarine in INS Arihant. The navy’s second indigenously built nuclear submarine, Arighat is due to be commissioned into service soon. A worrying issue for the navy is that out of its existing conventional submarines, 13 are between 17 to 31 years old. In fact, the majority of India’s conventional submarines, which are of Russian (Kilo Class-‘Sindhughosh’) and German (HDW Class ‘Shishumar’) origin are now well over 25 years old. The last of the navy’s obsolete Foxtrot Class submarines were retired in June 2017 (INS Sindhurakshak), while INS Vela and INS Vagli were phased out a decade ago in 2010.

The navy’s future plan is deployment of 18 conventional submarines (SSK) and six nuclear submarines (SSN). This plan was first approved in June 1999 and called for 24 conventional submarines to be built in India by 2030. This is, however, unlikely to fructify even by 2040. The navy has resorted to Medium Refit cum Life Certification (MRLC) for six of its older submarines to ensure that force levels are not depleted drastically. The first MRLC for the navy’s Kilo Class submarines got underway in Russia in July 2016. The contract for the MRLC of INS Sindhuraj was delayed and L&T has been nominated as the preferred partner for the MRLC of the third submarine INS Sindhuratna in India.

The navy commissioned the lead ship of the Project 15B stealth guided missile destroyer, INS Visakhapatnam in November and remaining ships are to be commissioned at the rate of one per year between 2022 to 2024. The Project-15B warship building programme got under way in January 2011, at a project cost of nearly Rs 30,000 crore. This has since been revised to Rs 35,000 crore for the four warships—‘Visakhapatnam’, ‘Mormugao’, ‘Imphal’ and ‘Surat’. The keel of Visakhapatnam was laid in October 2013 and the ship was launched in April 2015. The Visakhapatnam Class is a follow-on to the Kolkata class (Project 15A) destroyers that were commissioned in the last decade. The seventh Indian Navy Frigate of P1135.6 Class was launched at Yantar Shipyard, Kaliningrad, Russia in October. Two P1135.6 Class warships are to be built in Russia and another two in India by Goa Shipyard Limited (GSL).