With fingers in too many pies, DefExpo 2020 sent out confusing vibes

In keeping with the FORCE tradition, the post-show report on DefExpo 2020 lays bare everything — the good, the bad and the ugly. While the article may appear critical, criticism should not be mistaken for mockery. The idea of highlighting the gaps has always been to help find ways of plugging them in the future. Given this, one feels a measure of satisfaction when regular exhibitors make a special pitstop at the FORCE stand at the Show to reminisce about some article that appeared some years ago in one of the issues. A ‘show article’ that is frequently recounted is the one that highlighted the state of the toilets at successive Indian defence and aerospace shows. 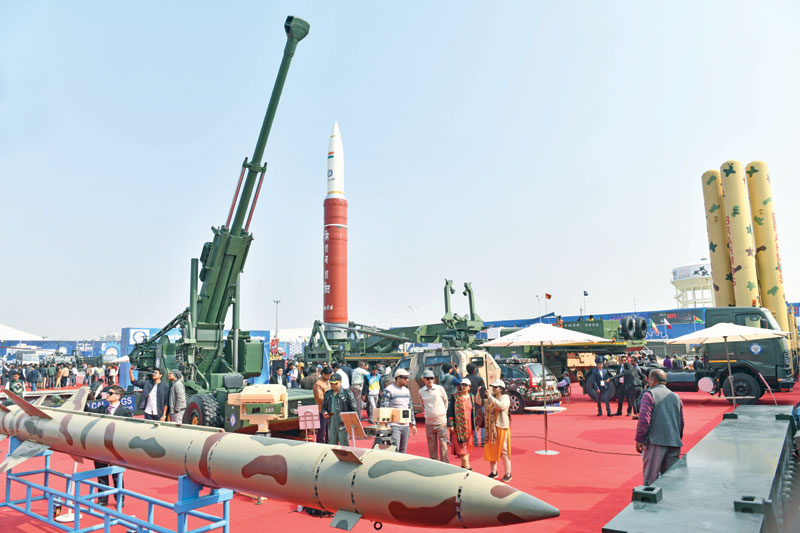 “I am sure somebody in the ministry of defence (MoD) was reading your articles,” one visitor to the FORCE stand at DefExpo 2020 in Lucknow told me. “I have noticed that the state of the toilets has progressively improved.” There is truth in the statement as far as the toilets at DefExpo 2020 were concerned. If there was one stand-out element about the show, it was certainly the toilets!

Every show has its own character and purpose. So do Indian defence shows, including DefExpo. It’s pointless to impose characteristics of other international shows on DefExpo, especially DefExpo2020, which was so unique that it cannot even be compared with its previous editions. Unfortunately, uniqueness is not always the good thing. Sometimes straying too far from the script can yield confusing results.

And that has been the case at DefExpo 2020, a show so mixed-up that it can no longer be called a land and naval systems show, which also used to make a passing reference to homeland security. Fighter aircraft flew at DefExpo 2020 to entertain the audience, while tanks kicked up coloured dust on the ground in simulation of land warfare. And nearly 15km away from the show venue, on the banks of river Gomti, Indian Navy and Indian Coast Guard performed their own tricks. According to a MoD official, part of the organising committee, the Gomti river extravaganza was simply a concurrent event, independent of the Show.

Fair enough, except that, after the previous edition of the Show in Chennai, the then organising committee had declared that the ministry has decided that henceforth all editions of DefExpo will have live water-based demonstration. Hence, all future locations will be along the water front. This was the measure of confusion about the nature of the show that the organising committee also did not know what it was doing and for what purpose. The same MoD official apparently told a foreign exhibitor, who complained about the lack of clarity and support at the show, that DefExpo was an Indian exposition meant to showcase Indian industry. Consequently, his job was to support Indian industry and not the foreign original equipment manufacturers (OEMs), effectively telling him to take a hike. A fulsome display of Atithi Devo Bhavo (guest is God)!

The question that arose then was, what was the purpose of all this? What was being showcased and to whose benefit? If the idea of DefExpo was to showcase the capabilities of the Indian industry so that they are able to become part of the supply chain of global OEMs or their offset disbursement partners, then how will the labour of the Indian military using imported wares help in this?


Live demonstration is a worldwide practice and routinely happens in most international air, land and naval shows. In these shows, equipment manufacturers are the stake-holders in demonstrations because they want to attract new customers. Often, the national military is co-opted in the demonstration for two reasons.

One, to underline the fact that the equipment has been successfully operationalised and is being operated by users (and not by the OEM under controlled circumstances).

And two, the armed forces, and because of them the MoD, has been a stake-holder in the development of that particular system and consequently its export.

In both cases, the objective of the money and time spent, not to speak of the wear and tear of the equipment, is for purely commercial purposes. Only at air shows, a couple of days are earmarked for civilians to view the aerobatic display, which has been judged to have entertainment value.

However, at DefExpo 2020, the entire exercise of equipment demonstration was done for the viewing pleasure of the visitors, without any commercial considerations. What can be the possible explanation for the aerobatics by Su-30MKI fighters at DefExpo?

Moreover, by creating a dedicated aerospace zone where indigenously developed Light Combat Aircraft (among others) were displayed, DefExpo no longer remained a land and naval systems show. It was a show for everything, including clothes, handicraft, home ware and food items, which incidentally were being showcased at the UP pavilion, and consequently adding to the number of exhibitors!

In the attempt to appear bigger than ever, the organisers diffused the focus of the show. It wouldn’t be surprising if this has an impact upon Aero India, a show dedicated to defence aviation. Ideally, the MoD should have merged the civil aviation show with Aero India, creating an integrated aerospace show that could have become the ’go-to’ event in South Asia. Instead, it combined elements of defence aviation into the land and naval system show, taking the focus away from critical technologies which are germane to these domains. After all, who can compete with the aerial manoeuvres of a fighter plane at any show – the fighters bring both glamour and excitement.