Government needs to engage China at the highest political level

If the US highest military officer, the Chairman of the Joint Chiefs of Staff Committee were to issue a military threat to China on the South China Sea, an appropriate response from the People’s Liberation Army (PLA) would have been assured.

When India’s Chief of Defence Staff, General Bipin Rawat recently said that the military option was on the table if India-China talks on Ladakh fail, there was deafening silence from the PLA.

The reason was simple: Discerning observers of new age technologies understood that either General Rawat was grandstanding, or was simply out of his depth on the changed character of warfare. The huge gap between the technologies and the concept of operations or the art of war-fighting between the PLA and the Indian military could perhaps be explained by the analogy of the 1991 Gulf War. The war lasted 43 days of which the ground war was a mere 100 hours, essentially a mopping up operation. The Iraqi Army’s elite Republican Guards battle-hardened in the decade long war with the neighbouring Iran were beaten by the US technology without a fight.

The world, especially the PLA, was dumbstruck by the US’ new concept of warfare pivoted on stealth, guided munitions, stand-off ranges, and above all battle network centricity (real time connectivity between sensor, shooters and command post). The PLA was quick to understand that it did not have the technology, scientific-industrial infrastructure, and finances to match the US military’s technological superiority.

But it could develop ‘systems destruction warfare’—capability to cripple US battle network’s command, control, communication, and intelligence systems—to deny or delay information to the enemy which is crucial for timely decision-making in war. This was sought to be done by both non-kinetic and kinetic means, namely, by focussing on cyber and electronic warfare, and missiles (ballistic and cruise) capabilities. By early 2000, the PLA’s ‘assassin’s mace’ capabilities meant to incapacitate the enemy, suddenly and totally, by denying him information, instead of fighting him directly, had caught the US military’s attention.


A bigger shock awaited the US military when by 2012, it realised that the PLA had become a peer competitor in Artificial Intelligence (AI) and 11 new age disruptive technologies poised to reshape warfare and geopolitics while ushering in the fourth industrial revolution for prosperity. These technologies are microelectronics, cyber, 5G wireless communications, space, hypersonic, directed energy weapons, autonomy, network communications, missile defence, quantum technologies, and nuclear triad. In certain technologies like 5G, AI and quantum, China was suspected to be ahead of the US. This resulted in the US announcing its Third Offset strategy in 2014 to focus on robotics, autonomy and human-machine fusion. The Third Offset strategy, meant to meet China’s challenge, was testimony to the PLA’s technology driven upward trajectory for war-fighting.

Unfortunately, Indian military leaders fixated on Pakistan and counter-terror operations for 30 years since 1990, not only missed this revolution in military affairs, but also failed to fully appreciate the burgeoning challenges on the Line of Actual Control (LAC) with the PLA. In this, they were in good company of the Indian diplomats who continued to dismiss China’s purposeful moves—military reforms, focus on non-contact technologies, militarisation of Tibet Autonomous Region and frequent pronouncements on Kashmir—as mere posturing.

And since we are used to dismissing China’s strategy as posturing, we believe that sloganeering is a good alternative to planning and war-preparedness. A product of this legacy, General Rawat is no different. Deep selected for his stated expertise in counter terror operations to become the army chief in December 2016, General Rawat is hamstrung by his history to understand PLA. 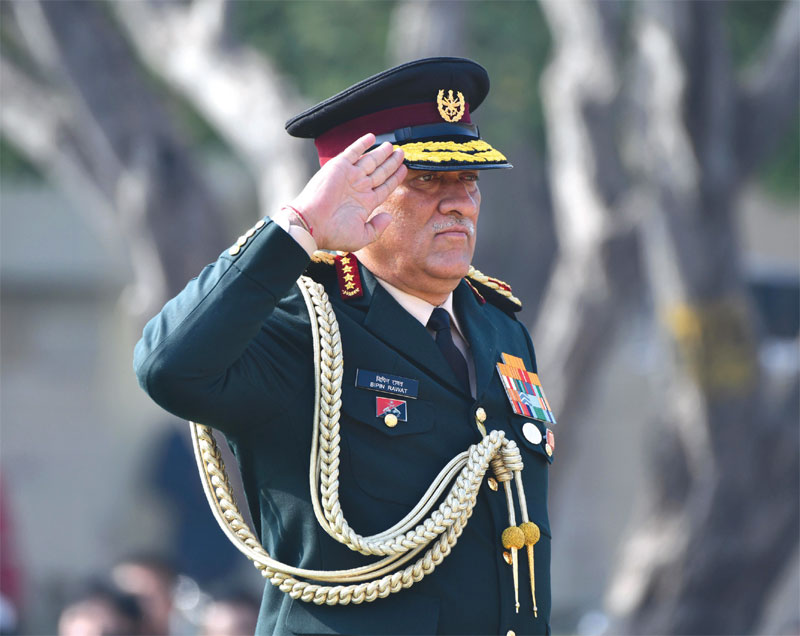 But PLA is not the Pakistan military. It should have been obvious that a new template for warfare is needed to address or counter China. What works with Pakistan will not work here. Surely, the PLA will not fight to Indian Army’s strength which is battle-hardened manpower. It would instead fight to its own strength: technology. When the CDS threatened China, he betrayed ignorance of PLA’s modern war-fighting capabilities. It was also lost on him and most analysts that the 2017 Doklam and the Ladakh crisis are as dissimilar as chalk and cheese.

Assuming that General Rawat is reckless and decides to execute his manpower-centric plan by opening up a new front on the 3,488km long LAC to put pressure on the PLA to evict occupied territory in eastern Ladakh; once the first shot is fired from the Indian side, an instant response from the PLA with two likely simultaneous actions based on its capabilities is certain.