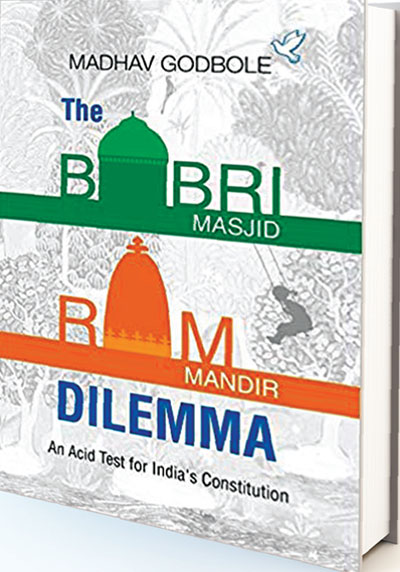 I have just finished reading this brutally frank and insightful book, The Babri Masjid-Ram Mandir Dilemma: An Acid Test for India’s Constitution by Madhav Godbole. The former home secretary was in the saddle when the Babri Masjid was demolished and its repercussions shook the nation to its foundation.

Since then the divisive tentacles of communalism have gripped the nation. Godbole saw things from close quarters and has truthfully reported his observations. I also had a telephonic conversation with him to clarify some doubts on the issue. Foremost, why did it take him three months after the horrific incident to put in his papers for premature retirement since his sane advice and series of recommendations was spurned by his super ‘Boss’, Prime Minister Narasimha Rao. If he had resigned immediately, it would have had an electrifying impact. His explanation was that attempts were being made to make him the scapegoat and he had to protect his honour, which was only possible whilst he remained in service.

The cover of the book and the author’s note on the jacket convey the essence of its contents. The Preface argues that if unbiased and real facts on the incident are widely disseminated, it would help change perceptions. This is over optimism since the social media has intractably hardened views and cemented positions. Chapters 1-3 cover the subject of the book’s title. The author mentions that L.K. Advani was the architect of the Ayodhya movement and the Babri Masjid could have been saved if Rao had acted on the advice given by the home ministry. He also asserts that all organs of the central and state government, governor B. Satyanarian Reddy, (VP Singh’s appointee in 1990) and chief minister since 1991 (Kalyan Singh) of Uttar Pradesh and, regretfully, the judiciary failed in their responsibility. It was not the Constitution which was found wanting but the people who were in charge of administering it who failed the Constitution.

I was on a one-year sabbatical at the College of Combat, Mhow, MP when the tragedy unfolded on 6 December 1992. We sat glued to our TV sets watching the smug faces of the leaders of various Right-wing organisations, delirious with joy, as the demolition progressed. What surprised me was the paralysis of the large number of law-enforcing personnel present there. They were passive if not complicit. The ‘ostensible long arm of the Centre’ was totally paralysed as there was no political will to act. Would the same be repeated if an Ayodhya like situation developed at Varanasi and Mathura?


The PM was lulled into a sense of complacency by the assurances given by the UP government and the governor of the state that the shilanyas would be peaceful. A recommendation for imposing President’s Rule and moving central paramilitary forces to Ayodhya in the face of stiff opposition by the state government in order to prevent the influx of kar sewaks were brushed away by the prime minister. The reason for recommending the above was that once the kar sewaks assembled in large numbers, the options available to the central government would have been closed. The procrastination on the part of the prime minister resulted in just that. He refused to judge the gravity of the situation and ridiculed the idea of holding a cabinet meeting at midnight when the situation warranted it. Rao’s ‘feigned amnesia’ was governed by his belief that ‘not taking a decision was also a decision’ (and a nationally disastrous one at that!).

Rao’s arguments of non-invocation of Article 356 are unconvincing. This same article has been used in cases of lesser gravity. Rao made much of the advice of the UP governor against imposition of President’s Rule on the specious plea that ‘the governor is in charge of the state’. The governor is in charge only when President’s Rule has been imposed. The day-to-day proceedings of the case by the Supreme Court also gave Rao an excuse not to dismiss Kalyan Singh’s government. In actual fact what held him back was fear of a Hindu ‘backlash’, if not his secret, undeclared sympathy for kar sewaks. This deliberate dereliction of duty is unpardonable – but Rao’s leadership was weak and he was disinclined to taking hard decisions.

Kalyan Singh resigned on 6 December 1992 after the deed was done and reaped the fruit of his labours ever since. (He was belatedly sentenced to a token punishment of a day’s imprisonment and a nominal fine of Rs 2,000 for contempt of the highest court of the country). President’s Rule was imposed the same evening. Significantly, by design or sheer helplessness, the central government delayed deployment of central police forces till the morning of December 7. This allowed the make-shift temple to be built. Advani in his autobiography My Country, My Life termed it ‘shrewdness on the part of the PM’ or ‘Divine Intervention’. He was also hypocritical to write that he was ‘extremely distressed when the structure was demolished on 6 December 1992, because it was illegal, forceful action’.

A Commission of Inquiry under retired high court judge M.S. Liberhan was constituted on December 15 to investigate the tragedy. He was given three months. However, it dragged on for 17 years, till 30 June 2009. Various attempts to scuttle the commission, non-cooperation of the UP government and intervention of Allahabad and Delhi high courts delayed the inquiry. The commission submitted a 10,000 pages report, too voluminous to be examined in detail and now consigned to the archives. Kalyan Singh was indicted and top BJP leaders like Atal Bihari Vajpayee, Advani and Murli Manohar Joshi, who were known as ‘pseudo moderates’, were declared intellectually and ideologically responsible for the mosque’s demolition. Advani, in his book, expressing regret, remarked: ‘But it did mark a day of Hindu awakening of truly historic import’. The author, however, feels that not all Hindus agree with this assumption. My own observation is that on the day of the demolition my friends seemed to watch me closely. I had learnt to remain pan-faced and accept the inevitable, stoically. A large number genuinely felt bad at the tragedy and privately expressed anguish to me.

As a redeeming act of penance, the PM declared publicly that the Babri Masjid would be rebuilt. Where, was the more important question. The author infers that Rao really intended to rebuild one at a different location in Ayodhya. The Places of Worship (Special Provisions) Act of 1991 was enacted which declared ‘that the religious character of a place of worship, existing on 15 August 1947, shall continue to be the same as it existed on that day’. Section 5 of the Act, however, excluded Babri Masjid-Ram Janambhoomi. This Act has no teeth and is not an effective deterrent against future mis-adventures. The author has rightly pointed out that ‘rewriting history and apportioning blame for and seeking to correct the perceived and/ or real historical wrongs will merely increase the communal divide and keep the country perpetually on the boil’. This highly emotive religious issue has been the driving force behind the Bharatiya Janata Party’s (BJP) search for recognition and political power. The Congress Party believed that it would be political suicide if they openly opposed the construction of the temple. This was ‘a rare situation in which the interests of both parties on opposite side — the BJP and the Congress — converged’.

The perpetrators, after the deed was done, made strenuous efforts to show that they had no hand in the demolition but the Liberhan Commission identified them. Only Sadhvi Pragya Thakur, now rewarded by a seat as MP in the Lok Sabha, openly admitted to her role. It is now 27 years since the Babri Majid was demolished and not a single person has been found (or will be found) responsible for the dastardly criminal act. The author has held former PM Rajiv Gandhi as the ‘first kar sewak’ for allowing the laying of the foundation stone of the Ram Mandir 9 November 1989. On a minute examination of the superbly written book it is evident that kar sewak No 1 is Rao for dereliction of a national duty, kar sewak No 2 is Advani for whipping up passions to a feverish pitch and kar sewak No 3 is Singh for impeding efforts to save the mosque.

Some other relevant chapters have also been included. Chapter 4 covers ‘The Daunting Challenges to ‘Sab Ka Saath, Sab ka Vikas, Sab Ka Vishwas’. There has been a drop in minorities being represented in government jobs even as they are politically and economically marginalised. There has been a decrease in communal riots but increase in polarisation and targeting of individual Muslims by vigilantes. The police, too, has become totally communalised and it is essential not to commit the army to resolve civil strife for extended periods. The weapon of the last resort must retain its apolitical, unbiased cutting edge. Secularism, defined by the Supreme Court as a ‘part of the basic structure of the Constitution’ is under scrutiny. The Constitution (Scheduled Castes) Order 1950 which had originally declared that no non-Hindu could be a scheduled caste (SC) was later amended to cover Sikhs and Buddhists. Logically, since now the Muslims are at the lowest rung of the index of poverty and deprivation, they should, according to the author, be also included. I totally agree with him. If that cannot be done, then they should be accorded ‘affirmative action’, especially in the field of education. They must be allowed to lag behind because the speed of national progress will depend on the slowest community. Issues pertaining to secularism and concerns regarding treatment of minorities are discussed threadbare. The author asks ‘Are we at a dead end in dealing with communalism?’ He concludes that riots are not epileptic seizures but malignant cancer.

Chapter 5 is grandstand view of ‘Looking Ahead: A Formidable Agenda’ and Chapter 6 ‘Afterword’ recommends some possible solutions. The author feels that only an amicable solution between the aggrieved communities is the answer. He recommends that the disputed site be used partly for construction of a new Masjid and partly for the construction of a Ram temple, with only a vertical wall in between to emphasise the unity of religions. This would have been an ideal solution. Two places of worship, next to each other, are not a rarity in India but now hardened positions on both sides on Ayodhya make this recommendation, utopian.

While looking through the prism of constitutional amendments, legal changes and the well-meaning remedial steps, these might be well-nigh impossible to implement in view of the high degree of polarisation which has set in. The Supreme Court will soon deliver its judgement on the case. It is my fervent hope that they award the whole site to the majority community because even if the judgment is in favour of the Muslims, they will never be allowed to take possession of the land. It will trigger further blood-shed and violence. Muslims can be placated by giving cast iron constitutional guarantees that there will be no more conversions to places of worship.

I am an optimist and firmly believe in the inclusive nature of Indian society. That is why my family decided to remain in the land of our birth. I strongly recommend this book to all who stand for a peaceful, progressive and modern India.