An extract from the chapter AI, Autonomy, and the Third Offset Strategy 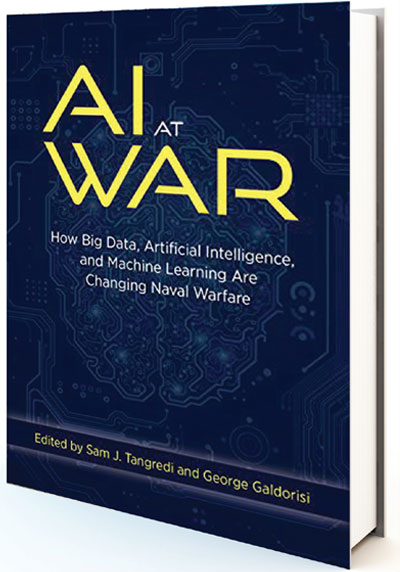 Universal digitization and widespread insertion of autonomous systems at rest and in motion into battle network grids are expected to lead to new forms of human-machine collaboration and human-machine and machine-machine combat teaming. These, in turn, could lead to new operational concepts and organizational constructs. The framers of the 3OS expected their emergence would signal the development of a new type of “algorithmic warfare”—the next logical evolutionary step in battle network development. However, they also posited that the “evolutionary” emergence of algorithmic warfare might lead to “revolutionary” battlefield results if it allowed joint force guided munitions battle networks to operate at a higher operational tempo than any adversary network.

For example, sensors that are equipped with field programmable gate arrays and are capable of onboard machine learning could discern objects on their own without having to download the raw data to a processing center. Analytical tools powered by machine learning could assist intelligence analysts to discover patterns in complex multidomain scenarios characterized by enormous amounts of heterogeneous data. Decision aid tools could help develop courses of action for a commander’s review and consideration. Autonomous cognitive cyber and electronic warfare tools could help win the battle for electromagnetic spectrum superiority. Network-enabled autonomous weapons could coordinate their attacks with other weapons or manned platforms or provide information on enemy defenses to trailing salvos, which could then modify their attack plans (i.e., course of action).

At some point, the 3OS proponents hypothesized that this aggressive pursuit of narrow-task AI-enabled autonomous systems in all battle network grids would lead to the emergence of a new type of human-machine collaborative battle network. These new networks would be the physical manifestation of algorithmic warfare, capable of

In addition to enabling a much higher and more sustained operational tempo, widespread autonomous systems and operations would likely allow the joint force to operate more effectively during periods of denied or intermittent communications and conduct operations requiring high degrees of complexity and coordinated action, especially during multidomain operations. They were also expected to reduce the number of blue-on-blue and blue-on-green engagements and reduce collateral damage to both noncombatants and civilian infrastructure.

Importantly, the framers of the 3OS did not expect the decisions made by narrow-task autonomous systems to always be perfect. Indeed, given the state of contemporary AI capabilities, it is understood that these systems would make mistakes in combat just as humans do. Indeed, the 3OS working definition for machine intelligence was “the programmed ability of a machine to make faster decisions as well as, or better than, humans.” As long as machines could make faster, more relevant decisions that were no worse than one might expect from decisions made by humans, improved operational tempo and combat performance exceeding that from legacy networks should result.


The Offset After Next: Robotic Warfare

In essence, algorithmic warfare could “power up” legacy guided munitions battle networks—allowing them to achieve and sustain a higher operational tempo, operate effectively during periods of network and communications outages, preserve forces by substituting machines for humans for especially dangerous tasks, and reduce collateral damage. The 3OS concept posits that the first competitor who successfully demonstrates algorithmic warfare and operates its associated human-machine collaborative battle networks may gain a decisive edge in a major conventional military confrontation.

That said, because artificial intelligence was a dual-use commercial technology, it was well understood by 3OS innovators that all competitors could—and most likely would—pursue variations of algorithmic warfare and human-machine collaborative battle networks, especially if their expected benefits were further demonstrated in battle. The Chinese People’s Liberation Army, in particular, sees artificial intelligence as providing the means to potentially surpass the U.S. military in operational effectiveness. Therefore, even if the joint force was the “first mover” in algorithmic warfare, it might not enjoy the longer-lasting competitive advantages that came with the first and second offset strategies. Accordingly, the 3OS had a more dynamic temporal dimension than the earlier offset strategies, during which the department would always need to be thinking about, and actively pursuing, the “offset after next.”

Up until now, thinking about the offset after next has never amounted to much more than institutional brainstorming and assigning organizations specific time horizons to pursue new ways and means for competitive advantage. For example, the strategic capabilities office had (and still has) the responsibility for pursuing competitive advantage inside the first future years defense plan (FYDP). This generally came in the form of modifying existing systems for new missions, such as modifying the Navy’s SM-6 surface-to-air missile to perform antiship strikes. Meanwhile, the cost analysis and program evaluation directorate and rapid capability offices of the armed services concentrated on accelerating the fielding of new capabilities in the second and third FYDPs. Lastly, the Defense Advanced Research Projects Agency focused its attention on developing entirely new capabilities in the fourth FYDP and beyond.

By establishing responsibilities for constantly and deliberately thinking about maintaining an advantage in an intense temporal competition, the 3OS sought to help the joint force forge, maintain, and perhaps extend its military-technical superiority over time.

Without question, however, the primary emphasis of the 3OS was on jump-starting the department’s efforts in the near term by devoting more spending on research and development (R&D) of artificial intelligence and its associated technologies (particularly machine learning). Near-term efforts included testing, demonstration, and fielding of numerous human-supervised narrow-task systems and applications, such as Project Maven, a computer vision application that analyzes full motion video feeds. These efforts incorporate experimentation with more advanced autonomous systems, such as the Navy’s Sea Hunter unmanned surface vessel. They also encompass the development of new concepts of operations and organizational constructs that exploit and employ them. It was expected that a top-down departmental emphasis on algorithmic warfare combined with bottom-up service wargaming and experimentation would lead to innovation at scale throughout DoD.

The expectation was that algorithmic warfare and its associated human-machine collaborative battle networks would inevitably lead to increasingly greater reliance on unmanned systems over time, for three reasons. First, the joint force is steadily pricing itself out of a human-centric force. Personnel costs for the all-volunteer force consistently rise faster than the rate of inflation, making personnel costs the most expensive component of defense spending. The average cost for an active-duty servicemember is now well over $100,000, and it continues to grow year after year. Second, as all great power competitors achieve rough parity in guided munitions battle network warfare, the lethality of future conventional combat will be staggering. Third, improvements in artificial intelligence and autonomous control systems will make unmanned systems increasingly capable of taking on more complex (and dangerous) battlefield tasks. For all these reasons, the 3OS expected future combat operations would gradually rely far more heavily on human-machine and machine-machine combat teams.

At some undefined point, the steady increase in the ratio of human-machine and machine-machine systems and combat teams to manned systems and combat teams was likely to reach another tipping point and result in new forms of robotic warfare much different from “the existing means of war.” Indeed, the expectation was that robotic warfare would likely usher in a new military-technical revolution. If true, the United States must strive to be a “first mover” in this new military regime, and the 3OS—with its pursuit of algorithmic warfare and human-machine collaborative battle networks—is the first step in its direction.