How and why did the scandal explode? Why was Michel’s name dragged into it? 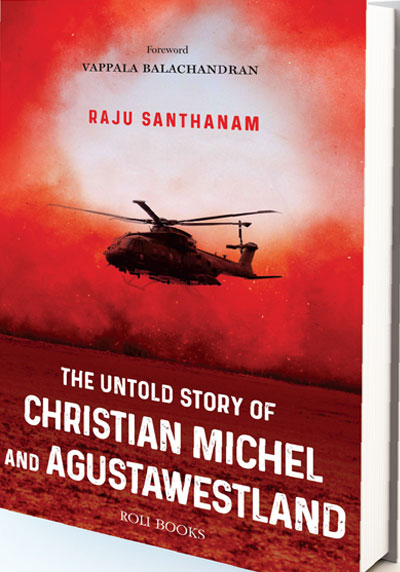 On September 24, 2006, the Indian government issued a tender for 12 VVIP helicopters. After reviewing the tender in 2007, it became clear that there were three aircraft capable of being compliant, the Sikoraky S 92, the AW101 and the MIL 17. The likely winner was expected to be the Russian MIL 17 as a lot of the specifications were written around this aircraft — cabin height, operation, ceiling height, etc. To this day it has remained a mystery as to why the Russians withdrew. Their argument was that they did not wish to put up a bid bond as they were a state enterprise.

After years of evaluation, on February 8, 2010, AgustaWestland was awarded the contract, much to the irritation of its competitors.

After Michel’s discussions with Orsi, ending 2006-07, he began to get on well with Orsi, much to the concern of Haschke. He could see that Orsi was discovering that Haschke had no understanding of India and that Haschke’s main purpose, as far as Finmeccanica was concerned, was to do the company’s bidding inside AgustaWestland.

In early 2009, AgustaWestland was owned by Finmeccanica, which is where Haschke’s power lay. Haschke is said to have told Michel that there would be a new chairman of Finmeccanica appointed in the coming years, who was also his good friend, and Haschke explained he took care of many Finmeccanica executives. If Michel did not contribute some funds to support this, ultimately he would lose his job.

The next major event was Mario Monti being appointment Prime Minister of Italy (a technocrat, not a politician), who did not appoint senior executives of industries on the basis of patronage. By early 2011, the government of Mario Monti was convinced that a top to bottom shakeout of Finmeccanica management was necessary. The key reason for this conclusion was a running investigation by the Italian authorities into Selex Sistemi Integrati for the supply of air traffic control radar, where kickbacks were believed to have been given to Italian politicians. Marina Grossi, wife of Guarguaglini, chairman of Finmeccanica, was running this division. The second investigation by magistrates in Naples was into alleged kickbacks in a deal to sell a waste management system to Naples supplied by Finmeccanica, in which the Naples prosecutor believed Lorenzo Borgogni, head of external relations Finmeccanica, had arranged Euro 40 million (Rs. 3,23,12,18,520) worth of kickbacks for the Italian administration.

On the basis of this and recommendation from many people (including members from the political party, the Northern League), Monti brought in Giuseppe Orsi in April 2011 as CEO of Finmeccanica. Guarguaglini retained responsibility for strategy acquisitions, asset sales and government relations.

Orsi, as CEO, began investigating corruption inside Finmeccanica, which led to the arrest of Borgogni and an investigation into Guarguaglini’s wife. Orsi also prepared the sacking of some 27 non-executive directors, many of whom were appointed by political patronage.

On November 15, 2011, Borgogni, under serious pressure from the Naples prosecutor, agreed to a plea bargain to avoid jail, having been caught embezzling approximately Euro 6 million (Rs. 48,46,82,778). The basis of his plea bargain and part of his claimed evidence was that Euro 10 million (Rs. 80,78,04,630) had been paid to the Northern League in return for them supporting Orsi’s appointment. For the prosecution and its desire for public acclaim, this seemed too good a chance to miss despite the fact that there was no evidence to support their stance. It was common knowledge that Finmeccanica was a company based on patronage, political lobbying for postings and corruption at the highest levels. Meanwhile, Guarguaglini, realizing that he would soon be forced to resign due to the mounting investigations against him and his wife, had to plan his exit. The new chairman of Finmeccanica would have to be a man who would protect him and his wife from further investigations while maintaining the internal system of patronage. Guarguaglini had chosen a good friend of Haschke for this position — Luciano Zampini. In Zampini’s testimony to the court, he revealed how Guarguaglini had assured him of the job and when Orsi was made CEO, Guarguaglini rang Zampini and said it was the Northern League who pushed for Orsi, upsetting his plans.


Now Guarguaglini made his final play. The dual management situation of Finmeccanica between Guarguaglini and Orsi due to Orsi’s launching a number of investigations into Guarguaglini’s friends and wife led to immense friction between the two men. Guarguaglini, believing that he had political support, called for a showdown on December 1, 2011 with the board of directors. He made it clear that unless he was given the authority he wanted, he would resign. He had expected the directors to fall in line; instead the board of directors granted him Euro 6 million (Rs. 48,46,82,778) and accepted his resignation.

Thus, the stage was set for the next level of confrontation.

Italian politics since the war had been messy, with an average of one new government per year. Mafia and political corruption was endemic. The only defense people had against this was the judiciary and, after the dictatorship of Mussolini, the Italian people saw to it that the government could never control the judiciary.

Italian prosecutors therefore see it as their primary function to aggressively go after the Mafia and political corruption. This they have done relentlessly and in a number of cases paid the ultimate price. No one can detract from this remarkable achievement. However, as the power of Italian politicians can quite easily wane in this new environment of Wikileaks and media exposure, the judiciary is finding it increasingly difficult to adjust to the new ground realities.

When Borgogni walked into the office of the Naples prosecutor, he knew that even though he had no evidence whatsoever (and admitted as much in his interview), by merely mentioning that he had heard that Euro 10 million (Rs. 80,78,04,630) was paid to the Northern League to have Orsi made CEO of Finmeccanica, the prosecutor would not be able to resist taking this up. Both Orsi and Michel thought this to be so ridiculous a charge that for months they did not take it seriously enough.

The remarkable weakness of the case could not be better emphasized than in the notice/writ of summons Michel received on January 9, 2014 issued abroad, stating, “this office will proceed against him for the offence in Art. 7 co., cp. 3L, 194/1975, etc. which have taken place in some unknown place abroad, sometime before or near the date of February 28, 2010”.

This writ, which Michel showed to all on his legal team, was beyond their comprehension. Broken down, it stated that Michel had committed an unknown offence in an unknown place in an unknown time, and that he was going to be prosecuted for it.

He later discovered that even an arrest warrant on February 13, 2014 would be issued against him on this basis.

There was also a racial issue in that the Northern League party had put a northern businessman in charge of a Southern Italian company. When the prosecution was moved to Milan he had expected some relief on the political nature of the trial; however, it was confirmed to him by a number of people being interrogated in Milan that the entire focus of the prosecution was as far as he was concerned, the Northern League party.

The prosecutors had no interest in India and were purely paying lip service. This was emphasized as India had agreed to be a party to the prosecution, and therefore it had a right to receive all court documents, cross-examine witnesses and attend every hearing, and with the right to share in any compensation. When AgustaWestland, orchestrated by Finmeccanica, arranged a plea bargain, paying Euro 8 million (Rs.64,62,43,704) as compensation, which they announced on July 29, 2014, nothing had been advised to the Indian party nor were they eligible for any compensation even though Haschke had admitted in court to paying many Finmeccanica executives with money allegedly stolen from the Indian contract. Apparently, Michel found this an incredible breach of faith and it was no surprise to him that after the judgement of October 9, 2014, India did not see any point in appealing. Even New Delhi realized that the true culprit of this affair, with financial wherewithal to compensate India, had been let out.

When the arrest warrant was issued against him on February 13, 2014, it still mentioned the allegation that he had paid Euro 10 million to the Northern League. With the judgement of October 9 (which did not even bother addressing the Northern League but pointed out the impossibility of Michel’s involvement in corruption), his arrest warrant was immediately revoked and he thought that would be the end of it.