The term air defence was probably first used by Great Britain when it created the Royal Air Force command in 1925. In those days, air defence arrangements were also called ‘anti aircraft’, abbreviated as AA. After World War I, it was prefixed by ‘light’ or ‘heavy’ (LAA or HAA) to classify the type of gun or unit. Nicknames for anti-aircraft guns include AA, AAA or ‘Ack Ack’ (from the pronunciation used by the British for transmission of AA) and ‘Archie’ (a World War I British term).

The earliest known use of weapons specifically made for the anti-aircraft role occurred during the Franco-Prussian War of 1870. After the disaster at Sedan, Paris was besieged and French troops outside the city started an attempt at communication via balloons. According to Nicholas Hobbs’ Essential Militaria: Facts, Legends, and Curiosities About Warfare Through the Ages, the Prussians mounted a modified 1-pounder (37 mm) gun—the Ballonabwehrkanone (Balloon Defence Canon) or Bak—on top of a horse-drawn carriage for the purpose of shooting down these balloons.

In some armies, the term All Arms Air Defence (AAAD) is used. Other terms from the late 20th century include GBAD (Ground Based Air Defence) with related terms such as SHORAD (Short Range AD) and MANPADS (Man Portable AD Systems). Non-English terms for air defence include the German Flak (FliegerabwehrKanone), and the Russian term Protivovozdushnaya oborona, a literal translation of ‘anti-air defence’, abbreviated as PVO. In Russian, the AA systems are called zenitnye (i.e, pointing to zenith). In French, air defence is called DCA (Defense Contre les Aeronefs), being the generic term for all kind of airborne devices.

At the end of World War II, the anti-aircraft regiments in India exceeded the number of Field Regiments. The Burma Campaign had given the British early lessons in air power and the requirement to counter it for successful ground offensive. In doing so, they raised almost 66 light and heavy anti-aircraft regiments during the war.

However, on the eve of independence only four of these remained. Two went to Pakistan and two were retained in India. Ever since, the Army Air Defence has seen a slow pace of development except in the years immediately after the 1965 and 1971 wars which saw complete participation of the air forces unlike in the 1962 and the Kargil War.

However, the changing air threat scenario from manned to unmanned given the recent conflicts like Azerbaijan-Armenia, Israel-Palestine as well as the US attacks on the oil field in the Middle East have again shifted the focus to the importance of air defence. The article chronicles one of Indian Army’s oldest air defence units—129 Air Defence Regiment, also referred to as The Sabre Killers. The 129 Air Defence Regiment was raised as 143 Heavy Artillery Regiment (Territorial Army) on 15 August 1951 at Deolali. The Regiment was then equipped with 7.2 howitzer guns. The Regiment was re-designated as 129 Light Anti-Aircraft Regiment (TA) on 15 December 1956. Upon conversion, the Regiment was equipped with 40mm L/60 Bofors Gun.

The Regiment participated in both 1965 and 1971 India-Pakistan War on the Western Front. Pakistan Air Force (PAF) received its first B-57 bombers when 24 B-57Bs and two B-57Cs from the deactivated 345th Tac Bomber Group of the US Air Force were ferried to Mauripur Air Base in Karachi, Pakistan in 1959. These were used to raise the 7th and 8th Bomber Squadrons of the 31st Bomber Wing.

During the 1965 war, PAF B-57s flew a total of 167 sorties, dropping over 600 tons of bombs. Pakistan lost three B-57s and one RB-57F electronic intelligence aircraft in action over the course of the 22-day war. The first B-57 was lost on September 6 over Jamnagar. The official account claims that the aircraft crashed due to spatial disorientation and bad weather as the crew was fatigued. The PAF then refused to acknowledge that the B-57 was shot down by the AAA. It was only after 40 years that the PAF accepted that the loss of B-57 was due to AAA. The AD Regiment deployed at Jamnagar was 129 AD Regiment (TA). This was not only the first PAF B-57 shot down during the war but also the very first PAF aircraft ever shot down by a TA Regiment. Sadly, in the official records, the Regiment never got the credit for the same. 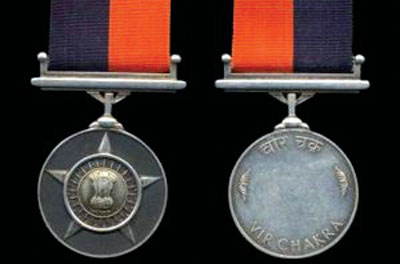 The Regiment performed exceedingly well in the 1971 war and was awarded two Vir Chakra for shooting down enemy aircraft, the F-104 Star Fighter at Dwarka on 9 December 1971, and the F-86 Sabre Jet on 5 December 1971 at Okha. That’s how the Regiment earned the sobriquet ‘The Sabre Killers’. In August 1975, the Regiment was reorganised into a regular army unit and re-designated as 129 Air Defence Regiment.

In 1984, the Regiment was located in Punjab and heavily committed in internal security after Operation Bluestar. The regiment was also mobilised for Operation Trident in 1987. The regiment was deployed in the infantry role along the Line of Control in Jammu and Kashmir in 1994-95 under Operation Rakshak. During the 1999 Kargil war, the regiment was deployed to provide AD protection to various vulnerable areas in the northern theatre. The Regiment earned its third Vir Chakra during the Kargil War, during which Major (later Col) G.S. Khot of the Regiment while serving with the army aviation was awarded the third highest gallantry award in the face of the enemy for carrying out casualty evacuation and air maintenance sorties amidst heavy shelling. In 2006, the Regiment moved to the western theatre as part of the strike formation.

In 2015, the Regiment undertook an adventure activity at national level including a 12-day mountain trekking expedition in Uttarakhand. In 2016, the Regiment was deployed in Jammu and Kashmir and was involved in handling of internal security situation post the abrogation of Article 370. Since its raising, the regiment has earned one GOC-in-C Unit Citation, three DGAAD Unit Appreciations, 14 COAS Commendation Cards, four VCOAS Commendation Cards and 56 GOC-in-C Commendation Cards. The Regiment celebrated its Diamond Jubilee (60th Raising Day) on 15 December 2011. 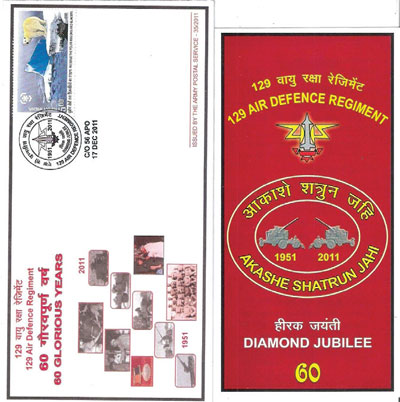