A daughter’s recreation of her father’s courage and dare-devilry. An extract 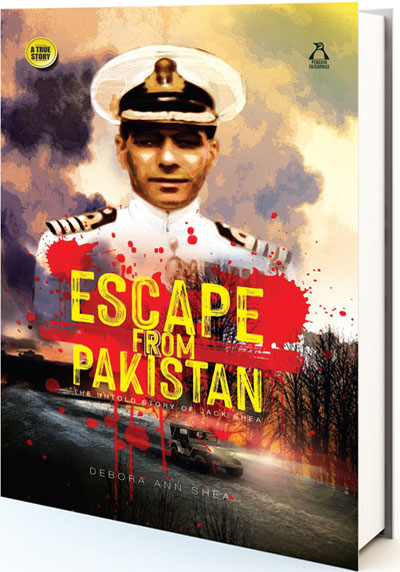 The mission was ‘go-go’, but Jack’s military training in ops told him that a decoy plan would have to be put into place. An idea was already brewing in his mind.

The Indian High Commission sent a courier with confidential mail to the Ministry of External Affairs every week. The mail was secured in a briefcase, cuffed to the wrist of the courier. They were accompanied by two security personnel to the airport and received also by two security personnel when they arrived in India. The keys for the cuff were with the Deputy High Commissioner in Karachi and the Secretary to the Minister in India.

This flight could be the ideal camouflage for Frank’s escape plan.

He spoke to Amar, who listened to the plan with keen attention.

‘We can make a provisional reservation for Frank so that his name pops up on the passenger manifest. The Pakistani agencies will be tipped off by the Airline. When they rush to apprehend him at the airport, they will find that only our courier guy has shown up for the flight. Meanwhile, Frank will have left Karachi far behind.’

‘Superb, Jack! Said Amar. ‘I’ll have the reservations done before the airline office closes for the day. I’ll also speak to Puri; he’s taking the courier to Delhi this week.’

It was past 10.00 p.m. All the planning and arranging had left them exhausted. It was decided that Frank would spend the night at the High Commission, and the others would go home. As the High Commissioner left, Jack made eye contact with Prabhjyot, who was driving the car and gave him a thumbs-up, signaling that he was the man of the moment and must live by his promise. Prabhjyot flashed back a smile of reassurance at Jack and sped away.

They took care to maintain the appearance of routine work at the High Commission next day. Of course, each one of them knew and were waiting with bated breath for the night, when the mission would officially begin. At 7.00 p.m., all the staffers left the office, except Jack and Dewars. Prabhjyot dropped the High Commissioner home and returned to the office. All he had to do now was wait until it was time to reach the pickup point indicated by Jack.

Frank had a light meal at 8.00 p.m. and went to bed to catch a few winks before the post-midnight departure. At 1:30 a.m., Jack made himself a cup of coffee and went up to the room in which Frank was resting. He knocked gently on the door. Frank opened at once.

‘Yes Jack, let me make sure I have everything.’

Frank had a stoic clam about him as he quickly checked and gathered his belongings for the journey, most importantly his identity papers and the letter from the High Commissioner stating that he was an Indian citizen and had to be accorded protection.

Soon after, they both walked to the garage where the cars were parked. Jack advised Frank to crouch down between the back seat and the front seat of his car and covered him with a blanket. He took the driver’s seat, turned the ignition on and drove the car towards the exit gate of the High Commission. The lone guard who was manning the gate opened it, too sleepy to carry out the usual identity checks.

Jack drove carefully, checking his rear-view mirror to detect anyone following. After driving around for about half an hour, he turned towards Karachi’s famous Sadar Bazaar.

Even at 2.00 am. Sadar Bazaar was abuzz with the street vendors dishing up sheekh kabab and roti, a popular delicacy.

Jack parked the car in a small, dark by-lane, He asked Frank to remove the blanket. As decided, they got out of the car and began walking at a suitable distance from each other, with Frank in the lead and Jack following him a couple of paces behind. Soon, they spotted the Willy’s jeep.

Prabhjyot, much like the local labourers, was sitting on his haunches some distance from the jeep. He spotted Frank and Jack and sauntered towards the vehicle. He was well cast into his new character, behaving nonchalantly yet cautiously.

He quickly settled himself into the driver’s seat, adjusted the cushion and his posture and turned the key into the ignition.

The engine sputtered in the cold of the night, and Prabhjyot pressed the accelerator gently, like a champion horse rider nudging his horse to get the best out of him. The engine warmed up to a steady hum. Meanwhile, Frank got into the seat next to him. The enigmatic smile on Prabhjyot’s face assured Jack that the man and his machine were well up to the task and would not fail them. He smiled and sent out a silent prayer as he waved goodbye to Frank and Prabhjyot.

Jack turned and crossed the road. He walked casually to his car, without once glancing back at the departing jeep. He waited for some time before he approached the car, just to be sure it was not being watched. A few minutes later, he unlocked the car and drove quietly without switching on the headlights until he hit the main road towards Hindustan Court.

Jack did not want to be seen or logged in by the sentry at the gate, so he drove to the rear of the compound and parked the car in the shadowy recesses of the trees. His athletic frame and agility came to good use as he scrambled up the compound wall. He entered the house quietly from the rear door.

Dorothy, awakened by the click of the door, noticed Jack getting into bed and turned over to face him. He put his arm around her and dozed off due to sheer exhaustion. It was 4.00 a.m.