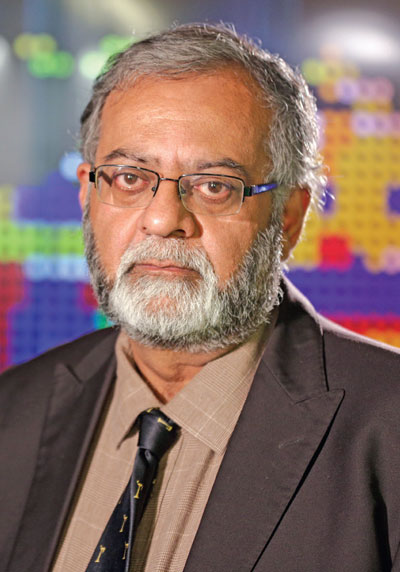 What research methods did you employ while writing the book?

A lot of the research has happened over various other projects as well. I did the History of the Air Force in 1992 which was funded by JRD Tata. While making films I had done a lot of research and it’s a continuous process.

But when I started on the 1965 book, the first thing I did was to visit some of the places where the action took place. I first went to the Rann of Kutch in India’s Gujarat, and got across the Sardar Post from where one can see Kanjarkot that is now in Pakistan. Once you see the terrain, half your job is done. It’s almost as if the ground speaks to you. The lie of the land, the geography, the slopes, the flow of the rivers–everything starts making sense then.

Additionally, I have also grown up in a lot of these areas. My father commanded the Tiger Division in Jammu, which was a key player during the war. I have also lived in Jalandhar in the mid-1980s and am very familiar with the Mand area and the Bari Doab, which in Punjab they call the area between two rivers—in this case, the Beas and Ravi, which is actually the Amritsar-Lahore sector, and the Rachna Doab in Sialkot sector. Kashmir too I know well because of all my earlier professional engagements in the area. Rajasthan’s Barmer sector was also among the areas I visited to get a feel of it.

I also did a few fighter sorties from Jaisalmer and Uttar Lai which further familiarised me with the terrain. I spoke to a few people selectively and was mindful of not speaking to too many. Somehow, individual stories can be distracting, as people tend to tell the story from their point of view and at the end of the day, they will also be very disappointed because they will expect one to include all that they have said. People also tend to speak about past events while keeping themselves at the centre of the incident. As a military historian one has to shove all that aside and look at the larger picture by studying the map and terrain and then figure out for yourself what could have happened.

Why was writing on the war of 1965 important for you?

It was important in the overall chronology of events because we started with ‘1962: The War that Wasn’t’. Aleph is a mainstream publisher and one of the biggest brands in the country. Until now most military history books had been published by specialists like Lancer, Manohar and Natraj Publishers plus a few others. It was David Davidar of Aleph who came up with this idea of documenting military history chronologically, which started with 1962: The War that Wasn’t and went on to 1965: A Western Sunrise books. The project also includes the wars that took place in 1947–1948 and 1971. We may also include the Kargil War in this project but that’s yet to be decided.

Coming back to the 1965 book, I felt that this war previously hadn’t been documented in great detail. For instance, there is a lot of literature around the armoured battles but way little around the infantry action that took place in the same sectors. If you dig into the unit histories, you will find it, but I am talking about the national level. It was a very fascinating book to write because this is the most complex war of all the wars fought by India.

As a child in 1965, what are your starkest memories of the war, having experienced it closely?

I was five years old. My father was part of the 23 Infantry Division which was a reserve division and they were deploying in the Sialkot Sector just when the ceasefire was called. So his battalion, 18 Rajput, did come under a bit of shelling but they didn’t actually participate in the war as such. A few days before the cease-fire, he suddenly arrived at night in a jeep, with a driver because the battalion was moving past Ambala. From there he came to Dehradun and I was busy digging a trench for myself. He came and spent two-three hours and left. When he was leaving, I remember he was describing the church in Ambala that was burning when he went past. The Pakistanis had come and bombed the Ambala airfield and the bombs had bounced and skipped and hit the church. While this is one of the starkest memories I have, I also have a lot of other memories of troops moving, people going, and a lot of my uncles coming back and some not coming back.

What do you think about the military literature being produced in the country today? Do you think we need improvement in this area?

As a military historian, I definitely welcome more writing on the subject. There’s so much more to be written in this area. What we have today is only a scratch on the surface. When it comes to the quality of writing, the prose was better in books such as ‘The Himalayan Blunder’ written by John Dalvi, as well as in books written on the 1947-48 fighting like Slender Was the Thread written by Bogey Sen. So, while quality of writing was never an issue, we have a larger number of writers today who are coming forth. They are not necessarily from the armed forces. That’s a big advantage because when one is from the armed forces, even after retirement, service officers remain conscious about what they say. Hopefully, things are changing. With more high-quality work being put up on the bookshelves, the fly-by-night publishers, who are producing some pretty shoddy work at the moment, will either have to up the ante and improve if they really aim at making an impact or eventually ship out.

How do you breach the barriers that the military and defence establishments have created while working on exhaustive topics such as military history, given the kind of secrecy that is prevalent in these establishments?

There’s no template for writing military history. One really has to train oneself for it. In the process of writing, the more the writer speaks to people, the more they will realise that each man is telling the story from his perspective and that becomes a challenge. When it really comes to acquiring information from the forces themselves, I feel the armed forces need to open up. Especially after the trouble with China in Eastern Ladakh, I feel the forces have become even more wary of sharing information. But the military establishment should really look inwards because all that you are trying to project is for them. Ultimately, one just has to keep at it.

In the book you mention the ‘emotional ordeal of having written 1962: The War that wasn’t.’ What was it about the book and its process that made you go through it?

My father was from 2 Rajput, which took the brunt of the attack on the Nam Ka Chu river. In one-and-a-half hours of fighting, we lost 282 men and the battalion was virtually wiped out, with those who survived were either taken captive or injured. One grew up in a family where all these things were very real. People all around us had died. One carried that baggage. So when one wrote the book, it was a very emotionally trying period because one used to sometimes just sit and cry at times. The book took me a lot of time to write, but it also drained me to a huge extent. In the case of the 1965 book. It has taken me about two-and-half years.

Tell us about your experience while writing ‘1965: A Western Sunrise’ and what it means for you.

I have flown a lot with the air force and have had the opportunity to even fly in aircraft that were used during the 1965 war–Canberras, Hunters and Gnats. I have flown in the first two and in Gnat I have done a few enactments. So, I knew quite a lot from the air force’s perspective. But having said that, when we shot the J.R.D Tata-sponsored film, Salt of Earth, a history of the IAF in 1992, we completely forgot to include the Flt Lt Alfred Tyrone Cooke action altogether which had happened in the eastern sector. I really couldn’t believe it when the details of Cooke’s actions began to emerge later thanks to my good friends Samir Chopra, PV Jagan Mohan and Air Marshal Bharat Kumar who did yeoman service in documenting the history of the IAF subsequently. To an extent that is perhaps the reason why I have made Cooke’s dogfight over Kalaikunda as the preface of the book. I think the country should really look at upgrading Cooke’s VrC to a PVC.

What are your upcoming projects?

I am supposed to start work on ‘1947-1948’ and ‘1971’. The latter was supposed to come first, but I haven’t taken a final call on it. There are other books also coming, which are not necessarily based on military history. I am now working with Pankaj P. Singh who heads BluOne Ink on developing an Alternate Education programme for schools that includes illustrated books on the Northeast, Indian Wildlife, Ladakh (with Latika Nath), South India and even an Illustrated Military History of India. This is a very progressive group of people, and we are looking at various ways to reach out to people not only in India, but also across the world.

We are also looking to launch a comic series on the lines of the Commando Comics that played such a pivotal role in familiarizing people with the Great Wars. Then of course, there is the ongoing Military History Seminars that I am helping Welham Boys with for the last five years. We have an excellent team of people there–Mr Darshan Singh, the chairman of Welham who has initiated this seminal move, continues to guide it while Mrs Sangeeta Kain, Maj General Jagatbir Singh and Ms Sana Durrani are key players in what has already become a major calendar event for leading schools in India. We continue to try and reach out more and more to a wider audience.