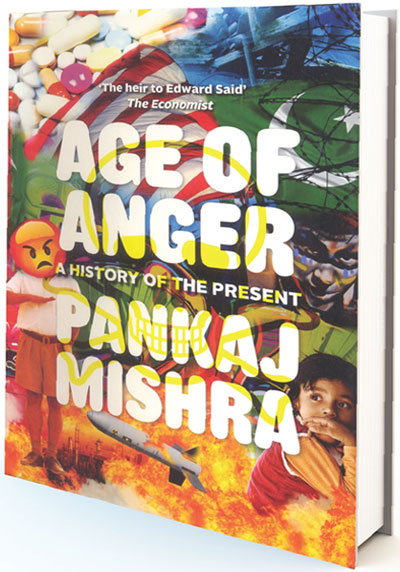 The most important of these Indian exceptionalists now seems to be Savarkar, the chief theorizer of Hindutva, whose intellectual spurs were almost all European. He was born in 1883 in the western Indian city of Nasik, into a Brahmin family that not long after his birth fell into financial difficulties. In 1902, Savarkar agreed to marry the daughter of a family friend on the condition that his father-in-law would pay for his education at Fergusson College in Pune. He first read Herbert Spencer in Pune and was enthralled by his vision of struggle. At the age of twenty-three Savarkar went to England on a scholarship set up by one of the English writer’s devoted Indian students. He spent the next four years in a daze of Mazzini worship.

A true disciple of the Italian nationalist, Savarkar abhorred conventional religion while embracing a secular notion of salvation. But, conforming to a general pattern of escalation, he went much further than his hero in making Hindu nationalism an ideology of hate and violent revenge. In this he had learned the lessons of Wagner’s Germany most effectively: ‘Nothing makes the Self conscious of itself’ Savarkar wrote, ‘so much as a conflict with [the] non-self. Nothing can weld peoples into a nation and nations into a state as the pressure of a common foe. Hatred separates as well as unites.’

The pathological hatred of foreigners that overcame Heinrich von Kleist also drove Savarkar. He lamented the ‘suicidal ideas about chivalry to women’ that prevented Hindu warriors of the past from raping Muslim women. (Savarkar’s emotional impairment is confirmed by his virtual silence about his marriage and family life in his autobiographical writings.) In his book on the Indian Mutiny in 1857, he carefully described European women and children being slaughtered by Indians during the risings. ‘A sea of white blood spread all over… body parts floated in it.’ He concluded the description of each atrocity with a gleefully specific reference to the historical injury thereby avenged.

Violence for Savarkar always seems to have been a form of emancipation. He relates in his autobiography how as a twelve-year-old boy he led a gang of schoolmates to vandalize his village mosque ‘to our heart’s content’. In his world view, revenge and retribution were essential to establishing racial and national parity and dignity. But the Hindus needed to have proper enemies against which to measure their manly selves.

To this end, Savarkar built a lurid narrative of Muslims humiliating Hindus; but he also played up Muslims’ ‘fierce unity of faith, that social cohesion and valorous fervour which made them as a body so irresistible’. He gushed enviously about the Prophet and the world dissemination of Islam through a deft use of the ‘sword’. His praise of Muslims, duty-bound to ‘reduce all the world to a sense of obedience to theocracy, an Empire under the direct supervision of God’, stressed all the qualities that he thought overly philosophical and politically fractious Hindus sorely lacked.

The Hindu self, in other words, needed to learn from the Muslim non-self. Indians had to abandon values like ‘humility, self-surrender and forgiveness’ and nurture ‘sturdy habits of hatred, retaliation, vindictiveness’. Indians had been misled by their metaphysical and religious traditions, such as Buddhism, which could not compete with the ‘fire and sword’ of India’s invaders. Moreover, they had to learn from the modern Europeans, who had defanged Islamic civilization, in another twist in the cycle of civilizations. Echoing Herzl’s notion of ‘Darwinian mimicry’, Savarkar hoped for Hindus to adapt themselves to, and then rise in, a world that was ‘red in tooth and claw’.

Trying to work up hatred as a categorical imperative, Savarkar found Gandhi’s non-violence ‘sinful’. Much of his life was defined by his antipathy to Gandhi, a ‘crazy lunatic’, as he put it, who ‘happens to babble… [about] compassion, forgiveness.’ The two men knew each other in London early in their careers, and there was some talk of working on the common cause of Indian freedom. In 1906 they met at a lodging house for Indian students and aspiring revolutionaries in Highgate. In one account of their encounter, Savarkar, who was frying prawns, offered them to Gandhi. When Gandhi, a vegetarian, refused, Savarkar allegedly said that only a fool would attempt to fight the British Empire without being fortified by animal protein.

Savarkar and Gandhi’s paths diverged sharply after 1909. Savarkar was arrested in 1910 for his involvement in the murder of a British official in India, and condemned to fifty years in prison. After just two months at a draconian prison in the Andaman Islands in the Indian Ocean, he was writing mercy petitions to the British — an exercise in abject self-cancellation that came to light many decades later.

In one such supplication, Savarkar described himself as a ‘prodigal son’ knocking on ‘parental doors of the government’. He promised to be the staunchest advocate of constitutional progress and loyalty to the English government’ and to ‘bring back all those misled young men in India and abroad who were once looking up to me as their guide’.


As the First world war broke out, he wrote ‘I most humbly beg to offer myself as a volunteer to do any service in the present war, that the Indian government think fit to demand from me.’ Savarkar was denied his moment on the battlefield (unlike his Zionist coeval Jabotinsky, who helped found the Jewish Legion, and fought with the British during their fateful conquest of Palestine in 1917). Nevertheless, he seems to have got a vicarious ‘thrill of delight in my heart’ on hearing of Indian soldiers participating in the slaughter of the First World War: ‘Thank God! Manliness after all in not dead yet in the land.’ He pointed to the common dangers to Hindus and Christians of Turko-Afghan hordes to the north of India, writing that ‘every intelligent lover of India would heartily and loyally cooperate with the British people in the interest of India herself’. The British eventually commuted his sentence after fewer than fourteen years in prison. But they also forced Savarkar to cease his anti-imperialist activities. Interned in a small western Indian town, he was left to define the Hindu self in opposition to what it was not.

Savarkar became president of a party called the Hindu Mahasabha in 1937, and busied himself with reconverting non-Hindus to Hinduism. He again offered his co-operation to the British as the latter imprisoned Gandhi in 1942. ‘The essential thing’, he said, ‘is for Hinduism and Great Britain to be friends and the old antagonism was no longer necessary’. Lacking a mass base, Hindu nationalist leaders had from the 1920s onwards opposed Gandhi and courted the British in an attempt to bring an anti-Muslim Hindu nationalism into Indian politics through the back door.

Savarkar himself supported Hitler’s anti-Jewish policy, identifying it as a solution for the Muslim problem in India: ‘A Nation is formed’, he wrote in 1938, ‘by a majority living therein. What did the Jews do in Germany? They being in minority were driven out from Germany’. Admiration for Nazi Germany was widely shared among Hindu nationalists at the end of the 1930s. In his manifesto ‘We, or Our Nationhood Defined’ (1939), Madhav Sadashiv Golwalkar, supreme director of the RSS from 1940 to 1973, asserted that India was Hindustan, a land of Hindus where Jews and Parsis were ‘guests’ and Muslims and Christians ‘invaders’. Golwalkar was clear about what he expected the guests and invaders to do:

The foreign races in Hindustan must either adopt the Hindu culture and language, must learn to respect and hold in reverence Hindu religion, must entertain no ideas but those of glorification of the Hindu race and culture… or may stay in the country, wholly subordinated to the Hindu nation, claiming nothing, deserving no privileges.

Savarkar was arrested the same day, 30 January 1948, that his most fervent admirer in his party, Nathuram Godse, murdered Gandhi. During his trial, Godse made a long and eloquent speech reprising Savarkar’s themes: he was disappointed to find that his hero, eager not to return to jail, ignored him coldly in the courthouse and prison.

Savarkar himself was acquitted of the conspiracy to murder Gandhi, though Vallabhbhai Patel, India’s first home minister and no mean Hindu nationalist himself, was convinced by his intelligence sources that ‘a fanatical wing of the Hindu Mahasabha directly under Savarkar’ created the conspiracy to kill Gandhi and ‘saw it through’. An official commission of inquiry into Gandhi’s death, in the late 1960s, drew on testimony unavailable at the original trial to find Savarkar guilty of leading the conspiracy.

Failure to catch up with ‘advanced’ countries and gain international eminence has now replicated in India, after many other countries, the fantasy of a strongman who will heal old injuries and achieve closure by forcing the world to recognize Indian power and glory. The self-chosen mission of middle class Hindus for India’s regeneration is tuned to the highest pitch. Back in the 1960s, Naipaul was scornful of their ‘apocalyptic’ language. Today, the bizarre lurching between victimhood and chauvinism that he noticed has an ominous geopolitical dimension as India appears to rise (and simultaneously fall), and many ambitious Indians feel more frustrated in their demand for higher status from white Westerners.

For more than two decades the apocalyptic Indian imaginations has been enriched by such Hindu nationalist exploits as the destruction in 1992 of the sixteenth-century Babri mosque and the nuclear tests in 1998. Celebrating the latter in a speech titled ‘Ek Aur Mahabharata’ (‘One more Mahabharata’), the head of the RSS claimed that Hindus, an ‘extremely intelligent and talented’ people who had thus far lacked proper weapons, were now sure to prevail in the forthcoming epic showdown with ‘demonic anti-Hindus’ (a broad category that includes Americans, apparently the most ‘inhuman’ people on earth).

Until this cosmic battle erupts, and India knows true splendour, Hindu nationalists discharge their world-historical responsibilities to Bharat Mata in the only way they can: by attacking various alien and hostile powers that stand in their way, such as cosmopolitan intellectuals and Muslims with transnational loyalties. In the anti-Muslim program super-vised by Prime Minister Narendra Modi in Gujarat in 2002, a fanatic called Babu Bajrangi seemed to have fulfilled Savarkar’s fantasy of mutilating foreign bodies: he claimed to have slashed open with his sword the womb of a pregnant woman while leading a mob assault on a Muslim district that killed nearly a hundred people. He also crowed to a journalist in 2007 that Modi sheltered him repeatedly. Eventually sentenced in 2012 to life imprisonment, Bajrangi has spent, since Modi’s ascent to power in 2014, most of his time outside prison.

Meanwhile, Modi stokes Savarkar’s shame and rage over more than a ‘thousand years of slavery’ under Muslim and British rule. Even Naipaul, celebrated for his destruction of Third Worldist illusions, succumbed to the pathology of mimic machismo he had once feared and despised. He hailed the vandalizing by a Hindu mob of a medieval mosque in 1992, which triggered nationwide massacres of Muslims, as the sign of an overdue national ‘awakening’. As though trying to transcend his ‘savourless’ and ‘mean’ life in England, Naipaul also endorsed the Ossian-ish history peddled by Hindu nationalists.

AGE OF ANGER: THE HISTORY OF THE PRESENT
By Pankaj Mishra, Juggernaut, Pg 346, Rs 699