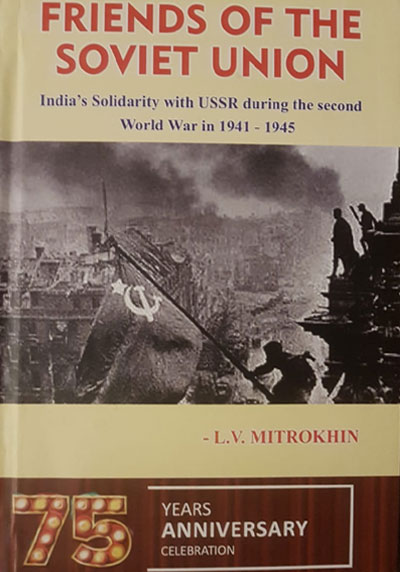 In 1943, despite the fact that many prominent leaders if the Friends of Soviet Union movement were in prison for taking part in the famous Quit India movement, new organisations of the FSU appeared all over the country.

In October Revolution State Archives of the USSR, in Moscow, there is a letter sent to Moscow by D.P. Dhar (who later on became the Ambassador of Independent India to the USSR). On Friends of the Soviet Union letterhead, D.P. Dhar wrote:
Srinagar, 30 September 1943

Those days in Kashmir are remembered by Mr Motilal Misri, one of the founders of the Friends of Soviet Union in Kashmir in 1943 while still a student. According to him, “the first committee to function as a branch of the All-India Friends of the Soviet Union (FSU) was formed in 1942-43. Among the sponsors were eminent personalities like the late G.M. Sadiq, Ghulam Mohiuddin Kara, then a prominent leader of the National Conference, the late D.P. Dhar, the late Justice Jia Lal Kilam (then a leading advocate and an intellectual of high calibre), N.N. Raina (now Head of the Department of Physics, Kashmir University) and many others. It was during that period that the National Conference adopted a resolution at its Mirpur session characterising the Second World War as a people’s war after Hitler’s hordes had launched their attack against the bastion of socialism. The resolution said clearly that the USSR was the first socialist state and the defensive war it was fighting against the dark forces of fascism was a just war which all democrats must support… There was not the slightest wobbling, equivocation or ambiguity regarding the character of the war which was thrust on the USSR by fascism. The people’s movement in the state stood firmly for the triumph of the USSR and its Red Army. The rout of fascism and the victory of the glorious Red Army in the war served as a source of fresh inspiration to the Kashmiri people in their struggle against autocratic rule.

“…In 1945, at the Sopore session of the National Conference, two main resolutions were passed – one on the adoption of the New Kashmir programme, and another sending warm and fraternal greetings to the Red Army for its heroic role in the war.’

“The New Kashmir programme was formulated and drafted after consulting the constitutions of Uzbekistan, Tajikistan, and Kazakhstan. The programme envisaged the building of a socialist society free from all forms of exploitation of man by man. In the introduction to New Kashmir, Sheikh Mohammed Abdullah, as President of the National Conference, said that the October Revolution and the establishment of the USSR had blazed the path for humanity. This was an example, he added, of what man could achieve, and was worthy of emulation. He also said that all exploitation had been ended in the USSR; there was an identity of aims and ideals between the people’s movement in the state and the Soviet power.’

“The main slogan that emerged at the Sopore was Land to the Tiller. One of the first decrees of Soviet power signed by Lenin also related to the question of the distribution of land to the tillers and the abolition of parasitic landlordism. Almost the entire peasantry in the state rallied behind the slogan. Jawaharlal Nehru, Khan Abdul Ghaffar Khan, Khan Samad Khan of Baluchistan, and other prominent leaders also attended the session. The democratic movement in the state had already become part of the mainstream of the anti-imperialist, national-liberation struggle of the Indian people.’

“…After the end of feudal autocracy and the formation of a popular government, many measures contained in the New Kashmir programme were implemented. These include the abolition of landlordism without compensation, eradication of usury system, etc.”


Years later, on the eve of his departure for the USSR for his second terms as India’s Ambassador, D.P. Dhar received with much pleasure (from the author) the photostat copy of the letter he wrote to Moscow in 1943. Unfortunately, he did not live long after his second term in Moscow, but all his life was devoted to strengthening the bonds of friendship between the two great peoples. Deeply mourning his sudden and untimely demise, as a vice-president of ISCUS (Indo-Soviet Cultural Society), the ISCUS expressed the view that “in his death, the nation lost an outstanding personality, a patriot, an able diplomat and a true and sincere friend of the Soviet Union, and the ISCUS its leaders…”

To get back to our story of development of the Friends of the Soviet Union Movement, the travel notes of agronomist, entomologist A.A. Kostylev (accompanied by a colleague) on his journey to India at that time (1943) records the enthusiasm and sincerity with which the people of India received those early representatives of the Soviet people. At a reception in Indore, the Society of the Friends of the Soviet Union presented the Soviet scholars with a red banner to be handed over to the heroes of the battle of Stalingrad. The banner was later taken to Kabul and handed over to the Soviet Ambassador Mikhailov to send it to the People’s Commissariat for Foreign Affairs of the USSR.

More than 30 years have passed since then, but one of the participants at that reception, Mr M.G. Vaidya, general secretary of the Madhya Pradesh ISCUS, recalls the occasion vividly. He says: “Those were exciting days: June 1941, when the troops of Hitlerite Germany had penetrated deep into Soviet territory. The unprovoked aggression shocked the conscience of the entire Indian people and young Narendra Sharma was inspired to write a brilliant and stirring poem, which appeared in Hansa, a progressive Hindi magazine, published from Banaras, hailing the Red Army as the harbinger of the new age.”