Culturally in our army, intellectual pursuits are frowned upon and focus is entirely on training and regimentation 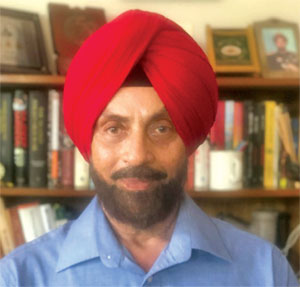 You retired many years ago but started writing only recently. What drove you to writing?

After retiring from the army on 31 December 2008, I was appointed as a member of the Armed Forces Tribunal in June 2009. Being a virtual judge adjudicating on service and legal matters related to military personnel, I thought it would be inappropriate for me to write on military affairs. Once I retired from the tribunal on 4 December 2013, I felt that I must share my experience to contribute towards strategic and military thought in India, and public debate with respect to national security and military reforms. In my view, only public debate can force a reluctant government and a status-quoist military to reform.

To begin with, I utilised the Twitter to highlight the urgent need for reforms and then graduated to writing for various newspapers and online news portals with effect from 2014. Deification of the armed forces and identifying them with neo-nationalism was leading to stifling of reforms and creating a myth of military prowess. Hence, I also took it upon myself to ethically assess the capabilities and performance of the armed forces to highlight the weaknesses and shortcomings to force reforms. A selection of my articles has now been published in a book Indian Army: Reminiscences, Reforms and Romance.

You have expressed yourself on a range of subjects, from morale of the armed forces and war-preparedness to politicisation of the military. What issues are closest to your heart?

In my view, the most important issue is reforms with respect to national security and the armed forces. In India no white paper on national security has ever been issued by the government. India does not have formal National Security Strategy. The basic structure and organisations of the armed forces have only seen incremental reforms and are not compatible for the conflicts of 21st century. Nothing proves the point better than the crisis in eastern Ladakh, a crisis we neither visualised nor have the desired capability to deal with.

The second issue close to my heart is leadership standards of the officer corps. Good but not good enough, is how I assess the standard. Our Leadership Development Programme needs to be revamped. Fundamentals of leadership remain constant but the approach to development and application has not kept pace with the environment of the 21st century. Intellectual military education is below expectations and there is a marked dilution of military character and values, particularly with respect to integrity, fitness, bearing, moral courage and will/ initiative. The reason is the flawed leadership development programme at the military academies and the failure to bridge the gap between human failings and organisational ideals through enforcement of rules, regulations and military law due to lack of moral courage. Higher leadership does not lead by example.

The third issue is identification of the armed forces with neo nationalism. The military has been sucked into every facet of national life. There is rampant political exploitation. While the military still remains apolitical but the hierarchy is showing signs of tilting with the wind and tending to tailor its professional advice. On 3 May 2020, while the PLA was poised to pre-empt us to seize our territory, the armed forces were busy organising spectacles to celebrate the ‘Covid Warriors’. A laudable action indeed but missed the enemy at the gates!


You have been among the few military officers who have been extremely vocal and forthright about China’s aggression. Given that the highways connecting Ladakh to mainland India—Manali-Leh and Srinagar-Leh—are likely to close in two and three months’ time and the stalemate remains, what is the way forward for India?

India was politically and militarily surprised at both the strategic and the tactical level. China’s actions on the ground were tactical, but the intent was strategic in nature to cut India down to size as political/ economic/ military competitor and foreclose the development of border infrastructure in areas that pose a threat, howsoever remote it may seem, to Aksai Chin and other areas under Chinese control.

China, so far, has shown no inclination to give up the strategic advantage it has gained and fear of a setback/escalation to deal with which we lack the military capability for, has forced us on the defensive to prevent further loss of territory. Domestic perception is being managed through denial and obfuscation and we are desperately seeking a diplomatic solution to restore status quo ante April 2020.

In my view, status quo is likely to continue and we will be forced to man the Line of Actual Control (LAC) like the Line of Control (LC), at least in eastern Ladakh. We have no option but to maintain the additional forces inducted permanently in Ladakh. Logistically it is doable but at a great cost. If at all there is a diplomatic breakthrough, at best we can hope for is a new normal with large buffer zones in our territory where no patrolling, deployment of troops or development of infrastructure will be carried out.

Lack of reading is one of the factors linked with poor appreciation of changed warfare amongst the present-day Indian military officers. How widespread is this and what is the reason for the loss of the reading habit?

There is a fundamental difference between military education and training; the former deals with ‘why’ of matter military and the latter with ‘how’. Without the background of the former, the latter hangs in mid-air and is rudderless. Hence, in application we tend to focus on the tactical level in isolation. The main reason for this is graduated approach to intellectual military education.

While experience does lead to better perception, how can intellectual education be linked to age and length of service? I find no reason as to why a foundation course on ‘Evolution and Theory of War’ at the military academies should not empower the officers with what they struggle to learn years later at the staff college, higher command course and at the national defence college.

Culturally in our army, intellectual pursuits are frowned upon and focus is entirely on training and regimentation. Intellectual empowerment is entirely left to the officer. By the time he understands the need to read and have wider understanding of matters military, it is either too late or at best becomes a struggle. It is hard to imagine, that an Army Chief known for his intellectual prowess, in the mid-Nineties removed military history as a subject for the staff college entrance examination—the only competitive examination in the army. Its restoration a decade later faced very stiff opposition.

I used to tell the officers to read 20 pages a day which means two 300-page books per month or 100 books in four years. The number of officers who have read 100 books apart from military manuals, in our army can be counted on our fingertips. The armed forces need to redress this issue.

If you were to hold a special interactive session with young military officers, what advice would you give them?

Military character traits are absolute and cannot be compromised. Empower yourself with wider military education and pursue excellence by training your command. Do read Anders Ericsson’s 10,000 hours concept. 10,000 hours of work beyond routine tasks will give you a quantum leap. You have to repeat this cycle every 10 years.

Always have a vision and lay down objectives for yourself and your command. Lead from the front and be a role model. Your troops at every level of command watch every step you take. If you do not walk the talk you lose the moral authority to command and you will only command by the weight of rank.

The armed forces require men of action. Action requires intellect driven planning and decision, directions/ orders and execution. All three are governed by will which is rooted in character. Will without intellect is dangerous but intellect without will is useless. Develop the ethos of action i.e., to decide and initiate action to accomplish the assigned or derived mission based on higher intent.

Unlike say, the US, why is that fewer retired military officers in India write professional military books, other than military history?

Good verbal and written communication skills are the essence of military character. However, military style of writing is cryptic, authoritarian and focuses on the target audience—military personnel. Common people find conventional military writing dull, boring and too complex. Military personnel have little or no idea of public communications or functioning of the media.

In my view, the reluctance to write post-retirement stems from fear of the unknown and lack of opportunity. Even those who have a flair for writing, tend to seek the comfort of think tanks and defence journals. However, the trend is changing. In the last few years the public has evinced a lot of interest in matters military and wants to hear it from the ‘horse’s mouth’—veterans.

Today, we see a fair number of veterans writing books and articles for the media. A course in public communications and a little encouragement from the editors and publishers should see many more veterans joining the fray.