That the Chinese are a threat on Indian Ocean is a fact that common Indians are not aware of. Therefore, the need to educate them about this. The encirclement theory is something I believe in, therefore the ‘strings in a pearl’ theory of the Chinese is a reality in my opinion. 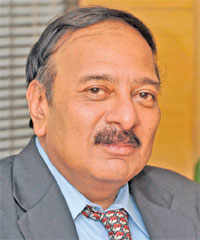 Since Chinese President Xi Jinping announced his ambitious Belt and Road Initiative (BRI), several books and research papers have come out on the subject. What drove you to write on this subject?

Let me give a longer answer to your question: why I wrote this book. I wrote this book because of my intense interest in this subject albeit from a non-professional angle. Non-professional because neither have I specialised in military affairs nor in diplomacy. Most of the folks who write on this subject are defence or diplomatic specialists. Others are considered as amateurs.

I do not remember what exactly sparked my interest in this subject but around the summer of 2012, it dawned on me that China was India’s enemy number one because it was militarily strong and had beaten us hollow once before—in 1962. Yet, at the same time Indian business was going gaga over China with nary a care. Indian companies were setting up of offices in Beijing and Shanghai and exports to China including that of iron ore (to make steel) was increasing. At the same time, Chinese imports to India of various kinds of goods was increasing manifold and the balance of trade was becoming adverse for India. Nobody seemed to be bothered.

Once I was admitted to a hospital after I fell ill. The bed I was lying on was too narrow. I asked the administrator where he got it from. He said he had flown down to Guangdong in China from where beds could be ordered! They came rather cheaply. Thereafter I kept my eyes open and realised that goods of all kinds were being imported from China: this included even ‘Kutch handicrafts’. I was getting worried because nobody in India seemed to mind. Perhaps they did not realise the consequences of this. A lot of Indians were getting taken in by China. In 2012, I wrote a biography of Narendra Modi—perhaps one of the first to be written on him. One of the chapters was called ‘The Chinese Connection’ wherein I noted that how Gujarat under the chief ministership of Modi had increased business with China; by implication this could lead to the disadvantage of India.

What according to you were the unaddressed issues that you wished to focus on through this book?

I learnt a lot about India-Chinese relationship and about China while doing the book. So, researching and writing on the book was a great learning experience for me and made me an aware citizen. Now when I look at the expressway constructed from the Gwadar port on Arabian Sea to Xinjiang province in China passing through Pakistan Occupied Kashmir (PoK), I realise how close the relationship between the two countries, considered rivals of India, have become.

Pakistan has lost the United States as an ally, but its absence will be made up by China which is also likely to finance many units that will come on the way. So, China is Pakistan’s new patron: the country that will give Pakistan finances, defence support and other help. All this is bad news for India because now other than contending with China on the north (across the Himalayas), we will have to manage a China boosted Pakistan on the west. What is worse they will be together. Pakistan knows India more intimately and can provide material that can be used against India (at least they can try).

For years, Indian analysts viewed China’s maritime growth from the prism of encirclement. The common refrain was that China was building a ‘string of pearls’ around India. Do Indian policymakers view the BRI similarly? What was your understanding in the course of writing this book?

The China Pakistan Economic Cooperation (CPEC)—which benefits Pakistan—is only one of the countries that China is seeking a close tie with. It has been an old Chinese desire to recreate the historical Silk Road (from where my book gets its name) that connected China with Europe through a road which would carry Chinese goods like silk and other stuff abroad. In pursuance of these policies, China is seeking cooperation with more than 50 countries many of which will be in India’s neighbourhood. These countries, many of them poor and looking for economic support, will be beholden to China for all the support (financing their infrastructure building) and will shift their allegiance to them and may be away from India. This is not good news for India.

China had invited India to join the BRI, which India declined. Do you envisage a possibility whereby India may find a mechanism of some kind of cooperation with BRI, given that both Russia and Pakistan (former close strategic partner and latter a military adversary) are part of it?

In this context we must also look at greater Chinese interest in the Indian Ocean. Earlier India was faced with China only on the Himalayas. Now Indian Ocean has been opened up. So, India feels a threat above and also below. Thus, India will have to gear its navy to meet this threat.

This means that India will have to develop a strategic viewpoint on the Indian Ocean. That the Chinese are a threat on Indian Ocean is a fact that common Indians are not aware of. Therefore, the need to educate them about this. The encirclement theory is something I believe in, therefore the ‘strings in a pearl’ theory of the Chinese is a reality in my opinion.

I am aware that India has been extended overtures to join the BRI but India has refused. The official reason is that the CPEC passes through PoK but the real reason is that India does not enjoy the prospect of being surrounded by the Chinese BRI. All of India’s neighbours are part of the BRI (or OBOR) except for Bhutan. This is hardly good news for India. So, India has taken a wise decision.

Military cooperation is a very strong aspect of BRI. However, you have steered clear of it. Was it deliberate?

Coming back to how the book was written: I approached two leading publishers in 2014-2015, and asked them whether they would look at a book on China. Both of them said no. Nobody is interested in China they said. But things changed dramatically after Covid. China’s international standing took a downturn. That’s how the book saw the light of the day.