How CRPF with some support from the army resisted Pak attack in the Rann of Kutch. An extract 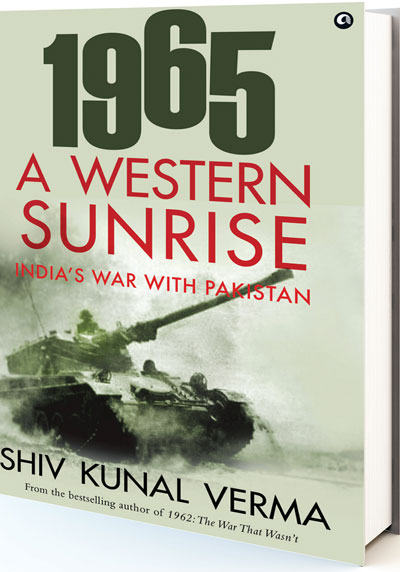 The withdrawal of INS Vikrant and all other naval ships from the waters off Kathiawar on 30 March allowed Pakistan to regroup. The possibility of an Indian amphibious thrust combined with the dropping of a para brigade into Sindh aimed at capturing Badin would certainly have occurred to both Musa and Ayub. From a purely theoretical point of view, it was a lost opportunity for the Indians. Unfortunately, despite India’s unique geographical positioning, with the subcontinent jutting out into the Indian Ocean and a coastline that extends from Kathiawar to the Sundarbans, India has never quite developed a maritime bent of mind. The naval chief was Admiral Bhaskar Sadashiv Soman and ever since 1962 (Sea Hawks and Alizes had been moved to Gorakhpur but air power in an offensive role was unfortunately not contemplated) the navy had been eager to see action. Chaudhuri, who had been the Southern Army commander, was known for his war room brilliance and a naval attack may not have been as far-fetched as it seems at first glance. If the recapture of Kanjarkot had indeed been the clear-cut objective, an amphibious landing would have placed the Indians behind Tikka Khan’s 8 Division, going for his home base while he was deployed facing 31 Brigade Group in the Rann.

Ayub and the Pakistan military leadership were extremely concerned at first and then relieved. On the ground around Kanjarkot, the Indians were not showing any signs of belligerence and the Pakistanis sitting on the dunes were getting impatient. Egged on by an aggressive Bhutto and the army, which was keen to test out its new equipment and tactics, and even though it would mean crossing the border into Indian territory, Ayub made up his mind.

By late afternoon on 6 April, Ayub had given the nod to General Musa for a pre-emptive assault on the Indian positions in the vicinity of Kanjarkot. Tikka Khan’s 8 Division was given the task of capturing Sardar Post by last light on 9 April and it was codenamed Operation Desert Hawk. On the morning of 7 April, Brigadier Azhar went over the ground with his battalion commanders and finalized 51 Brigade’s assault plan. 18 Punjab commanded by Lieutenant Colonel Mumtaz Ali, 6 Baluch under Lieutenant Colonel S. Z. H. Zaidi, and 8 FF under Janjua were tasked with capturing Sardar Post, where one company of CRPF was deployed with two more on the flank and one in depth.

Azhar wanted to launch the attack the same night but it had to be postponed to the early hours of 9 April due to the delay in moving the three battalions to their required locations. Mumtaz Ali’s Punjabis from the left and Janjua’s FF battalion were tasked with the capture of Sardar Post while Zaidi’s Baluchis were to capture the two flanking posts which the Pakistanis had named Shalimar and Jungle. At 0145 hrs, 18 Punjab and 8 FF, despite a fair deal of confusion still prevailing, started moving from their respective FUPs (forming-up areas) and managed to get into attacking positions without being detected by Indian patrols. Shortly thereafter, the 105 mm howitzers of 14 Field, commanded by Lieutenant Colonel Mohammad Iqbal, lit up the night sky as they began pounding the Indian positions. 88 Mortar Battery, under the command of Major Salim Malik, also joined the fray with their French-made 120 mm tubes raining fire on the hapless CRPF posts.

The intense bombardment was lifted at 0300 hrs as Pakistani infantry began its assault on the Indian positions. The flanking post of Shalimar had been vacated by the Indians and it was occupied by 6 Baluch, but the defenders at Sardar Post, supported by the MMGs of 1 Mahar, tenaciously fought back. Captain M. K. Bansal and Havildar Gopinath Bhingardive in particular played a stellar role in keeping the defenders organized. In the darkness, confusion continued to prevail on the Pakistani side, with the leading Punjab elements going for the FF’s objectives. Karnail Singh had deployed his sections in a triangular manner, and his own section got involved in a hand-to-hand fight with 18 Punjab. Eventually, Karnail Singh and the bulk of this section was overpowered, but the other two positions continued to hold out.

Both Pakistani and Indian commentators agree that the Pakistan attack on Sardar Post failed despite the fighting continuing for almost fourteen hours. After daybreak, the Pakistani artillery bombardment picked up again as the infantry was not making any headway. At around 1600 hrs the totally exhausted CRPF troops finally decided to fall back 2 km. Brigadier Pahalajani also ordered the 1 Mahar troops to fall back. However, Azhar, fearing an Indian counter-attack, simultaneously decided to break contact and ordered his three battalions to start withdrawing to their start position. As a result, he failed to realize that Sardar Post was now unoccupied.

Today, at the spot where the handful of CRPF men faced the onslaught of an entire Pakistani brigade, there is a small pillar that serves as a memorial for Lance Naiks Kishore Singh and Ganpath Ram and Sepoys Shamsher Singh, Gyan Singh, Hari Ram, and Sidhveer Singh Pradhan who lost their lives. The plaque that briefly describes the fighting puts the Pakistani dead at thirty-four. It also acknowledges that nineteen CRPF men were captured. That figure included the CO, Major Karnail Singh, and a JCO, Jemadar Baldev Singh, plus eight non-combatants. Sundarji, who was otherwise fairly critical of the SRP and the CRPF deployments, reached Sardar Post with a patrol from 2 Sikh LI later in the evening on 9 April to see if the Pakistanis had occupied the position and acknowledged that there were Pakistani dead lying all over the place. 51 Brigade had not only failed to dislodge the CRPF, but had committed the cardinal sin of leaving their own dead behind.

Pahalajani also visited Sardar Post before last light, but the DIG of police at Vigokot was convinced that the Pakistanis would resume their offensive under cover of darkness. Much to the horror of 31 Brigade, the DIG ordered the CRPF companies to fall back from Vigokot. This created a yawning gap in the defences that could have had disastrous consequences. 17 Raj Rif that was being held in reserve was then ordered to rush its Charlie Company to Vigokot post-haste.

2 Sikh LI reinforced its patrol and reoccupied Sardar Post during the night. Orders were issued to 11 Field to locate its headquarters at Dharamsala while one battery was asked to move at night and was positioned at Vigokot by the next morning. However, the number of Sikh LI men holding Sardar Post through the next day was miniscule and Pahalajani spent a nervous day hoping the Pakistanis would not launch a second attack. Fortunately for him, Pakistan’s 51 Brigade sat tight, allowing Pahalajani to thin his defences at Vigokot the next day and move a Sikh LI company there as well. On 12 April, 1 Mahar had been ordered to take over the defence of Sardar Post and Sikh LI were moved back to their position at Vigokot on 14 April. A patrol sent out to Kanjarkot returned with the news that the Pakistanis with two companies continued to hold their positions with the addition of at least one jeep-mounted RCL gun. All this reshuffling of troops and moving men between Sardar Post and Vigokot, mostly under Pakistani observation, further convinced Azhar that Indian reinforcements had arrived to support the CRPF. By any standard, Operation Desert Hawk had been a failure, an unmitigated disaster.

The attack had not gone according to plan for Pakistan. The fighting had underlined that a well-entrenched defensive force that was willing to fight and not get intimidated by the bluster of ‘superior weapon systems’ could give as good as it got. Though the Indians who had fought at the Sardar Post were primarily CRPF with a handful of regular army in support, it should have been obvious to Pakistan right at that stage that it was a victim of its own propaganda. Unfortunately for them, the failure of Desert Hawk was brushed under the carpet, and though it was the end of the road for Azhar, it only increased the belief that once Pakistan fielded its armour, things would then go their way.

The official report put out by the Ministry of Defence in India quotes Sundarji extensively and is perhaps echoing his views when it criticizes Pahalajani for his ‘inept handling’ of the Sardar Post incident. Given the conditions in the Rann, especially the lack of water and a road communication network, 31 Brigade did a commendable job. Left to Sundarji, since he was also the officiating commander for a considerable length of time, Indian troops would most likely have rushed into Kanjarkot where they would have in all probability been decimated by the Pakistanis who were on firm ground. The Indian performance also suggested that defensive battles could be fought on ground that was not of Pakistan’s choosing. Pahalajani may not have been a flamboyant and dashing commander, but he certainly succeeded in holding his ground despite the existing extreme negative conditions.