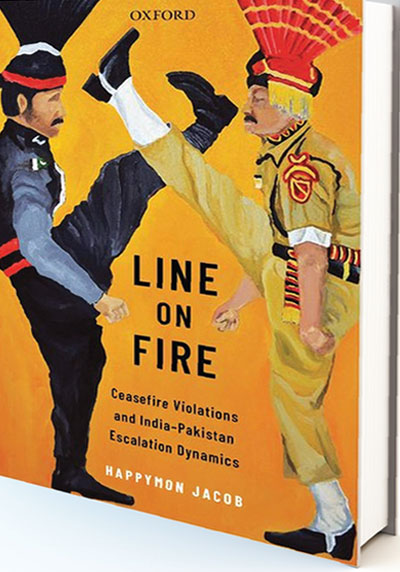 Line of Fire by Happymon Jacob seeks to address the causes of Ceasefire Violations (CFVs) along the Line of Control (LC), the links between CFVs and crisis escalation, and the dangers of CFV-linked escalation under nuclear overhang. In doing so, the book further nuances the existing notions about the escalatory dynamics between India and Pakistan.

India shares a 3,323 km long border with Pakistan, of which, 1,125 km lies in Jammu and Kashmir. The Indian Army mans the 772.1 km LC and the 126.2 km Actual Ground Position Line along the Siachen glacier. A 201 km long International Border (IB) is manned by the Border Security Force (BSF), except for a 10 km stretch manned by the army south of Chenab river. On the Pakistani side, the IB sector is managed by the Chenab Rangers, and the Pakistan Army mans the LC. Pakistan also occupies 78,114 sq. km of Indian territory in Jammu and Kashmir and has been waging a proxy war for the last three decades. Internal security threats emanate from across the LC with active support to terrorist by Pakistan as a state policy. Hence, it is imperative to analyse and understand the dynamics along the LC. There have been numerous books and articles published detailing India’s security challenges, India-Pakistan equations as also on terrorism, however Line of Fire is the first detailed book which comprehensively analyses the dynamics of the LC which continues to be one of the most militarily manned, mined and violent line in the world. The book has not only been written after extensive research based on interviews of 80 experts from either side of the borders, but the author has also physically travelled and traversed the LC on both Indian and Pakistani side, gaining an unprecedented perspective of ground realities as also contradictory positions and narratives. In addition, the book analyses extensive data sets available in the public domain. In essence, this book offers to de-mythify popular notions about the CFVs and India-Pakistan escalation dynamics, further explaining CFVs using the concept of Autonomous Military Factors (AMFs). All those who have served along the LC will certainly find it apt and interesting, relating to the terrain and incidents, and others who want to understand the LC will get a comprehensive view of the dynamics and realities of the border on either side.

The author has undertaken an in-depth empirical examination of the linkages between terrorist incidents, CFVs and escalation dynamic. While this study does not dispute the significance of terrorist incidents (such as the attacks on Mumbai in 2008 or the Uri Army camp in 2016) in explaining escalation dynamics, it argues that CFVs are a major source of political, military, and diplomatic escalation between the two countries.

The author examines three types of cases: one, where CFVs lead to crisis escalation; two, where CFVs contribute to worsening an ongoing crisis and thereby, spiking the escalatory ladder; and three, where conventional military escalation gets played out on the front lines in the form of CFVs, either because it is nearly impossible to go to war and so focus gets shifted to the border, or because firing on the border, however severe, is not viewed as escalatory. The book then aims to do three new things: (i) examine a number of hitherto unexplored causes for the CFVs in Jammu and Kashmir; (ii) challenge the existing wisdom in the academic literature and policy circles on crisis escalation (iii) offer an overview of the historical evolution of the India-Pakistan border in Jammu and Kashmir.

The author makes five key arguments. One, CFVs are generally not planned or directed by higher military or political authorities but are instead driven by the dynamics on the front lines. AMFs, a concept that is explained, are a major trigger for CFVs. The prominence of AMFs is directly proportional to the abdication of responsibility by the political establishment in resolving the border standoffs and conflicts between the two sides. Two, the 2003 Ceasefire Agreement (CFA) tends to hold when the two sides engage in a dialogue process on key disputes. During these phases, AMFs have little or no influence.  During times of bilateral tension, however, the CFA tends to break down and CFVs become routine. Three, CFVs, prominently caused by AMFs, contribute to India-Pakistan escalation dynamics in a significant manner. Conventional wisdom suggests that terror attacks are the primary cause of India-Pakistan escalation. However, evidence shows that political, diplomatic, and military tensions between the two adversaries have occurred due to CFVs even when there have been no terror attacks. More importantly, the combined effect of terror attacks and CFVs have the potential to increase the escalatory effect exponentially. Four, in the nuclearised India-Pakistan rivalry, crisis escalation is often a result of lower-level conflicts, adversarial interaction between forces in tactical environments, and their unpredictable impact on higher-level military and or political relationship. Finally, adhocism in managing the border has historically been a key factor behind border tensions.


The book is divided into seven chapters including the introduction and conclusion. Chapter 2, ‘Conceptualizing Escalation Dynamics in South Asia’, serves as a theoretical and conceptual framework discussing classical views on escalation, examining the traditional understanding of the escalation ladder, and concludes by highlighting the missing link, that is, the potency of CFVs to trigger bilateral escalation. Chapter 3, ‘(Mis)managing the Border: A History of Practices and Mechanisms’, examines the management of the border and LC in Jammu and Kashmir, discussing the early role played by the UN monitoring group in helping the management of CFL. The various border management practices and mechanism in managing the IB and LC are discussed, thus providing the technical knowledge to understand the occurrence of CFVs. Chapter 4, ‘Lull Before the Storm; The 2003 Ceasefire Agreement and After’, offers a historical and statistical analysis of CFVs to put them in proper perspective before attempting to, in the next chapter, explain why they occur. Section one focuses on the CFVs prior to 2003 when the current CFA was agreed. Section two analyses the various data sets on CFVs, and draws conclusions regarding the locations, causes, and various other related factors as also how CFVs are counted, the spread horizontally and vertically, and the existing explanations for the occurrence of CFVs.

Chapter 5, ‘Military Gamesmanship and Moral Ascendancy: Explaining Ceasefire Violations’, unearths several hitherto unexamined causes behind CFVs. While the focus of the chapter is to explain the triggers for the CFVs from 2003 onwards, several of these causative explanations pre-date 2003 especially the Nineties, when the firing between the two forces were at a high, examining the causes of CFVs in two subscriptions; political factors and AMFs. Chapter 6, ‘Ceasefire Violations and Crisis Escalation: Analyzing the Data’, argues that there is an empirically evident linkage between CFVs and India-Pakistan escalation dynamics. The chapter offers quantitative evidence to show how CFVs and escalation dynamics are interconnected. Escalation data as well as CFV data for 15 years, from 2002 to 2016, are presented for this purpose. It also picks out eight cases from the data set to show the linkage between CFVs and crisis escalation. The final chapter reflects on the theoretical and practical implications of the arguments leading to policy implications as well as offers policy recommendations to reduce CFVs and escalation control.

In essence, the assessment is that there is a focus on rational decision-making, centralised leadership, controlled and planned escalation, with an unstated belief in the ability to control escalation. Even when terror strikes trigger escalation, the control exercised by the political class is complete and it’s a central decision to escalate or not. Terror strikes are the primary cause behind escalation to higher levels of the escalatory ladder. Besides explaining the causes of CFVs within the larger historical context of India-Pakistan border negotiations, the book has nuanced and problematised the existing notions about the escalatory dynamics between the two South Asians nuclear rivals.

The book written prior to ‘Pulwama’ terrorist attack wherein 40 Central Reserve Police Force (CRPF) personnel were martyred leading to the air strikes on Balakote and the Pakistan Air Force (PAF) response thereafter comes at an opportune time for all to not only read but study the arguments. While the tensions between India and Pakistan continue to remain high, Line of Fire also details not only the causative factors of escalation but also certain key policy recommendations on de-escalation or escalation control. The book published by Oxford University Press has a foreword by Lt Gen H.S. Panag, former Indian Army Commander Northern Command, and Lt Gen Waheed Arshad, former Chief of Staff Pakistan Army.

A must read to understand the LC, the escalation dynamics and India Pakistan relations.

(The writer is a former DGMO and director CENJOWS)