As One Gets Further Away from the Border, The Enthusiasm for Hard Borders Increases. It is Safe to Say That Most Indians Have Never Seen a Border in Their Lives 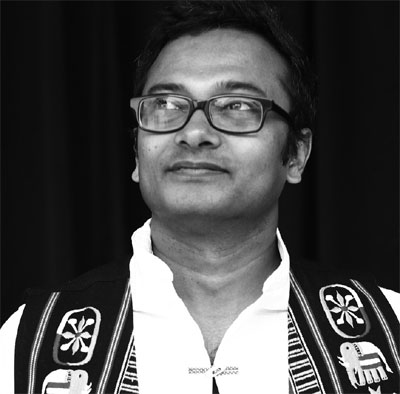 One’s treatment of a river depends upon one’s sentiments for it. Since Ganga was considered the holiest of all rivers, for decades people regarded it as a self-purifying body of water which would never get polluted no matter what they did. Brahmaputra traverses different legends, nations and religious beliefs. How does people’s equation with the river change with the change in the national boundaries?

That’s an interesting question. Well, the Brahmaputra doesn’t carry the same burden of holiness that the Ganga does, and it is also a lot less polluted, but the pollution of the Ganga is not really because of sentiments but in spite of them. Although the Ganga is considered holy, entire towns and villages mainly in Uttar Pradesh discharge untreated residential waste into it. The waste from lakhs of drains is discharged into the river. Additionally, industries, even ones that have effluent treatment plants, don’t run those plants. When it comes to saving on electricity bills, all the holiness of the river is forgotten. Naturally the water gets dirty. The Brahmaputra is less polluted only because there is a smaller population along its banks, and fewer industries, otherwise the same problems and attitudes exist. Holiness, unholiness and sentiment have less to do with the matter than good civic management and industries following pollution norms.

The communities that live along the Brahmaputra’s banks fear, love and respect it as a force of nature, call it Aane meaning mother in Arunachal and Mahabahu meaning mighty in Assam, but they usually don’t worship it. These feelings of awe, fear, love and respect seem to be shared by the inhabitants of riverine geographies across man-made boundaries. National boundaries are very recent and very imaginary, mere lines on maps. They are drawn perpendicular to the flow of the river in the case of the Brahmaputra, which is ridiculous since the Brahmaputra itself was the main artery of travel into what is now Northeast India for practically the whole of history, when there were no roads worth the name. The people living up and down the river across the Indo-Bangladesh border are mainly Bengali Muslims on both sides. Naturally, nothing much changes with the change of national boundaries.

The big differences in people’s equations with the river are not determined by national boundaries but by class, which also has an overlap with caste. Richer people, often belonging to traditionally higher castes, did not usually do the work of fishing, for instance. Nor were they peasants farming the floodplains. They lived on the best lands, which was the lands that did not sink under the floods, and they usually stayed a safe distance away from the river.

Rivers, like mountains, have been regarded as natural boundaries because of their obstacle-like characteristics. In an obscure military thinking, Brahmaputra was considered as an obstacle of sorts against China, perhaps owing to the 1962 experience. Does the river shape the perception of the people of Arunachal Pradesh and Assam differently?

The river itself is very different in Arunachal and Assam. The Siang in Arunachal is a powerful mountain stream around a kilometre wide, and it flows through ravines for a large part of its journey. The Brahmaputra in Assam is a vast river that is as much as 16-17 km wide in upper Assam, and it is of course famed for its annual floods. Naturally, the sense of fear and awe for the Brahmaputra is more evident than that towards the Siang. However, the Siang is not navigable by boat for almost its entire length. The Brahmaputra is. Water both separates and joins. So, while there is a perception from the days before the recently-constructed bridges of both the Siang and the Brahmaputra as being barriers to movement, that perception seems to me to be less marked in those who actually live by the Brahmaputra, because they have traditionally travelled on the river. This has nothing to do with state boundaries. It is related to traditional habitats and occupations.

Mark Shand’s River Dog was an adventurous and gentle travelogue, following roughly a similar trajectory. Your book is clearly not a travelogue, despite the travel. How did you envisage The Braided River when you decided to follow the course of the river? What was your objective?

Shand’s book was indeed adventurous and gentle, and I greatly enjoyed reading his genial account. However, I must take issue with your statement that The Braided River is not a travelogue, because I think it is. What makes a book a travelogue? In my understanding, it is the travel, because styles of writing can and do vary from one writer to another. We can take examples from across the world and across the centuries. Whether you look at the travelogue of Hiuen Tsang from China in the 7th Century A.D., Ibn Battuta from Morocco in the 14th Century, or Marco Polo from Venice in between, these accounts were not merely adventurous and gentle; they also recorded a lot of details about the places the writers travelled through and the people they saw and met. That is why they are valuable accounts that have stood the test of the greatest literary critic of all: Time.

The best contemporary travel writers also write in depth about places, in their own styles. Pico Iyer and William Dalrymple both write about places, but their writing is enriched by a great deal of research about the place. Others before them such as Ryszard Kapuscinski and V.S. Naipaul were also part of this great tradition of travel writing. The best travel writing through the centuries thus involves going beyond mere shallow observations and personal anecdotes. My objective was to try and follow humbly in the footsteps of the masters of this craft.


While you have described your encounter with the Indian Army in Arunachal Pradesh, how do civilians in different parts of the Northeast regard the people in uniform? I am told that the equation between the two gets friendlier closer to the border. What was your experience in your interaction with the local people?

This is hard to generalise. The Northeast is eight states. For the sake of comparison, let’s look at eight other adjacent states. How do civilians of the eight states of Kerala, Karnataka, Maharashtra, Gujarat, Rajasthan, Punjab, Himachal Pradesh and the former state of Jammu and Kashmir regard people in uniform? Obviously, there will be vast differences from place to place even within a single state. These may be more for a big state and less for a smaller state, but they will be there. The differences would depend on local histories. As far as friendliness nearer the border goes, that may have other causes. Border areas are typically remote, godforsaken places. The military and the locals are both stuck with each other in those places. It is natural that normal human conversations and interactions between them may happen. Apart from familiarity, the fact that the military has valuable transport and medical facilities and alcohol supplies no doubt endears them further to the locals in border areas.

You have touched upon the NRC/ CAA issues. While the river recognises no national boundaries, rivers have been subjects of disagreements and disputes. Are there places along the Brahmaputra where people feel that softer boundaries and free flow of humans, goods and natural resources would lead to greater prosperity? Or do people favour even hardened borders?

The attitudes towards borders are always very different in the border areas themselves, in state capitals, and in the national capital. As one gets further away from the border, the enthusiasm for hard borders increases. It is safe to say that most Indians have never seen a border in their lives. Even if they have, it’s probably the most theatrical and most absurd of borders, the one at Wagah in Punjab between India and Pakistan. They therefore do not understand the simple fact that for people living near the border, the state capital may be very far away and the nearest village on the other side of the border may be shouting distance. Whatever interactions of normal daily life they have would be with their neighbours who are probably very much like them, if the place was not cursed by a hard border. A hard border is a pain for those who dwell near it. It is a necessity of the national imagination that disrupts normal, very humble, lives of villagers in remote areas. In the case of Lower Assam, however, this is a curse that many seem willing to accept because they are simply sick and tired of being forever viewed with suspicion as illegal Bangladeshi immigrants. The bulk of Bengali Muslim migration from what is now Bangladesh happened before the Partition of India, when the British administration brought the ancestors of these people as farmers and farm labour to increase paddy and jute cultivation. There may have been a trickle of economic migrants after that, but it was not a flood. The Hindu Bengalis displaced by Partition came mainly between 1947-71. After Bangladesh was formed in 1971, they all, Hindu and Muslim alike, earned the retrospective label of Bangladeshi. They generally want to reassure their neighbours that they are Indians, even if that means going through the troubles of the NRC. Unfortunately for them, though, their efforts may prove to have been in vain. There are now demands to re-do the entire exercise.

Lastly, were there any big surprises in the course of your journey?

Hmm… I think having to run across quicksand was a bit of a surprise, and there were other moments like that. For instance, going to what we thought was a bar and realising we had managed to crash a funeral. That was definitely a shock. Ha ha.

The biggest surprise however was actually seeing the Brahmaputra in upper Assam for the first time. Most people have this notion that a river is a channel of water flowing neatly between two banks, and that was the image in my head too. But when my friend, photographer Akshay Mahajan, and I, went to upper Assam looking for the Brahmaputra we realised something was amiss. People would point towards vast channels of water that we thought was the Brahmaputra and then say “but this is the Dibru” or something. It took us a while to realise that many channels of water had their own names but were actually braids of the braided river. The Brahmaputra is not one neat channel between two banks. It is a vast and unruly collection of these braids that wax and wane with the seasons. The image of a neat water channel between two banks, which is actually the image of a canal rather than a living river, is a fallacy.