A brief history of Gurkhas, told by a Gurkha 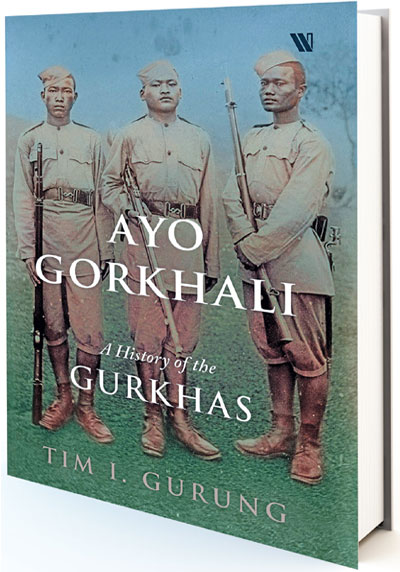 The author must be congratulated for the book which is a bold and courageous venture typifying these very Gurkha traits. Tim I Gurung is presumably the author’s post-retirement name as he could only have been recruited in 1980 as Til Bahadur or Tirath Singh followed by the Gurung surname. But I could be wrong. He worked in China after leaving service and is now settled in Chinese Hong Kong, where it is not unusual for Gurkhas to change their first name to more familiar western ones.

Tim joined the British 6 Gurkha Rifles and served in his battalion rotating between Hong Kong and Brunei but missing out UK before hanging up his Gurkha hat after a short, 13-year pensionable service as a Corporal. Ayo Gorkhali: A History of the Gurkhas is the first ever book in English on Gurkhas by a native Gurkha soldier from Dhampus village overlooking Pokhara valley, the heartland of Gurungs and other Gurkha warriors. Dhampus was made famous by Prince Charles—a Colonel Commandant of the Gurkhas who is still served by Gurung and Pun orderlies—in 1983, when he trekked to the village accompanied by Nepal’s Prince Dhirendra, King Birendra’s younger brother. Tim has provided the first bottom-up view of Gurkhas but only, rather mainly, of British Gurkhas, where he served. Most books on British Gurkha warriors are written either by British officers or western scholars.

Ayo Gorkhali is a snapshot of the history of the British Gurkhas as it is impossible to faithfully compress the history of 11 regiments and 51 battalions into one volume even as each battalion and regiment has its own recorded history. Tim’s ambition of placing 200 years of Gurkha history in one book written by a Gurkha has been consummated so that ‘admirers of Gurkha legacy won’t have to look for another book’. Some still might. Tim has produced a capsule of history with its stark consequences—the victimhood of Gurkhas, their betrayal by the master and drainage of youth from Nepal and their cumulative aftermath. Tim is not alone in accusing Britain of betrayal, Rana and Shah rulers of Nepal pursuing their individual interests and of governments that followed in Nepal neglecting to take up Gurkha grievances.

The book is organised into crisp chapters like Origin of Gurkhas; Start of the 200-year-old Legacy (less than half shared with Indian Gurkhas); and History of the Gurkhas’ Ultimate Weapon, the Kukri or Khukuri. Three items associated with the Gurkhas are the Gurkha hat, khukuri and madal (Gurkha drum). Tim mentions that the first ever khukuri battle was to rescue French hostages in 1946 from Viet Minh by 1/1 GR. In fact, 4/5 GR (FF) in 1971 war launched a silent khukuri attack at Atgram in Bangladesh war. Yes, khukuri is the metaphor for ‘manhood and bravery’ with legendary tales of the use of khukuri in battles to spread terror among the enemy. Its most recent example was during the Falklands war where Gurkhas were demonised to terrorise the enemy, a propaganda tactics that Tim abhorred. Other chapters cover formation of Gurkha brigade, history of campaigns of World Wars, partition of Gurkhas, Indian Army Gorkhas, truncated British Gurkhas and several institutions involved in addressing Gurkha grievances. Indian Gorkhas use the Nepali spelling derived from Gorkha, the area from which the warriors hail. The British clipped the O into U.

The early view was that Britain even though impressed with the military prowess of Gurkhas in Nepal’s expansionist wars, was forced to curb its military zeal as it enlarged territorially east and westwards from Mechi and Mahakali rivers to Teesta and Sutlej rivers. In the short war, Nepali generals and the Gurkha armies performed outstanding feats of courage with limited resources and came close to defeating British invasions of 1814-16 but ultimately Gurkhas were forced to accept the ignominy of surrender with Treaty of Sugauli. Nepal dispossessed of conquered land reverted to its original river borders. Nepal could never retain the services of any foreign subject without British consent and had to accept a British Resident in Kathmandu.

The author suggests that the one thing Britain coveted most—recruitment of Gurkha soldiers—though not officially covered by the Sugauli Treaty was clandestinely realised. Gurkhas joined British Indian Army to form the first five Gurkha regiments from 1815 to 1860. Britain was never seriously interested in conquering Nepal due to difficulties of terrain and maintenance of troops across malaria infested Terai. While their main concern was neutralizing Maratha and Sikh Armies, in Nepal the prize was the Gurkha soldiers. Tim argues that the veiled permission to Britain to recruit Gurkhas depleted Nepal of its youth and at one stroke removed any military threat from Nepal. The British achieved their objectives without cost of colonization with the tacit help of Nepali rulers who were lavished with honours and awards and made much of during visits to UK. Many Nepalese proudly say their country was never colonised.

The account of campaigns of different regiments is covered up to World War II but with some discrepancies. For instance, the narrative has missed mentioning the award of Victoria Cross to Agan Singh Rai in the Battle of Mortar Bluff and Water Picquet in June 1944 where 2/5 Gurkha Rifles (Frontier Force) won two VCs in this one action. This is because he has probably relied on a version by a 7 GR British officer who has credited 2/7 GR with recapture of Water Picquet, overlooking the Second Fifth feat. Tim takes up cudgels with British for their disastrous campaigns in Gallipoli and Mesopotamia where Gurkhas suffered colossal casualties but took them on the chin. The stories of mobilisation during war and disbanding of units when they ended continued after both World Wars leaving demobilised Gurkhas to fend for themselves.

The partition of Gurkhas between Britain and India is a sad story. Very few Gurkhas to the shock of British government wished to remain with British Gurkhas—called Malaya ko Lahure (soldier) and Indian Gurkhas (India ko Lahure). Immense pressure was applied including refusal to hand over Andaman and Nicobar island territories in order to retain some regiments. Of the ten Gurkha regiments, 1, 3, 4, 5 ,8 and 9 opted to join India and remaining 2, 6, 7 and 10 agreed to stay on with British Army. Later, India re-raised 11 GR, its seventh regiment. Tim does not mention that British officers literally tried to steal Mess silver from regiments that opted to join the Indian Army. Much of the silver was uncovered at Bombay Port and some returned later. In 1947, the Tripartite Treaty on Recruitment of Gurkhas between India, UK and Nepal placed British Gurkhas at a par with Indian Gorkhas regardless of where they were deployed and were to be governed by the Indian Pay Code on salary and pension. This had led to continued unequal treatment of Gurkhas with their British counterparts in the same army resulting in a plethora of grievances and court battles.


In 1994, the British Gurkhas were trimmed from 5 battalions to two battalions down from 10,000 to 2,500 Gurkhas, a very steep fall. Once again, demobilized Gurkhas according to Tim, were left in the lurch due to British perfidy. Today, the British Gurkha strength is roughly 3,500 with battalions rotating between UK and Brunei where the Sultan has been paying for stationing one battalion for the last 60 years. 1/2 GR rescued the Sultan of Brunei from an internal revolt in 1962 and since then the Sultanate has been grateful for life. And the British MoD happily relieved of paying in entirety for one Gurkha battalion.

In another snipe at the British, Tim notes British officers saying Gurkhas are great because of British leadership. They have let only one Gurkha officer, Col Bijay Kumar Rawat, 7 GR, to command a battalion though four Gurkhas reached the rank of Colonel/Lt Colonel. Compared to Indian Gorkhas, the discrimination is startling. But spectacular reforms have taken place in the Gurkha Brigade on equality and fair treatment. After winning cases in court in 2004 and 2009, Gurkhas can now reside in the UK after retirement and are enjoying privileges as British citizens and soldiers though they can’t vote. But the fight for equal pension is going on. Tim says Gurkhas are getting equal pay, welfare and pension as British counterparts since 2008. The stigma of mercenary has gone. There is respect now not flattery of Gurkhas. On Gurkhas fighting for justice, Tim says British officers are saying: ‘bau baaje jasto chhai na’ (not like their fathers and grandfathers anymore). The ancestors of Gurkhas never complained.

Tim’s ‘last words’ suggests that the Gurkha story is not one of bravery alone but also tragedy, because of British betrayal. While Nepal’s rulers took credit for the first, they disowned the tragedy, he emphasizes. He recalls Sir Arther Hirtzel, undersecretary of state for India in 1922 saying: ‘It is after all, mainly because of the Gurkhas in the Army, that we value friendship with Nepal’. That says it all! Ayo Gurkhali is a timely narrative inclusive of many other battles fought by Gurkhas and their friends for securing, though belatedly, a level playing field for preserving the 200-year Gurkha legacy with Britain and shared with India. To the question Tim poses: were the British fair to the Gurkhas, the answer comes out clearly. It is difficult not the love the Gurkhas especially if you have served with them. A must-read book of Gurkha valour and their fight for justice in the British Army.

(The writer is an officer from the Indian Gorkhas and has trekked 40,000 km in Nepal since 1959