A belated biography of General T.N. Raina does justice to his life and times 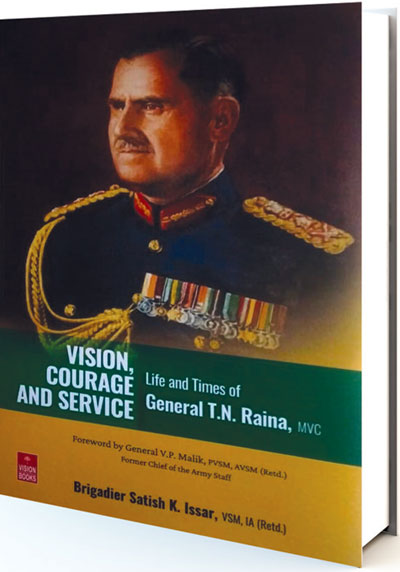 Chushul in Eastern Ladakh is in the headlines because of the prolonged military stand-off between India and China. But not many remember the officer who commanded the 114 Infantry Brigade, who commanded the famous Battle of Rezang La in October 1962. General T.N. Raina was an iconic Indian military leader whose contribution to the nation should be more widely known.

This biography of General Raina written by Brigadier Satish Issar, VSM who served as his military attaché when he was the Chief of Army Staff (1975-78) sets out to do precisely that. It is thanks to the leadership of General Raina, then a Brigadier, that India was able to save the airfield at Chushul from falling into the hands of the Chinese. Had Chushul been taken over, Ladakh would have been in China’s control today.

Issar brings alive this battle, for which General Raina was decorated with the Mahavir Chakra. But we are also reminded that in one brigade sector two Param Vir Chakras were awarded. Both posthumously to Major Dhan Singh Thapa and Major Shaitan Singh respectively. Almost a year later, Thapa had been taken prisoner by the Chinese. He was repatriated along with the other prisoner of war.

The book profiles how the most daring battle was led by 13 Kumaon. Though they were heavily outnumbered—there were 10 Chinese men for every Indian—the Indian post at Rezang La under Maj. Shaitan Singh was defended till the last man standing. For too long the Indian military has been trained to operate on lessons derived from World War II. But as Issar’s book shows there are many invaluable lessons to be learnt closer home.

Brig. Issar’s biography of General Raina quotes heavily from the memory of Ninette Raina, the General’s wife. Raina, nicknamed Tappy in the Army, met her in Saigon, when he was a 24-year-old Captain. In 1945, after the surrender of the Japanese forces, 500,000 of their men had to be disarmed. General Raina was posted in Vietnam as part of an Indian formation under the Allied Forces. Ninette’s rendition from those years, as documented in Issar’s book, says, ‘Young Indian Army officers and soldiers soon became popular with the locals because of their civilised and cultured behaviour. The French in Saigon were jubilant to see the Indian army.’

After repatriation of the French nationals from Indo China, Ninette left for France and for three years, Tappy and Ninette corresponded through letters. She came to India by ship in 1949, arriving at Pondicherry, then a French Colony. They were soon married by Arya Samaj rites.

General Raina was born into a middle class Kashmiri Brahmin family. He was commissioned into 1/19 Hyderabad Regiment, (later 1 KUMAON ), in April 1942. On early service in Iraq, a grenade injury caused him to lose one eye. But that never impacted his rise up the ranks to the very top post. Following promotion to the rank of Lt Col he was posted as instructor at the Defence Services Staff College. Subsequently he commanded 14 Kumaon (Gwalior, now 5 Mech) with distinction, creating high standards in training, sports and leadership. Then came his glorious performance in Ladakh.

Readers will be enthralled to learn that Brig. Raina was subsequently promoted to the rank of Major General and given command of the challenging 25 Infantry Division Sector on the Cease Fire Line. This is where I first met General Raina, posted as his ADC in Rajouri. On 10 January 1966, as the Tashkent Declaration was signed, General Raina was tasked to oversee the give and take at the CFL, in the light of our withdrawal, among other areas, from the Hajipir Pass and the Pakistani withdrawal from Akhnur.

Tappy Raina was fortunate to take up operational responsibility in every senior rank. In 1971, he was promoted to the rank of Lieutenant General and tasked to raise the 2 Corps, which was launched into operations in erstwhile East Pakistan. The moment the creation of Bangladesh seemed imminent, Raina’s 2 Corps was moved to the Western theatre, in anticipation of Pakistani retaliation.

Tappy Raina thus experienced operations in both theatres of war. For his contribution to the nation in the 1971 War, he was conferred the award of Padma Bhushan. He was elevated to the rank of Army Commander, Western Command and thereafter as Chief of the Army Staff (COAS) at the young age of 54. Tappy Raina upheld the apolitical ethos of the army and the status of the office of COAS by refusing to associate the military with Mrs Indira Gandhi’s emergency. On the day before the emergency was declared, the Chief left on an official tour of the Rajasthan sector. I, as the Deputy MA to the COAS, was out in the afternoon enjoying a game of golf. Suddenly I saw my wife wearing a helmet and running across the Army golf course fairway. She had hopped onto my scooter to inform me that a call had come at home that the Chief was returning to Delhi cutting short his trip. We rushed to receive him. The Chief, later in the evening went to the PM’s residence. We do not know what happened. But the army kept its distance.

A huge contribution of the General to the armed forces was the relocation of many Regimental Centres to the interior areas and moving field formations to those locations from where they could be mobilized faster for war. Despite stiff resistance to this proposal, General Raina ensured a time bound relocation plan.

The book informs us that it was General Raina who first set up an Experts Committee to prepare a 25 years perspective plan (1975-2000) for the army. The Committee comprised professionally talented and promising officers, capable of preparing and implementing the report. This fact alone had a profound impact on the modernisation of the army. Lt Gen. Satish Nambiar PVSM, AVSM, VrC, (retd), tells Issar; ‘I can say without fear of contradiction that the capability of the Indian Army to deal with events of 1980s and 1990s through to Kargil, and even today are due to General Raina’s visionary measures.’

No one in the army can forget the slew of welfare measures taken by General Raina for servicemen and families. These include permanent pension benefits for jawans, insurance schemes for all ranks, conceptualising and introducing the Army Welfare Housing Organisation and the setting up of Army Public Schools. The book also captures the human side of his extraordinary life. On 5 March 1974, Tappy and Ninette’s only son, Joe, commissioned in the same battalion as his father, met with a terrible accident, the victim of a hit and run in the cantonment area of Jalandhar.

This fascinating biography is a must read for all officers of the Indian armed forces, public servants, and patriotic Indians across the canvas of professions. It is important to note that the author’s credentials are impeccable. Not only has he worked in various capacities on the personal staff of General Raina and was closely associated with the family, but he has also earlier chronicled the biography of another illustrious army chief, General S.M. Srinagesh. The entire proceeds of the book will go to the War Widows Fund of the Kumaon Regiment.

The book was released in May 2021 by the present Army Chief, in the presence of the Colonel of The Kumaon Regiment, in a low-key ceremony due to the Covid-19 pandemic. Somewhat belated in coming, the book’s relevance in the current national context cannot be overstated.

(The writer retd as joint secretary, government of India)