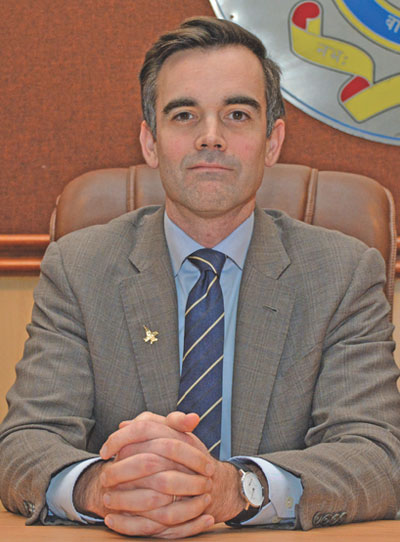 Thomas asserted that the Block III variant of the F/A-18 Super Hornet being offered to India is one of the most combat proven fighters in the United States fighter aircraft inventory and is already serving as the US Navy’s frontline fighter and will continue to do so for many decades to come.

He announced that Boeing will be delivering F/A-18 Super Hornets to the Kuwaiti Air Force this year in addition to a multitude of interested international customers. Thomas outlined that the Block III variant not only meets the IAF’s range and stealth requirements, but it also meets the Indian Navy’s requirement for a fighter that supports both catapult-launch (CATOBAR) and ski-lift-launch (STOBAR) configurations.

Highlighting some of the advantages of the Super Hornet over the other contenders in MRCA 2.0, Thomas said that the F/A-18 offers unparalleled performance and affordability. In fact, he said, “The F/A-18 costs less per flight hour than any other fighter in the US armed forces’ inventory.” He added, “It is also the stealthiest aircraft amongst the competition.”

The Block III will also have some newer enhancements like an advanced cockpit system and a flat interactive display for the pilot.

Concluding the press conference, Thomas said, “We are here for the long term. We are investing heavily now so we’ll be ready to produce the fighter in India when the time comes.”