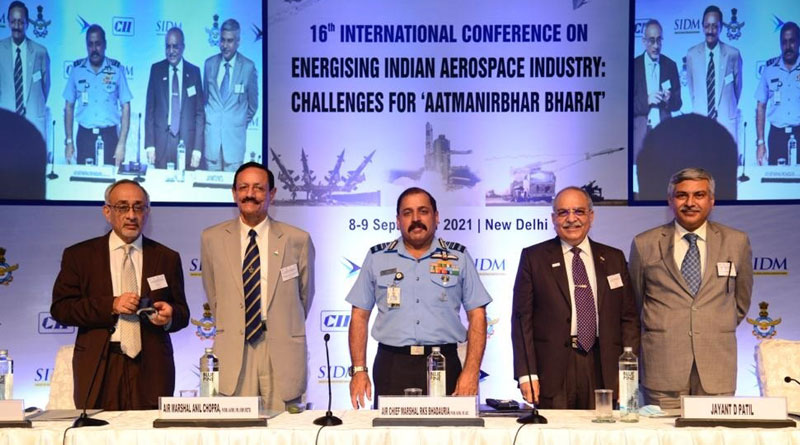 The 16th edition of the International Conference on Energising Indian Aerospace Industry sub-themed ‘Challenges for Aatmanirbhar Bharat’ started on 8 September. It is being held as a hybrid conference due to the prevailing Covid pandemic. This conference brings together government officials, serving armed forces officers, captains of industry (both Indian and foreign), MSMEs, academia and the users to discuss issues of concern for all stakeholders and arrive at recommended action points.

Air Chief Marshal RKS Bhadauria, Chief of the Air Staff delivered the inaugural address where he highlighted that the Aerospace industry is the critical part of the Aatmanirbharta or self-reliance and is a strategic necessity. He shared that the LCA has redefined military aviation and that the 40+83 Mk 1A will make the core of the aerospace industry in terms of budget and ecosystem. “The level of automation achieved by the support of the industry has given the strength to act fast, decide fast and react fast,” he said.  He conveyed that the Indian Air Force intends to procure 350 aircrafts over the next 2 decades including the LCA to energize the aerospace sector and that all efforts will be to procure from indigenous sources. He stressed on the need to make self-reliance the most important and strongest pillar of national security.

In his special address, President, SIDM, Jayant D Patil shared that the average defence budget, from the last 3 years reflects a growth of 12-13 percent and that INR 22, 000 crore of additional AONs have been granted to the Indian Industry.  He spoke about the Unmanned Aerospace sector and highlighted that development in this space would bring in a revolution in the aerospace industry which could catalyse the start-ups, provide boom in the markets and leapfrog indigenous capabilities.

The welcome address was delivered by Director General, Centre for Air Power Studies (CAPS), Air Marshal Anil Chopra. While describing the importance of self-reliance, he brought out how India needs to invest more in the aerospace sector to become a significant global player.

Director General, SIDM, Sunil Kumar Mishra in his opening remarks emphasised how in the past year the Aerospace and Defence industry has moved through catalytic policy and procedural changes in line with the vision of the Prime Minister to make India self-reliant. “To make ‘aatmanirbharta’ a success, it is imperative that all stakeholders connect, regularly, through forums and platforms to discuss, declutter and streamline the indigenization process through the prism of commercial and strategic viability”, he added.

Chairman SIDM Aerospace Committee, Satish K Kaura delivered the vote of thanks and said that the partnership between the IAF and the industry had strengthened over the years. He said that today’s flagship event aims to energise the domestic aerospace industry and give an overview of the potential opportunities that exist for them regarding the Indian Air Force.

The Conference involves seven sessions which are being held in Hybrid format (Physical and Virtual) and will cover aspects related to Capital and Revenue Procurement of IAF, the Indian Space Programme, Aerospace clusters, Road map for AMCA/FGFA and Positive Indigenisation Lists.

The Conference was attended by over physical 70+ delegates and 150+ Virtual delegates.