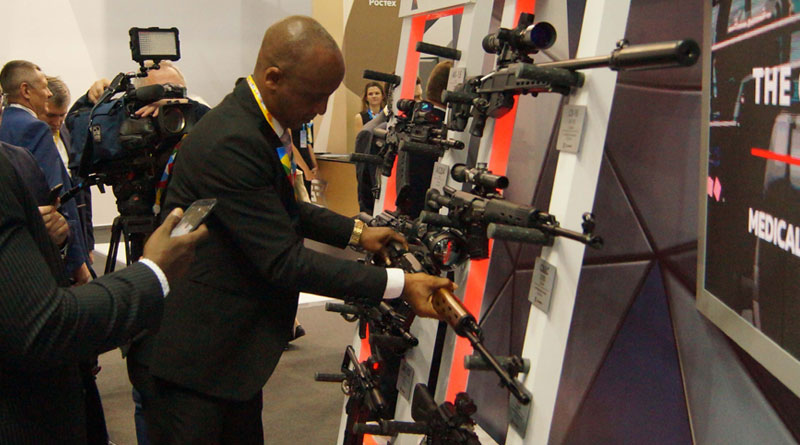 The Russian state-owned defence giant expects unprecedented defence partnerships with African nations at the Economic Forum, in Sochi from 23 to 25 October

Rosoboronexport JSC (part of the Rostec State Corporation) is actively participating in the Russia-Africa Economic Forum, which takes place in Sochi from 23 to 25 October, and coordinates the participation of Russian defence industry enterprises in it, the company has said.

“Rosoboronexport maintains military-technical cooperation with almost all countries of the continent and we are well aware of their needs. Our twenty African partners account for about a third of our order book, more than USD 14 billion, and this figure shows a growing trend. In 2019 alone, we held more than 20 meetings with top representatives of African countries and hosted about 30 African delegations at the ARMY and MAKS exhibitions. Their results suggest that Africa is very interested in Russian weapons, and we can offer our products to meet any contemporary challenge to security. Moreover, Rosoboronexport highly appreciates a reserved attitude of its African partners towards various anti-Russian sanctions, which makes the continent open to fair competition,” said Alexander Mikheev, Rosoboronexport’s Director General.


On the sidelines of the Russia-Africa Summit, Rosoboronexport said it will hold meetings with the senior officials of 15 countries. During the negotiations and within the framework of exhibition activities, the company will demonstrate to its trading partners from Africa the most up-to-date products for the armed forces and other law enforcement agencies of the countries of the continent, the company said.

Currently, many African States are implementing major programmes for restructuring their armed forces and equipping them to counter growing threats to security: terrorism, drug trafficking, organised crime, irregular migration. The company is putting on display its wide spectrum of advanced high-tech products developed and manufactured by Almaz-Antey Air and Space Defense Corporation, NPK Uralvagonzavod, NPK Techmash and Proekt-Technika Corporation at their stands in Sochi.

Rosoboronexport is showcasing scaled-down models of the most popular Russian military equipment on the African continent: the Yak-130 combat training aircraft, the Pantsir-S1 anti-aircraft gun/missile system, the Tor-M2KM SAM system and the Mi-171SH military transport helicopter.

In addition, equipment for outfitting army and special counter-terror units demanded all over the world is on display at the Company’s stand: Kalashnikov assault rifles, including the latest AK-200-series, GP-34 grenade launcher, Vityaz-SN submachine gun and sniper rifles, as well as ORSIS civilian and service weapons popular with police units.

“Rosoboronexport is now ready to develop cooperation with African partners on unique terms. We offer not only direct supplies of Russian defense products, but also the implementation of various infrastructure projects related to space activities, small arms and ammunition plants, as well as maintenance and repair facilities for all services of the armed forces,” Alexander Mikheev added.