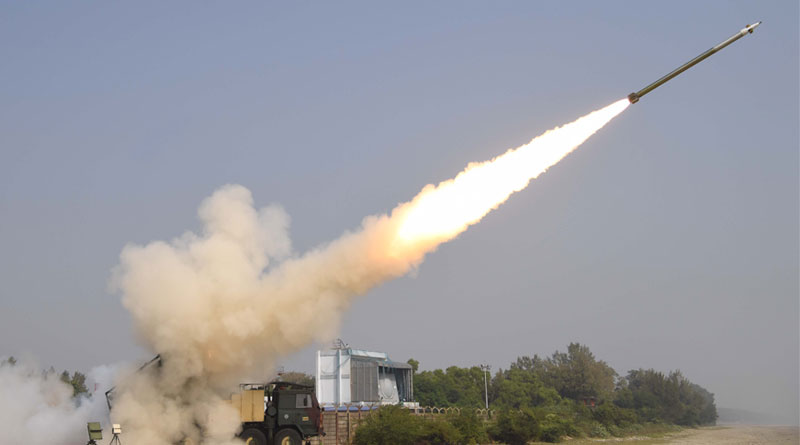 The mission objective of the latest trial was to test low range, functioning of live warhead along with its proximity initiation and salvo launch

As part of the series of flight trials of Pinaka missile system, two test firings have been conducted by Defence Research and Development Organisation (DRDO), a statement released by the defence ministry said on December 20. The first trial was conducted on 19 December 2019, wherein one missile was fired at 75 kilometre range. The second trial was successfully conducted December 20 at 1100 hrs from Integrated Test Range, Chandipur, off the Odisha coast, said the statement.

“The mission objective of today’s trial was to test low range, functioning of live warhead along with its proximity initiation and salvo launch. Two Pinaka missiles were launched in salvo mode with 60 seconds interval between two firings. Both the missiles were fired to engage a target located at 20 kilometre range and high accuracy was achieved. The missile was integrated with live warhead with proximity fuse and was tracked by multiple range systems viz. telemetry, radars, Electro-Optical Tracking System (EOTS), which confirmed the text book flight performance,” the statement from the Indian defence ministry said.


Earlier on December 19, Pinaka Missile System was successfully flight-tested from the Integrated Test Range, Chandipur off the Odisha coast. The Pinaka is an Artillery Missile System capable of striking into enemy territory up to a range of 75 kilometres with high precision. The Pinaka MK-II Rocket is modified as a missile by integrating with the Navigation, Control and Guidance System to improve the end accuracy and enhance the range. The Navigation system of the missile is also aided by the Indian Regional Navigation Satellite System (IRNSS).

Secretary department of defence R&D and chairman DRDO, G Satheesh Reddy, has congratulated the entire DRDO community for successful trials of the missile.