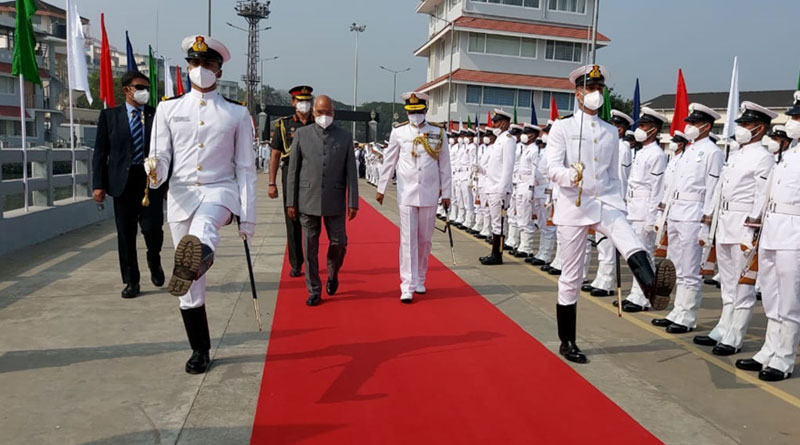 The President of India Ram Nath Kovind witnessed Naval Operations Demonstration in the Ernakulam channel, which showcased naval prowess and operations, on 22 December 2021. The President was accompanied by the Governor of Kerala Arif Mohammad Khan and Flag Officer Commanding-in-Chief Vice Admiral M.A Hampiholi.

The event which lasted for 40 minutes displayed the combat capability of ships and aircraft which included simulated beaching reconnaissance and assault, high speed runs by fast interceptor crafts, shore bombardment, helobatics, sonar dunk operations, boarding operations and cargo sling operations by naval helicopters. The highlights of the day were manning of the yard and arms of the Sail Training Ship ‘Tarangini’ along with steam past by Naval ships which manoeuvred in a column formation shouting three ‘Jai’ in the honour of the President. The event concluded with a band performance by the naval band and fly past by aircraft.

The President further visited the Indigenous Aircraft Carrier ‘Vikrant’ under construction at Cochin Shipyard Ltd., Kochi. This was his first visit to the ship. He was provided a first-hand brief on the progress of trials towards commissioning of the ship.

Indigenous content in construction of IAC is close to 76 percent of overall project cost of Rs 19,341 crores. IAC has large number of indigenous materials such as steel, besides other equipment manufactured by Indian industrial houses and about 100 MSMEs. The indigenous construction of the carrier has generated employment opportunities and bolstered plough back effect on the domestic economy. Close to 2000 shipyard and 13,000 non-yard personnel have been employed per annum towards construction of IAC.

After a brief walk around of the warship, the President expressed satisfaction on the progress and appreciated the efforts of Indian Navy and Cochin Shipyard towards development of indigenous capabilities in shipbuilding as a shining example of the nation’s quest for ‘Atma Nirbhar Bharat’.