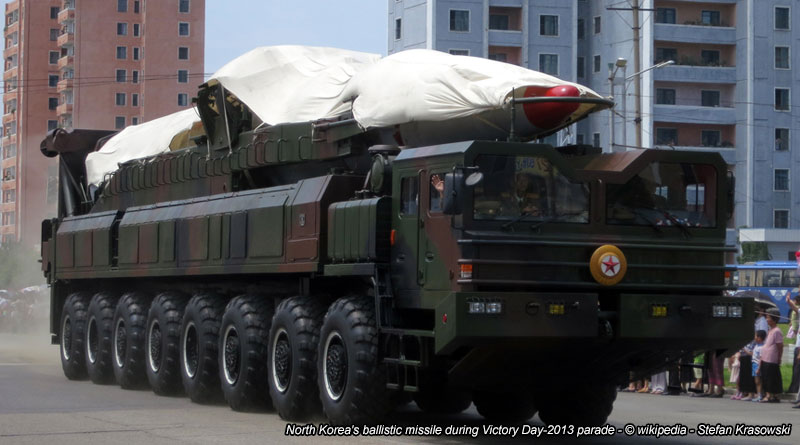 To meet these objectives it was decided to scale-up the existing capability, which included an improved Scud B missile called Hwasong-6 carrying 1,000kg to 500km. While this expedient was sufficient for the airframe and the warhead, the engine and guidance system provided a greater problem. To overcome this, North Korea sought covert assistance from Russia, Ukraine, China, and countries in Europe. It also secured the services of a small number of foreign missile designers, engineers and specialists. In May 1993, North Korea conducted its only known test of No-Dong from the Musudan-ri launch facility. Although a slow rate of production began in 1994, it was only in 1997 that the missile was fielded in sufficient numbers to become operational. No-Dong is a single stage, liquid fueled ballistic missile which has a close technical resemblance with Pakistan’s Ghauri-I missile which was first test fired on 6 April 1998, a little before India and Pakistan conducted their nuclear test series in May. The Ghauri-I can carry a 700kg warhead to 1,000km.

During much of the Nineties, North Korea was engaged in technical issues related to ballistic missiles, like multi-staging, engine design, guidance, and airframe design. Covert help again came from Russia, Ukraine, several European countries, and especially China. During this period, North Korean missile designers and engineers continued to regularly visit China. Sometimes around 1992, North Korea initiated two ambitious ballistic missile programmes, the No-Dong-II (also called Taepo Dong-I) and No-Dong-III (also called Taepo Dong-II). The important thing about these missiles was that they were two-stage rockets, a quantum jump from the earlier single-stage missiles. However, like the No-Dong, these missiles are also liquid fueled. In another development of consequence in 1994, the North Korean supremo, Kim II Song expressed a desire to establish a space programme and to launch an indigenous space launch vehicle to be called Taepo Dong-I SLV.

Even as the world was watching North Korea’s missile ambitions, the big surprise came on 31 August 1998. North Korea launched Taepo Dong-I SLV. Until now, North Korea was only known to have developed a two-stage ballistic missile capability. The third-stage and satellite capabilities came as a surprise to the world, indicating that the North Korean programme is further along the timetable in developing ICBMs than had previously been estimated.


It is evident that if North Korea continues to give high priority to its nuclear and missile programme (which it would), the future developments may likely include: more capable (that is, larger warheads and improved CEP) Hwasong class and improved No-Dong series missiles; solid fuel tactical ballistic missiles; and improved Taepo Dong-I SLV to be converted into an ICBM.

However, sending a space vehicle is not the same as an ICBM even as both use the same type of booster rockets and inertial guidance. Unlike an ICBM, after a space vehicle is launched, one can correct its orbit or trajectory by observing its velocity and position with powerful radars and then ordering it with radio signals to change its motion by selectively firing small jets on the space vehicle. In manned space travel, human operators can effect the necessary changes. Moreover, in space related activities, the launch of the rocket is often postponed, and last minute malfunctions are repaired. This will not be possible in the case of ballistic missiles carrying nuclear weapons that have to be launched quickly.