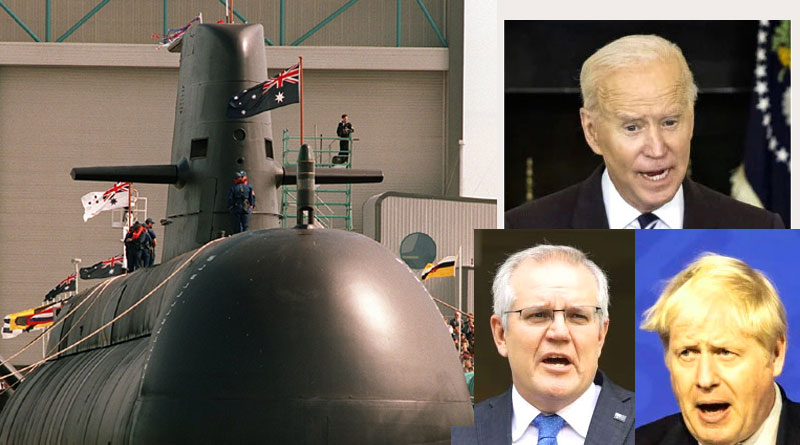 In a joint televised address on 15 September 2021, the US, UK, and Australia launched a new trilateral security alliance for the Indo-Pacific to protect their shared interests and allow for greater sharing of defence capabilities. The alliance is called ‘AUKUS’ and would include helping Australia acquire nuclear-powered submarines.

It is important to note that the US and Australia are both a part of the Quad alliance. However, the newly formed AUKUS alliance goes multiple steps ahead, which is why the trilateral formation has become a talking point among Indian experts. While the Quad’s primary objective is maritime security, combating the Covid-19 crisis, especially vis-à-vis vaccine diplomacy, addressing the risks of climate change, creating an ecosystem for investment in the region and boosting technological innovation as of now, the AUKUS looks like a more clearly outlined with sharing of cyber capabilities, AI, quantum, and other undersea technologies. Among the Quad, India and Japan have certain limitations in upping the ante against the neighbour, China due to security as well as trade and investment commitments. During the launch of AUKUS, the countries did not mention China, but spoke about the growing challenges in the Indo-Pacific.

Under AUKUS, the three countries will enhance the development of joint capabilities and technology sharing, foster deeper integration of security and defence-related science, technology, industrial bases, and supply chains.

The first major initiative under this alliance would be for Australia to build a fleet of nuclear-powered submarines with the help of the US and the UK.

“The UK, Australia and US are natural allies while we may be separated geographically, our interests and values are shared,” said British Prime Minister Boris Johnson. He added, “The AUKUS alliance will bring us closer than ever, creating a new defence partnership and driving jobs and prosperity. This partnership will become increasingly vital for defending our interests in the Indo-Pacific region and, by extension, protecting our people back at home.”

“The United States, Australia, United Kingdom have long been faithful and capable partners and we’re even closer today. Today, we’re taking another historic step to deepen and formalise cooperation among all three of our nations because we all recognise the imperative of ensuring peace stability in the Indo-Pacific over the long term,” US President, Joe Biden said.

Biden said AUKUS will bring together sailors, scientists, and industries to maintain and expand their edge and military capabilities and critical technologies such as cyber, artificial intelligence, quantum technologies, and undersea domains.

“Recognising our deep defence ties, built over decades, today we also embark on further trilateral collaboration under AUKUS to enhance our joint capabilities and interoperability. These initial efforts will focus on cyber capabilities, artificial intelligence, quantum technologies, and additional undersea capabilities,” read the joint statement issued by the three countries.

A Chinese foreign ministry spokesperson, Zhao Lijian, said the US and UK’s decision to export highly sensitive nuclear-powered submarine technology to Australia was a case of “extremely irresponsible” double standards. He added, “China will closely monitor the situation.”