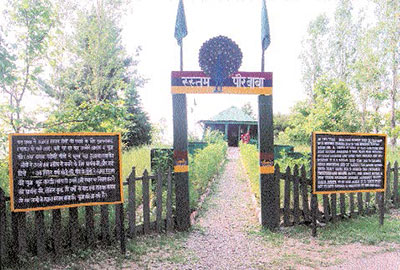 It was a bunker with a difference. While bunkers at this forward post overlooking the Lipa Valley in Pakistan look nondescript, this one had a bright green roof, making it quite conspicuous. Laughed one army major, “We deliberately painted it green to mislead the Pak Observation Post officer. They think that it is a Pir Baba and wouldn’t dare fire.”

Pakistani soldiers are not alone in their reverence for Sufis and saints. Both sides of the LoC are adorned with innumerable shrines devoted to various pirs. And it is not only the local people who come here for pilgrimage. The soldiers and the officers also hold them dear, so much so, that both sides avoid hitting at these shrines. Of course, accidents do occur, and then the troops repair the shrines on a priority. A commanding officer at one of the forward posts explained, “The troops revere these shrines partly out of respect for local traditions and partly because they have developed faith in these sufis.”

All across the Valley there is hardly any post at the LoC that does not have a Pir baba in the vicinity. In fact, at one such post, that overlooks Haji Pir in Pakistan, there is a shrine dedicated to Rustam Pir Baba. All visitors to the post are required to first stop here, pay their respects to the Pir, drape a chadar on the shrine and, only then climb the post. The purists may find the whole thing weird because the Rustam Pir shrine commemorates the place the Pir used to meditate on. He is not buried there. The legend goes that Rustam Pir disappeared one night. Nobody knows where he went. But such is the simplicity of faith that the shrine has a khadim too, who helps people and soldiers pray. And the prayer is not an ordinary one; it is steeped in immediate requirements. The khadim begins by reciting various verses from the Quran, but concludes by saying in chaste Urdu that, “Lord, if there can be no peace then at least protect the soldiers from the enemy firing. Keep their families happy and at peace so that the soldiers fighting inclement weather and unpredictable enemy are not troubled by domestic hassles. Amen”


Said one colonel, “A soldier is always closer to God than other people. He draws his strength from his faith.” What he did not say was that a soldier is also closer to death than most people. Hence, anything that offers hope of life, of victory, of peace is held sacred. Hence, faith in Pir babas is not enough. Each post has a temple of its own with a priest. It is customary for all visitors to offer a brief prayer there.

The Line of (no) Control

In July 2003, FORCE editors Pravin Sawhney and Ghazala Wahab travelled along the
Line of Control to get a sense of life in the line of fire. This was before the ceasefire.
16 years later, we seem to be back in those times.
So that we don’t forget what life meant without the ceasefire,
we are reproducing that article

Such is the faith of the troops that throughout the line of control, both officers and jawans abstain from liquor and nonvegetarian food on Thursdays, the day held sacred by the Sufis. The soldiers posted close to Rustam Pir Baba do not indulge in alcohol at all on any days of the week. Ironically, the local Muslims partake of non-vegetarian even on Thursdays because their religion imposes no such conditions. Since last year, a few units have gone to the extent of organising the annual Urs at one of the shrines where people come by hordes.

Islam came to Kashmir through wandering minstrels and Sufis. Hence here, particularly in the mountains close to the LoC, it has retained its simplicity of belief. Even those who can’t even read the Quran come to these shrines both for prayer and thanksgiving. And it is this faith that gives strength to the locals who stays here despite incessant gunfire and the soldier who keeps a solitary vigil at night with only God by his side.

The message was cryptic, and serious enough to ruffle ordinary people. But the commanding officer at the sensitive Indian post at the height of nearly 10,000 feet had seen worse. One of the routine Pakistani shells had missed its target. Nothing unusual about it, except that it fell on a village house, seriously injuring four unsuspecting villagers: three adults and one boy.

One thought on “Keep the Faith”