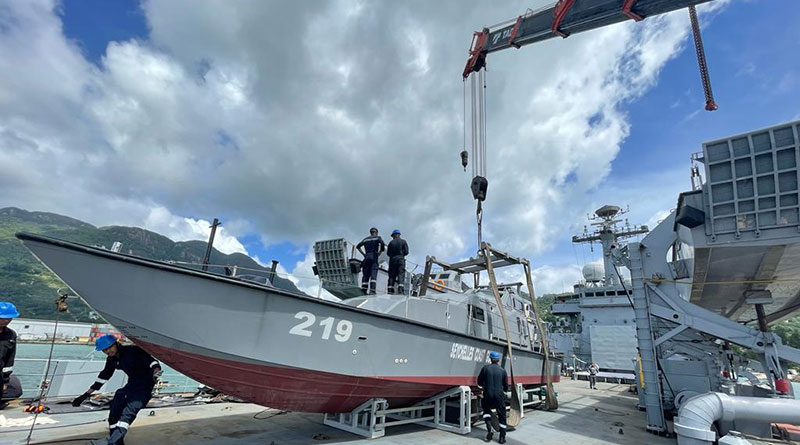 As part of the ongoing deployment of Indian Naval Ship Gharial in the South-West Indian Ocean, under Mission SAGAR IX, the Ship called at Port Victoria, Seychelles from May 11 to 14.

Following up on the proposal received from the Government of Seychelles earlier, three ceremonial Saluting Guns, with ammunition, were delivered by the Ship to the Seychelles Defence Forces (SDF). These were formally presented by Gen. Dalbir Singh Suhag (Retd), High Commissioner of India to Seychelles to Brigadier Michael Rosette, the Chief of Defence (CDF), SDF in a solemn ceremony held onboard INS Gharial on 13 May.

During the stay of the Ship at Seychelles, the Indian Navy facilitated the training of SDF personnel in domain-specific maritime disciplines.

The Navy said in a press statement, “Coming close to the recent official visit of Chief of the Naval Staff, Admiral R Hari Kumar to Seychelles from April 21-23, the activities undertaken during the port call of INS Gharial, amply demonstrate the commitment of Indian Navy in making a positive contribution to capacity building and capability enhancement efforts of the Seychelles Defence Forces.”

Before calling at Port Victoria, the ship had also visited Colombo, Sri Lanka and Male, Maldives to deliver essential medical supplies. Successive deployments of the Indian Navy under Mission SAGAR are aligned with the vision of Security And Growth for All in the Region and strengthen the concept of ‘Collective Responsibility’ for maritime security in the Indian Ocean Region.