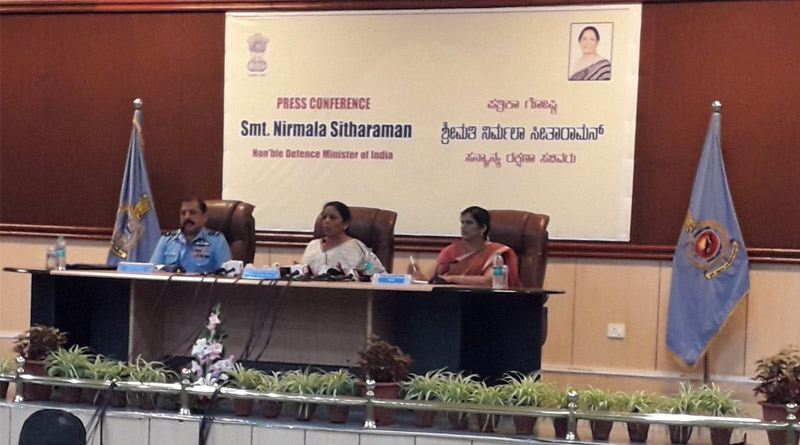 In a press conference, defence minister Nirmala Sitharaman replied to allegations that HAL was losing jobs because of the Rafale deal

Hitting out at the Opposition, defence minister Nirmala Sitharaman asserted that the government was not taking jobs away from state PSU Hindustan Aeronautics Limited (HAL), by ignoring it over the Rafale deal.

In a press conference at the Air Force Station Yelahanka, she accused the Opposition of ignoring Indian Air Force’s needs. Lashing out at them, she said, “You (Congress party) have not done anything for HAL and you are alleging that we have taken away jobs by ignoring HAL?”

Replying to a question on Opposition’s allegations that HAL was losing jobs, Sitharaman said that, “Congress party created the HAL. What did they do all these years? Why are they suddenly shedding crocodile tears for HAL?”

When questioned about HAL’s incompetence in delivering the Light Combat Aircraft on time, the defence minister said that the Centre was looking into what was holding back HAL from manufacturing more LCA Tejas aircraft. She added that it was the NDA government which was working with HAL to ramp up its Tejas production from eight to 16 aircraft a year.

Pointing out that the opposition did not even help HAL to manufacture Dorniers in the state of Uttar Pradesh, Sitharaman added that “this is where the first family of Congress resides.” Finally accusing the Opposition of mishandling the Rafale deal, she said that “we have achieved a better deal than the UPA.”

Referring to the surgical strikes that took place in 2016, the defence minister said the anniversary was being celebrated as ‘Parakaram Parv’ as surgical strikes “are nothing to be ashamed about.”

One thought on “MoD “Not taking jobs away from HAL””