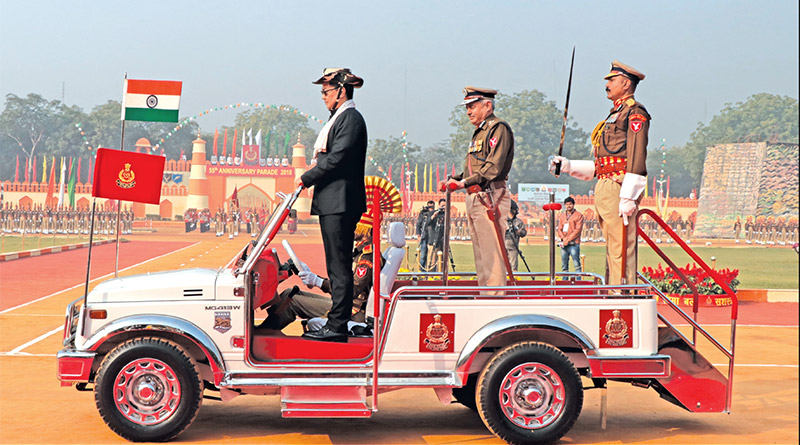 Celebrating its 55th anniversary, Sashastra Seema Bal (SSB) displayed a splendid show with an impressive parade and delightful demonstrations on December 24. The eight decorated marching contingents marched past the saluting base with great vigour and pride. The grand campus of 25th Battalion, Ghitorni, New Delhi, was jubilant as Union minister of state for home affairs, Kiren Rijiju, inspected the parade along with Director General, SSB, Surjeet Singh Deswal and thereafter, as the chief guest, he took the salute of the marching contingents.

The highlights of the function included a magnificent marchpast of the nine decorated contingents drawn from all the frontiers of SSB and included three special contingents of special ops, women contingent and the canine squad, this was followed by an inspiring speech by the chief guest. This was followed by felicitation of three recipients of the President’s police medal and 22 recipients of the Indian Police Medal for 2018 and awards to SSB battalions and frontiers in recognition of their outstanding performance in the sphere of border guarding duties were also given. Thereafter, the audience was entertained by SSB’s daredevil team and the adorable yet disciplined dog squad. The energetic displays of Thang ta, Tao lu, Sepaktakraw and Mountaineering mesmerised everyone present in the viewers’ gallery.


Rijiju in his address appreciated the discipline, swiftness and synchronisation shown by the SSB’s men and women marching contingents and admired the professional functioning of SSB on the friendly borders of India with Nepal and Bhutan. The chief guest also commended SSB for operationalising all its 73 sanctioned battalions and other formations within time and congratulated the force and its personnel for their operational achievements in the field of seizures and apprehensions. Rijiju highly commended SSB’s 18 Rescue and Relief teams as first responders during calamities and the achievements of SSB’s sport persons of winning more than 700 international medals.