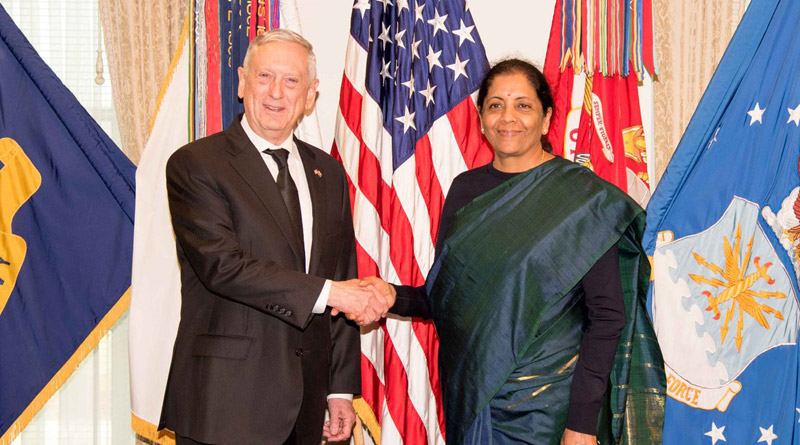 Following defence minister Nirmala Sitharaman’s current visit to the United States, both India and the US have agreed to accelerate their defence and security ties. Nirmala Sitharaman’s American counterpart, defence secretary James Mattis described India as a ‘stablising force’ across the Indo-Pacific while reviewing ongoing initiatives to further strengthen bilateral cooperation. Terming the same as a ‘key pillar’, secretary Mattis had welcomed Sitharaman on December 3 at the Pentagon for the fourth set of talks between the two this year.

“The United States and India, in Prime Minister Modi’s words, have overcome hesitations of history, carrying forward the legacy of friendship and making clear there is no contradiction between strategic autonomy and strategic partnership,” Mattis said.

An official statement released by the Ministry of Defence said that the two leaders discussed the growing partnership between India and US in the defence sphere and also exchanged views on a broad range of bilateral and international issues of mutual interest.

“They reviewed ongoing initiatives to further strengthen bilateral defence cooperation as a key pillar of the strategic partnership between India and the US,” it said. “Both sides agreed to further strengthen bilateral defence cooperation, building on the discussions and outcomes of the ‘2 + 2 Dialogue’ held in September 2018,” the statement added


Defence secretary James Mattis said that the ‘2+2’ dialogue also made clear the commitment of India and the US to further bolster their defence partnership. “Today, we build on that momentum as we work to implement our agreement from September, Communications Compatibility and Security Agreement (COMCASA),” he added.

During the dialogue, the two nations signed the COMCASA that allows India to receive advanced US military hardware.

Calling the ‘2+2’ dialogue meeting in September as a landmark event, Nirmala Sitharaman said it set the stage for strategic consultations between the two countries. The bilateral meetings during the dialogue in New Delhi and other meetings, including the one in Singapore in October, were “indeed positive and productive”, she said.

Secretary Mattis also expressed confidence that India and the United States would be able to resolve all issues related to India’s purchase of the S-400 air defence systems from Russia that could draw possible US sanctions. India risked being imposed with CAATSA (Countering America’s Adversaries Through Sanctions Act) when it recently signed the deal to buy the S-400 air defence missile system. CAATSA deals primarily with countries having “significant transactions” with Russia, North Korea or Iran. Russia’s S-400, a long-range surface-to-air missile defence system, was ordered by India this year in October. India needs a presidential waiver to get around the punitive CAATSA sanctions. “We will work everything out. Trust me,” said secretary Mattis.