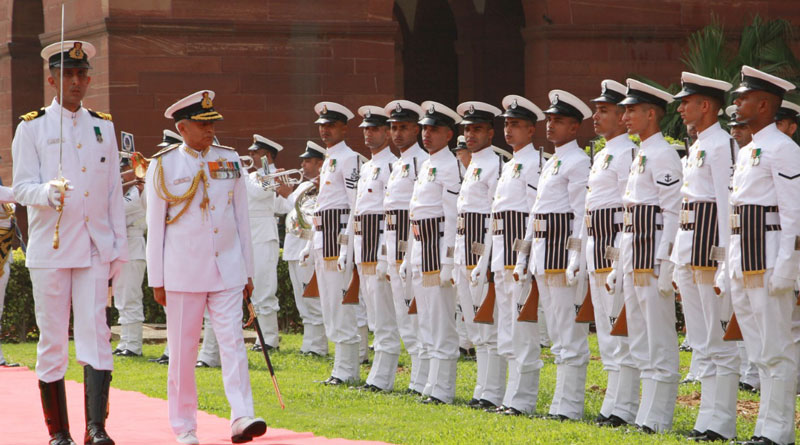 Admiral Sunil Lanba, PVSM, AVSM, ADC, Chief of the Naval Staff will relinquish command of the Indian Navy as the 23rd CNS on completion of his tenure and retirement from service on 31 May 2019, after over four decades of distinguished service.

An alumnus of the National Defence Academy, Khadakwasla, Defence Services Staff College, Wellington, College of Defence Management, Secunderabad and Royal College of Defence Studies, London, the Admiral’s career has been enriched with vast experience at sea as well as in operational, training and tri-services appointments. Prior to being elevated to the Flag rank, Admiral Lanba was deeply engaged with professional training, shaping future leadership and skilling of the officers of the Indian Armed Forces.


During his tenure as the CNS, Admiral Lanba set the tone for several transitions in operational, training and organisational philosophy of the Indian Navy. The Mission Based Deployments introduced in June 2017 transformed the operational philosophy to deploying mission-ready ships and aircraft along critical sea lanes of communications and choke points. These deployed ships are always ready to meet any eventuality across the spectrum of operations ranging from acts of maritime terrorism and piracy to HADR. The Mission Based Deployments enabled Indian Naval units to be the first responder in crisis situations and showcased Indian Navy as the main instrument in India becoming a Net Security Provider in the Indian Ocean Region.

Admiral Lanba has also steered implementation of the new transition cycle which facilitated improvement of the overall readiness of ships and submarines in undertaking operational tasking and Mission Based Deployments. This transition saw considerable improvement in combat efficiency and crew proficiency of ships, resulting in overall improvement of Op Logistics, spares management and forecasting refit planning and expenditure management.

The Admiral’s tenure saw Indian Navy’s Foreign Cooperation initiatives becoming a ‘key driver’ to propel ‘India’s Defence Diplomacy’ to greater heights in the Indo-Pacific. Accordingly, as part of IN’s Capacity Building initiatives, the IN facilitated provision of a record number of naval assets to various IOR littorals and has also established itself as the preferred destination for niche training in the field of submarine, aviation and asymmetric warfare.

The IN also initiated forums for meaningful interactions at various levels; this includes the Sea-Rider programme for Junior Officers, Exercise SAMBANDH and Regional Maritime Security Course for mid-level Officers, and Goa Maritime Conclave for Chiefs of Navy, all of which have elevated our Foreign Cooperation engagements with our Friendly Foreign Countries.

His tenure has seen the reinvigoration of our multilateral engagements, in that we celebrated the 10th Anniversary of the IONS construct, took over as co-Chair for the IONS Working Group on Information Sharing and Interoperability, ratified the ‘IONS Guidelines for HADR’, conducted the first MILAN Exercise at Sea off Port Blair in Mar 2018 and also concluded several Operational and Logistics agreements with Friendly Foreign Countries.

Under his command, the Indian Navy examined and put into place a series of measures under the ‘Make in India’ initiative of the Government and also recommended ways to further indigenize defence procurements in order to overcome major challenges being faced therein. 49 ships and submarines are currently under construction in Indian shipyards, including the first indigenous aircraft carrier ‘Vikrant’.

The ‘Indian Naval Indigenisation Plan 2015-30’ lays down the Navy’s plans for the next fifteen years which allows for Industry to formulate strategies to meet the requirements of the Navy through the new Strategic Partnership Model, notified in May 2017, as well as domestic R&D. These initiatives are aimed at enhancing indigenous defence industrial capability extending up to the Micro Small and Medium Enterprises.

In consonance with the Government’s digital vision, the Admiral’s tenure saw the launch of a new Digital Library available pan-Navy for knowledge management and retrieval including archiving of critical data and information. This was complemented by security and hardening of naval data networks in keeping with contemporary cyber security practices. In keeping with the Navy’s ethos of harnessing niche technologies, concrete plans to incorporate Big Data Analytics and Artificial Intelligence into the Navy’s operational functioning have also been formulated.

The Admiral’s tenure also saw the Navy undertake ‘Functional Re-Organisation of Indian Navy towards improving Operational Efficiency’ and ‘Optimal Manning’. Towards this a strategy aimed at enhancing administrative efficiency in the Navy and achieving Optimal Administrative support, as the desired end state was promulgated in April 2019. Under this, the need for greater empowerment of Base Depot Ships has been envisaged which would greatly improve upon the Vital, Essential and Desirable elements of Administration in the Navy.

These Administrative reforms and transformation intend to bring visible improvement in the quality of life and enhance satisfaction levels of personnel which would act an enabler for developing motivated and committed teams. This is a reinforcement of the tenet that ‘human resource measures and sound administration’ have been, and will always be, amongst the key enablers of Operational Effectiveness.