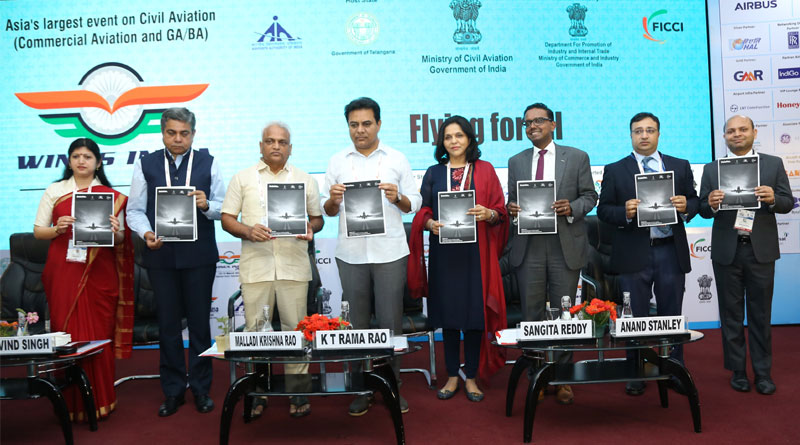 Under the UDAN scheme 48 new airports have been operationalized, in addition to these 100 more airports will be added in the next 5 years

The Indian aviation industry came together to work towards making ‘Flying for All’ a reality on at ‘Wings India 2020’.

“The Indian Aviation and Defence ecosystem has witnessed a significant growth trajectory in the past few years. Telangana is the first state in India to take the union government’s advice to slash VAT on the aviation turbine fuel from 16% to 1%, this has given significant boost to the regional airline industry prompting leading operators to expand their operational base in Hyderabad. In line with the theme of ‘Wings India 2020’, we are now planning to re-activate old airports and airstrips, create 3 greenfield and 3 brownfield airports, and also establish a chain of heliports to connect the remotest parts of our state,” K.T. Rama Rao, Minister for Industries & Commerce, IT, Electronics & Communications and Municipal Administration & Urban Development, Government of Telangana, said at the inaugural session.

Joint Secretary, Ministry of Civil Aviation, Government of India Usha Padhee said, “India is poised to become the epicentre of growth for this sector. Civil aviation is extremely important for any developing economy, it is not only a beneficiary for good economy but also an enabler for growth of the economy. Every entity in the civil aviation ecosystem has to work in tandem, almost in perfect coordination to make sure air traffic is safe and secure. ‘Wings India 2020’ is a platform for us to come together to work towards ensuring the growth of the sector.”


FICCI-MoCA- Deloitte ‘UDAN 4.0+ knowledge paper on the changing landscape of Indian aviation sector under regional connectivity scheme’ was also released during the event.

The executive summary of the report is as follows. Impact of UDAN led to the start of air connectivity in Arunachal Pradesh, Haryana and Sikkim. Capex initiated many non-operational airports that attracted UDAN route bids and new airlines started, primarily focusing on regional air connectivity

Some of the challenges of UDAN are non-readiness of the airport has impacted the timely operationalisation of routes. Many UDAN routes have low passenger count and hence can only support smaller aircraft with high operational costs. The detailed report is scheduled to be released later.

“The rapid expansion in India’s airport and air navigation structure will definitely fuel the huge business and tourism opportunities in our great country. Indian aviation will be the epicenter of the growth trajectory and will present a whole range of opportunities and challenges and such industry initiatives like “Wings India 2020’ are path breaking,” said Arvind Singh, Chairman, Airports Authority of India.

Dr Sangita Reddy, President, FICCI and Joint MD of Apollo Hospitals Group, said “A scaled-down version of #WingsIndia2020 was conducted with only B2B conference & the public display was cancelled. With necessary precautions of screening public with the scanners, hand sanitizers, distancing & the use of Namaste, we seem to be effectively showing the way of how one can conduct a safe conference and strike the right balance.”

The day also hosted a panel discussion on ‘Capacity Building- Airlines and Airports’ which saw active participation of global CEO’s and industry experts.

Consulting & Advisory moderated the session emphasizing on how airports and the government together are finding opportunities to develop and support airlines.

FICCI in corporation of Ministry of Civil Aviation, the Indian Government has been organising the series of India Aviation for Aviation promotion activity since 2007.

FICCI organised first edition of Wings which were the largest exhibitions on Civil Aviation sector organized in the country, jointly with the Ministry of Civil Aviation, Government of India.