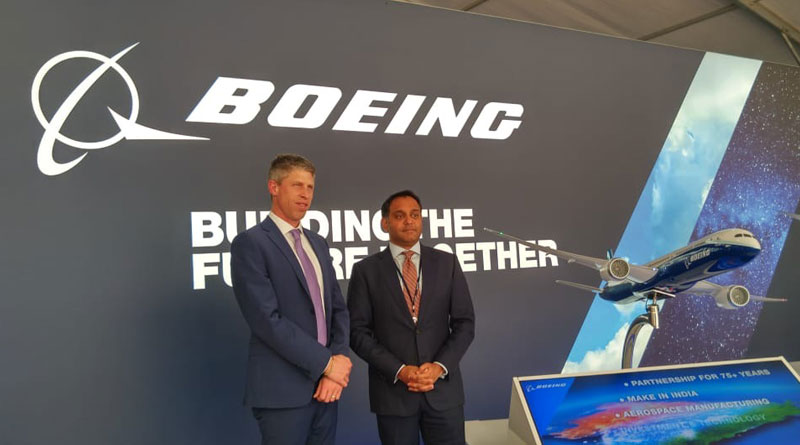 Boeing is working with the Government of India to pursue the development of sustainable aviation fuels. The longest 10 non-stop routes from India are flown in Boeing aircraft.

Boeing, whose customers in India include Air India, SpiceJet, Vistara and cargo operator Blue Dart, demonstrated its commitment to India and its developing defence ecosystem by showcasing various commercial platforms, and services, including the 787 Dreamliner and 777X, at four-day Wings India 2020 in Hyderabad.

In terms of modernising India’s Aerospace, Boeing utilises methods such as machine learning, simulation and modelling, advanced forecasting and predictions, artificial intelligence, statistics, network analysis and pattern recognition. The company has a full suite of digital and data management tools, powered by Boeing AnalytX identifies efficiencies that improve operations and mission readiness for commercial and government customers. In collaboration with Airports Authority of India, airports and airline partners, Boeing is working to create a roadmap to modernise and optimize India’s National Airspace System to safely accommodate this traffic growth.

Through its skilling initiatives, Boeing is training hundreds of pilots, aircraft maintenance engineers, technicians and frontline factory workers across India with their industry partners like Tata, Rossell Techsys, Jaivel and Lakshmi Machine Works.


The Accelerated Apprenticeship Program launched in collaboration with Air India Engineering Services Limited and the Ministry of Civil Aviation, aims to increase the employability of aircraft maintenance engineers. The first batch graduated in August 2019 and were all employed with leading Indian carriers. The second batch is currently underway. The longest 10 non-stop routes from India are flown in Boeing aircraft.

The annual Boeing-IIT National Aeromodeling Competition for engineering universities has been designed to inspire the next generation of talent and encourage them to opt for careers in aerospace. The sixth edition, held in 2019, featured over 1,000 students from over 250 institutions across India.

Boeing has been a long-term partner contributing to the growth of the Indian aerospace ecosystem, and bringing the ‘best of Boeing to India and the best of India to Boeing’. India’s Make-In-India initiative is core to its business strategy with six key enablers that are essential to Boeing’s success: world-class infrastructure, a thriving Indian supplier base, innovation, support and sustainment, engineering talent development and skills advancement in the country. According to the statement, Boeing investments in India are bolstering aerospace sector, creating jobs and driving innovation.

It is also working with Ministry of Civil Aviation to implement a framework for innovative leasing and financing models that can be used by airlines to scale up operations. It is further working towards optimising cockpit solutions for Indian airlines that includes crew rostering and pairing. ForeFlight Dispatch was recently added to Boeing’s digital toolbox, providing a powerful team flight planning component through its ForeFlight Mobile web application. ForeFlight Dispatch creates a more efficient and productive flight operation environment by delivering multi-user, mobile flight planning capability for operations of any size.

Boeing’s sourcing from India stands at over USD1 billion a year from over 200 suppliers who are manufacturing high-end systems and components for some of Boeing’s most advanced products as part of its global supply chain. These include critical components such as aero structures, wire harness, composites, forgings, avionics mission systems and ground support equipment.

Moreover, key partnerships include: TAL Manufacturing Solutions delivered the 25,000th Advanced Composite Floor Beam (ACFB) last year for all the Dreamliner airplane variants. Bharat Forge manufactures a range of titanium forged parts such as forgings for the 777X. Hyderabad-based Cyient has supported a number of critical design-engineering projects for Boeing airplanes and currently provides design and stress support on the 747-8 Freighter and the 787. Tata Boeing Aerospace Limited (TBAL) in Hyderabad produces the 777 uplock boxes. Boeing’s joint venture with Tata in Hyderabad, TBAL marks a major step towards the co-development of integrated systems in Indian aerospace and defence.  TBAL has been producing aero-structures for Boeing’s AH-64 Apache helicopter, including fuselages, secondary structures and vertical spar boxes for international customers. TBAL employs over 500 engineers and technicians, and represents the future of India as a global exporter of aerospace products.

According to the press statement issued by the company, the partnership between India and Boeing has grown from strength to strength over the last 75+ years, with 3,500 people in India, and more than 7,000 people working with its over 200 supply chain partners.

Boeing forecasts India to be the third largest global market for commercial fleet. The US aerospace major forecasts air carriers in India will need ~2,500 new commercial aircraft by 2040. Boeing supplies advanced aircraft and services to airlines in India to support the exponentially growing Indian commercial aviation sector. It recently delivered the first Dreamliner 787-9 out of an order of six to Vistara. Its family of commercial airplanes like 787 Dreamliner and 777X are redefining flying experience for passengers. The company is fostering technology and innovation in aerospace from India, for the world through its Boeing India Engineering & Technology Centre (BIETC). The in-country teams provide engineering design, software development and testing, and technical authoring and learning content development services to support the global fleet of Boeing commercial and defence aircraft.

“Boeing designed the 787 family with superior efficiency, which allows airlines to profitably open new routes to fly people directly where they’d like to go in exceptional comfort.”

The Boeing 787 Dreamliner is an all-new family of commercial airplanes that brings big-jet ranges and speed to the middle of the market. The company maintains that 787 family is delivering unmatched fuel efficiency to its customers. With 20 to 25 percent less fuel and 20 to 25 percent fewer emissions than the airplanes they replace, the 787 family has saved 48 billion pounds of fuel since entering service in 2011 (projected savings versus replacement airplanes). The 787-8 Dreamliner can fly 248 passengers up to 7,305 nautical miles (13,530 km) in a typical two-class configuration. The 787-9, a stretch of the 787-8, can fly 296 passengers 7,530 nautical miles (13,950 km) in addition to more cargo, allowing airlines the ability to grow routes first opened by the 787-8. The third and longest 787, the 787-10, can fly 336 passengers up to 6,345 nautical miles (11,750 km). The key to the “exceptional” performance of the 787 family is its suite of new technologies.

Some of the salient features that the company states about 787 Dreamliner are: The largest windows of any jet; air that is cleaner, more humid and at a higher pressure for greater comfort; large overhead bins with room for everyone’s bag; soothing LED lighting; and technology that senses and counters turbulence for a smoother ride. Composite materials make up 50 percent of the primary structure of the 787, including the fuselage and wing. On-board diagnostics systems allow the airplane to self-monitor and report systems maintenance requirements to ground-based computer systems.

The design and build process of the 787 family has added further efficiency gains. Boeing and its supplier partners developed new technologies and processes to enhance efficiency. More than 50 of the world’s most capable top-tier supplier partners bring innovation and expertise to the Boeing 787 Dreamliner family. These suppliers have been involved since the early detailed design phase of the program and are connected virtually at more than 130 sites around the world, the statement added.