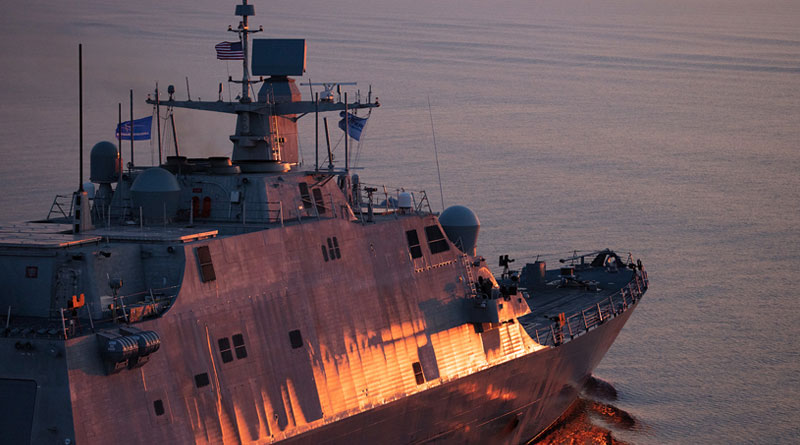 Sensor solutions provider HENSOLDT Inc., Vienna, Va., has successfully installed the first two of its TRS-4D naval radars aboard the U.S. Navy’s “Freedom” Variant Littoral Combat Ships (LCS), the company announced on August 22. The statement by HENSOLDT said that after passing acceptance trials on Lake Michigan without issue, the radar on-board LCS 17 (Indianapolis) was delivered by Freedom Variant LCS prime contractor, Lockheed Martin, to the US Navy. The second radar has been installed aboard LCS 19 (St. Louis) and is preparing for acceptance trials.

“System characteristics of the TRS-4D are an excellent match for the environment LCS faces,” says the managing director of HENSOLDT Inc. Ken Loy. “The radar’s AESA technology delivers increased sensitivity to detect smaller targets with greater accuracy, as well as faster track generation to give LCS more time to react to advanced threats,” he added.


The TRS-4D (recently designated by US Navy as AN/SPS-80) radar for LCS is a rotating version of the Active Electronically Scanned Array (AESA) fixed panel TRS-4D radar currently going aboard the German F-125 frigates. The TRS 4D will be the first AESA rotating radar aboard a US Navy ship. Currently, 8 TRS-4D are under contract for the Freedom Variant LCS. Six of them have passed factory acceptance. The new radar combines mechanical and electronic azimuth scanning to achieve fast generation of target tracks. This software-defined radar is programmable by the customer, enabling changes to radar characteristics to match future threats that evolve over the life of the ship. The ability to customise the characteristics of the TRS-4D radar enables designers to maximize the inherent modularity of LCS variants to best suit a specific LCS configuration.

Littoral combat ships are fast, agile surface combatants optimised for operating in the highly trafficked near-shore regions of the world. Through its innovative modular design, LCS can be reconfigured for surface warfare, anti-submarine warfare, and mine countermeasures in the near term, and adapt its capabilities for changing threats and scenarios that will occur over its service life.