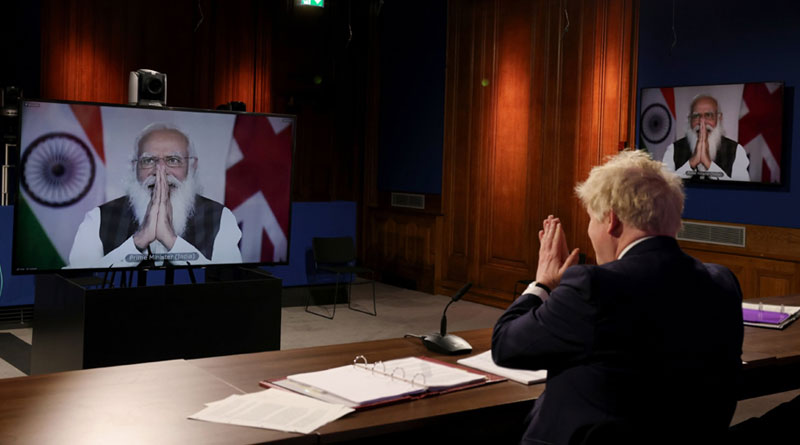 In a virtual summit, India’s Prime Minister Modi and British Prime Minister Johnson on 4 May, set out a shared vision for the UK-India defence partnership and agreed to advance the relationship to a new level, with a particular focus on maritime and industrial collaboration.

The leaders reaffirmed the benefits of closer co-operation in a free and open Indo-Pacific, recognising their shared interest in regional prosperity and stability. They agreed to significant new cooperation on Maritime Domain Awareness, which includes new agreements on maritime information sharing, an invitation to the UK to join India’s Information Fusion Centre in Gurgaon and an ambitious exercise programme which includes joint tri-lateral exercises.

The two countries are also working to conclude a Logistics Memorandum of Understanding that will enhance the joint ability to tackle shared challenges.

In addition to commitments on the Indo-Pacific, the India and the UK agreed to build on existing government-to-government collaboration on India’s future combat air engine requirement.  As part of a ‘2030 Roadmap’, they agreed to work closely together in support of India’s indigenous development of the Light Combat Aircraft Mark 2. They also spoke of the potential for further industrial collaboration in areas like maritime propulsion, space and cyber, marking the start of a promising new era of UK-India research, capability and industrial collaboration on Indian combat air and beyond. The Roadmap includes commitments to-

During their meeting, the Prime Ministers undertook to work closely together in support of those values, including at next month’s G7 in Cornwall, which India is invited to as a guest nation.


Over the last week British business, civil society and the wider public have demonstrated the strength of the relationship between the UK and India by donating much-needed medical supplies to the country. During their call the Prime Minister and Prime Minister Modi agreed to continue to work together on the shared fight against coronavirus. They pointed to the Oxford-AstraZeneca vaccine, currently being produced by India’s Serum Institute, as an example of the power of UK-India cooperation.

Prime Minister Boris Johnson said, “The UK and India share many fundamental values. The UK is one of the oldest democracies, and India is the world’s largest. We are both committed members of the Commonwealth. And there is a living bridge uniting the people of our countries.

“In the last week the British people have stepped up in their thousands to support our Indian friends during this terrible time in a demonstration of the deep connection between the UK and India.

“This connection will only grow over the next decade as we do more together to tackle the world’s biggest problems and make life better for our people. The agreements we have made today mark the beginning of a new era in the UK-India relationship.”

British High Commissioner to India Alex Ellis said, “The scope of the 2030 Roadmap makes absolutely clear how much the UK and India can and must do together.

This is a defining moment in the UK-India partnership, as we look to rebuild from the economic and health impacts of Covid-19, and lay the foundations for a secure and prosperous decade”

India’s Hindustan Aeronautics Limited (HAL) and Rolls Royce to move aspects of the manufacture of the MT30 Gas Turbine engine to India, supporting PM Modi’s Make in India initiative. The MT30 is an engine employed widely in navies around the world and is the basis of the UK’s Integrated Electric Propulsion system that powers the Queen Elizabeth Class Carriers.

This MoU will help in establishing packaging, installation, marketing and services support for Rolls-Royce MT30 marine engines in India. Through this MoU, Rolls-Royce and HAL will expand their long-standing partnership in India and work together in the area of marine applications for the first time.

CMD, HAL  R Madhavan, said, “Rolls-Royce has been our valued partner for several decades. We now look forward to working together to explore business opportunities in marine applications. This partnership will leverage the rich experience of HAL’s IMGT Division that works on marine gas turbines with Indian shipyards. Further, we are also exploring the option of using MT7 marine engine on the hovercraft being planned by the shipyards in India.”

President, Rolls-Royce India and South Asia , Kishore Jayaraman, said, “We are excited to bring together Rolls-Royce’s experience of over five decades in developing naval propulsion solutions and HAL’s in-market expertise in working with marine gas turbines to support our MT30 engines. We look forward to building on this partnership to provide solutions in the area of naval defence.”

Further, speaking about the partnership President, Rolls-Royce Defence, Tom Bell said, “Rolls-Royce has a shared history of successful collaboration with HAL in defence aerospace, and we are proud to strengthen our valued partnership to work together for the MT30 naval gas turbine. As India focuses on its vision of modernisation and self-reliance in defence, we look forward to introducing the MT30 to customers in India in collaboration with HAL. Designed for naval platforms of the future, the MT30 is perfectly equipped to meet the Indian Navy’s present and future needs.”

MT30 is a power-dense, best-in-class naval gas turbine currently in-service with naval programs worldwide in various propulsion arrangements across seven ship types. Derived from the Trent aero engine family, the MT30 has the potential to provide next-generation capabilities to the Indian Navy’s future fleet. The MT30 can deliver its full power of up to 40 MW in ambient temperatures up to 38 degree Celsius, without any power degradation throughout the life of the ship.

Earlier this year at the Aero India 2021 show, the two companies also announced new partnerships in the aerospace sector, including a MoU to establish an Authorized Maintenance Centre at HAL for Adour Mk871 engines to support international military customers and operators. They also announced their intent to expand their supply chain partnerships for Civil and Defence Aerospace, by working towards making Adour Mk871 engine parts in India, as well as supplying forgings such as shrouds, cases and seals for Rolls-Royce’s Pearl 15 and Trent family of engines.

UK Minister for Defence Procurement, Jeremy Quin MP, said, “The UK and India enjoy a strong defence and security relationship. We remain committed to close collaboration with India as we both adapt to meet future threats and look to innovate our defence equipment programmes and systems.”

British High Commissioner to India, Alex Ellis, said, “The UK and India are natural partners in defence and security. Today’s announcements underline our shared ambition for that partnership, enhancing cooperation, building joint expertise and accelerating industrial cooperation, building up to the arrival of our new aircraft carrier and its accompanying ships to India this autumn.”

These announcements follow the news that the UK’s Carrier Strike Group 2021, led by HMS Queen Elizabeth, will sail to India in the autumn on its maiden operational deployment.